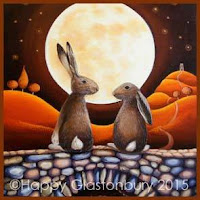 Summer officially ended here last week, as it did in the rest of the Northern Hemisphere, but more importantly- to me, at least- Autumn began.  Autumn is MY season, when  the night air turns chilly and there is a whisp of wood smoke in the air, and the leaves stripe the mountains with bands of color. Dusk comes sooner as the sun dips down behind those same mountains, and the night creatures cautiously come out : a cloud of little brown bats swoop and dance, squeeking in delight as they chase insects; the locusts ( foks in this part of Applachia call them 'cadydids') vocalize a catch and call tune; and deer quietly forrage for fallen acorns.

Life goes on in its own way. To those of us who are a little closer to the Earth and mind the signs of the seasons, it is nearing the final harvest before Winter sets store. We await the opening of the Veil, which for me always begins with a subtle hum and shiver. Death pulls back the curtain many times during the year, but never as wide as when the Beloved Dead cross back into the land of the living for that short yearly period of time at Samhain.

But until then...Life goes on in its own way. Nights are quiet, yet alive with the creatures who thrive under the shadow of darkness. I spend them mosty reading and sipping hot tea, lilting jazz music playing in th background, buried in the stories of others' lives, or learning new things about this spiritual path you and I have chosen.

Or is it more accurate to say we have been chosen by the Mysteries? I sometimes wonder which it is, and always come to the conclusion that it's both. My exploration of the Craft often flows along like a river, and with much the same turbulance, and often obstacles to overcome. But all is well, even in the rough patches. I have been a witch long enough to know how to ride the river-when to hold tight to my raft, and when to just let it wash over me.  Which ever happens...all is well....and there are no coincidences.

There is a reason and meaning for everything, as the song goes. Take for example the lovely rosemary plant I found at the grocery store a couple months ago: I watered it with care, and enjoyed its spunky, piney fragrance for weeks until one morning I was trimming up my window garden and realized it had died seemingly overnight. It sat there brown and shriveled, it's little branches still full and intact. I nearly threw it away in my disappointment, until I realized it would go well in some incense. So I carefully preserved it and put it away for use later. 'Later' came sooner than expected with the death of one of my favorite people. The rosemary I had carefully preseved went into a batch of incense I made up to burn in  her memory. Normally I would have only had a few spoons of rosemary to cook with and would have had to purchased enough for spellwork.

As I ground the herbs, it occurred to me that the little rosemary plant knew its purpose long before I did...and thus the Mystery did provide for a need. In the last few days I have made that same protective funeral incense two more times, in memory of a friend taken by cancer, and for another friend's father who passed away just this afternoon. Usualy I made this particular blend no more than once a year, usually at Samhain. But now...I have made it three times in the space of less than a month, and I will curate another batch to celebrate the crossing of the Veil by the Beloved Dead at the end of October.

It is a simple recipe: 1 part lavendar,1 part rose petals, and two parts rosemary. Grind the ingredients fine by hand, while speaking your intention over the bowl. Add by pinches to a burning charcoal. The incense has a floral, woodsy aroma. You can adjust the ingredients as you like. You can also make an offering oil version with fresh ingredients added to a light carrier oil such as sunflower oil. Let it sit at least a week and strain and shake befoe using.