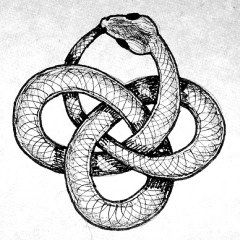 There's a theory that totem animals come from deep in the individual's subconscious, that something filters up through a repressed part of our mind to represent us. I'm not going to pretend I know the answer because I'm still working on understanding my spirit allies and where they fit in who I am becoming.

A few years back I began resonating with Hare. What came to me from this association was a deeper connection with the Earth and my own instincts. A popular association with the hare or rabbit is sexual, but this has never been the message I've gotten from Hare. It has always been about connecting to the Earth and my own inner wisdom; I'm still exploring that connection.

Most recently Snake has come to me. Snake strikes fear in many individuals, but I've never felt one way or the other about the creature. I think they're fascinating and beautiful, but I've never had any real connection to Snake until Rick Springfield came out with a CD titled The Snake King. I'm a lifelong fan, but I'm not obsessed with the guy, and I've never been a camp follower. (I got over the fan girl thing years ago, even though I was featured in a documentary about his relationship to his fan base.) I think he still makes some great music and I can relate to the meaning in his more personal songs. The Snake King has a bluesy vibe and a link to the dark side expressed by a character called The Snake King who's an amalgamation of voodoo's Baron Samedi ( Springfield does, in fact, own a suit coat with an image of the Baron on the back that predates the album, so I suspect he's versed in his meaning) Satan, and other taboo characters including a depression riddled part of Springfield himself. All these characters tell a story throughout the album, and there are actually some upbeat tunes that are ear worm worthy...but this is not an album review, so I'll move on. Back to the Snake King and how he introduced Snake to me as a spirit ally...

Snake often travels undercover in places the sunlight doesn't reach: in rocky outcrops, under the leafy forest floor, high among the canopy of trees, underground in holes....places of deep indwelling. The Place of Deep Indwelling is a reoccurring theme with me, especially during the dark Winter months when I settle in to study my Craft and explore my inner being. It would not be an odd occurrence for Snake to come to me under these circumstances, for snakes have an aversion to the cold. Snake appearing in the Place of Deep InDwelling is actually quite natural because he is a figure of renewal and the nature of rebirth. Snake hatches from an egg, sheds his skin in order to grow, and sleeps in a coil - birth, growth and the Divine Spiral. He's a creature of Earth, and among my totems, a natural to spiritually connect to the Earth.

Snake also connects to my Celtic heritage that incorporates spirals and coils, and serpents. The opposite side of Snake's character is that he is a healer of body and soul: shedding one's skin  (transformation) represents freedom from the burden we must let go of in order to move forward and grow. Snake is symbolic of the cycle of life and death.

There was a period of painful transformation in my life that lasted several years that I would have never foreseen as happening the way it did, a shedding of who I thought I was, of my comfortably self-perceived position in society. I lost my job and my wonderfully delightful apartment and moved from the place I grew up in and had lived for the first 40+ years of my life and was briefly homeless and adrift. Thankfully I was never out on the street, but I had no money and no permanent place to live. Friends kept the material possessions most important to me while I explored this phase of life and shed layers upon layers of parental and societal conditioning until I finally became someone I felt comfortable with being. Then I came out of the darkness, realizing that I had been forced to leave the place I was so afraid of leaving. I am by no means fearless now, but I am a lot less fearful of loss in a way understood through deep personal examination and a Buddhist-like understanding of attachment.

Then Snake appeared, as they often do, coming out from the dark place to bask in the warm and light.This is my relationship with Snake currently. I respectfully acknowledge it could change again, but right now, things are comfortable and stable. Life is not so bad, and Snake and Hare hang around just make sure I stay connected and awake. The Snake King ( the album and the archetype) keep me thinking about life, society and culture : our currently crappy political situation and what has brought us here, knowing what my personal appetites are and how they help and harm me, and my relationship to the gods. It's not a bad relationship, and I an kinda grateful for the bad stuff because it makes me appreciate the good things when they come around.

Meanwhile....I need to get back to a settled spiritual practice. I have allowed mine to fall away while I sit comfortably with my cup of hot tea and the distraction of reading. It's past Imbolc and the light is beckoning me from the Place of Deep InDwelling to the Place of Joyful Being. I am shedding the skin of last Winter and my new one, though still tender and a little raw from the old one being torn away, holds the possibility for something beautiful.