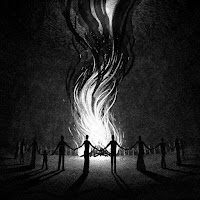 Last week, there was a (kinda) world-wide call for witches to bind US President Donald Trump and his gang of Deplorables. It sounded good on the surface because so many of us in the US are feeling helpless and afraid. There was even a Facebook page. I looked things over, as I often do, with passing notice and a lot of discernment.

Many well known Big Name Pagans (BPN) disagreed with the mass ritual for some very good reasons. A vlog from Rev. Don Lewis, Chancellor of Witch School and  Paramount High Priest of the Correllian Nativist Tradition of Wicca. Made some striking remarks as to why he would not be participating. https://youtu.be/0r9YYSYxZco

I happen to agree also. To begin with, no one individual or group claimed ownership of the event's organization. While I can appreciate anonymity, if you are going to going to call for a working of this breath and scale, then own it. I also had a concern about the organizers-who were anonymous, remember- asking participants to post photos of themselves in the act of ritual. Organizers calling for participants to in effect 'out' themselves to the public, while not willingly identifying themselves is highly suspicious to me. Perfect Love and Perfect Trust, if I recall how things are supposed to be. I don't think I'm being a bit paranoid, but among other things, it makes me wonder if someone other than a group of witches were behind the event. After reading the ritual onlinehttps://extranewsfeed.com/a-spell-to-bind-donald-trump-and-all-those-who-abet-him-february-24th-mass-ritual-51f3d94f62f4#.6y401v18e ( which, frankly seemed to be rather basic 101 stuff), I found some flaws.

The first problem I have is with the text, which sounds rather like what Hollywood thinks a binding should sound like. when you read through it, it's a pretty bland general wording. There is no justification for the action mentioned in the spell itself; specifics are not present. I found nothing disagreeable with the sentiment, but it, too, seemed a bit...vague. There were Judeo-Christian overtones that I suppose someone thought that made it sound somewhat like ceremonial magic (another Hollywood moment;all incantations sound like ceremonial magick, right?) with a little hoodoo thrown in for good measure.Just my opinion, but came off sounding a little chaotic to me. I admit that I got a giggle out of the suggestion of using a carrot in lieu of an orange candle. ( Not saying it wouldn't work, but it just struck me as amusing.) I was taught that a binding was serious business, and that it was done with specific goals in mind; the intention behind it was targeted and personal. I just don't this to be the case it this social media ritual.

And now-surprise!-a bunch of Dominionists are countering with a prayer event
...because...well...witchcraft. The whole thing has made me wonder if it wasn't a singularly big mock PR event carefully designed to give credence to Dominionist hysterics. Witches are cursing the President! It's up to US to stop them! It kind of harkens back to the days when Sarah Palin stood in the middle of a prayer circle receiving the warding and protection of a notorious modern day witchfinder https://youtu.be/iwkb9_zB2Pg  .

My personal belief is that you don't hex someone for their actions without careful examination of personal motive- and without the intention of an outcome that benefits the common good.If you're doing it because you simply despise Trump and his politics,that's the wrong reason. That sort of thing is better solved at the polling place by exercising your right to vote. However, if you're doing it in good faith as a pre-emptive measure, then accept any consequences and do what you will. Earlier this year, I published a spell written by a well-respected Witch Elder (who I did not name at the request of family members who feared reprisal.)It was not a binding, but a work with the intention of pre-emptively neutralizing a force gaining strength, intended not to bind, but to alter the course of events. I'm not saying what I personally chose was better, but I do believe that the intention was more focused and less maleficent. Was it intended to affect free-will? Absolutely. But the intention was not for personal gain, but rather to alter the course of events for the common good.

I am always open for new ideas, and I am always searching. Ashleen O'Gaea, from the Adventure Wicca Tradition, has this idea.The text is taken directly from her FB page, and she explains the intention much more clearly than I could. I believe that these points are focused, even if the method is open to personal preference.

From the Adventure Wicca Tradition: Any time on Wednesday, March 15th, the Ides of March, we're going to do whatever magic we can to protect the planet from any danger that threatens it. Focusing on protection, we will not be looking to do any harm, not even to those whom we believe might be doing harm to Mother Earth. Pagans and Heathens of all denominations are invited to use their magic, wherever they are, on their own or in groups, to raise protection from our planet. May our Gods help us!
People who don't identify as Pagan/Heathen are more than welcome to join this effort. Prayers, dancing, drumming - raising energy for the protection of the Earth from any/all threats is what we're doing, each in our own way.

Just a suggestion. If you find this speaks to your feelings, then I encourage you to do what you can, in whatever way you feel is proper and beneficial. If you decide to not participate, then I respect your choice. My personal belief is that magick without practical action to back it up is ineffective. Do what you will, but I urge you to get involved with the issues (Pick one! You cannot do everything) at the local level, write and call your elected officials regularly. Work for justice, peace and mercy; I think it's a part of the calling of the Craft. And not because I believe, but because YOU do.

May you Blessed Be!
Posted by AmethJera at 9:09 PM 0 comments