A Gathering of Wingnuts

September 23rd, 2015... Mark that day on your calendar, because according to the fundamentalist lunatic fringe, this is the date Satan will be given *full reign* over the Earth.

Oh, wait...Haven't we heard that one a few times before? Maybe more than a few times? Like maybe it's become a yearly thing now?

The sky is falling, folks. I have it on good authority from Chicken Little, Pat Robertson, and a whole herd of religious crazies on You Tube and the Internet. They're annual return is as dependable as the swallows returning to the Mission at Capistrano. And isn't it odd that all this rhetorical hubris begins every year at Harvest? Has anyone else besides me noticed that the dire predictions of Satan's domination begin annually during the same period as the ancient Celtic
(pagan) harvest festivals of Lughnasadh, Mabon and Samhain, and the Jewish High Holy Days in the Autumn? Or the Mexican feast of Día de los Muertos?

It's Harvest Season and the uber fundamnetalist wingnuts are ripe for the gathering.

Just in case the threat of the mythical The Evil One taking over the Earth isn't enough to make you and I quake in our proverbial boots and change our ways, there is also the added threat of an asteroid hitting us the next day if we don't repent post haste. Duly noted. I think I shall make myself a cup of tea so I can kick back and watch the festivities unfold...or not. Because correct me if I'm wrong, this cataclysm was supposed to happen before at the urging of the fundamentalist Christian soothsayer Harold Camping awhile back. You know, the guy who scared the boogers out of some good, abet gullible folks who sold off their belongings and gave him their hard-earned cash and life savings and caused a few others to commit suicide with his dismal warnings of The Rapture, only to explain on the day after we were all supposed to die, " My calculations must have been off."

I don't have a strong belief in coincidences, and I am not big on supporting conspiracy theories, either. ( For the record, Merriam Webster Dictionary defines a conspiracy theory as a theory that explains an event or set of circumstances as the result of a secret plot by usually powerful conspirator.) But I do find it of interest that a similar discussion of the coming of evil and the domination by a maleficent spiritual entity by Christian fundamentalist outcasts occurs nearly without fail every year during a period when there is a heavy concentration of festivals and ritual celebrations by other religions. I personally believe the timing of this event is a deliberately planned attack on the beliefs and values of religious traditions these groups feel threatened by, and that their resulting uproar and bellowing about conversion to worship their God is nothing short of  an exaggerated form of religious terrorism. I say that without the juvenile, whining tone of those who proclaim that there is a 'War on Christmas'.

If I recall correctly from my seminary days, this was the same the same type of  behavior Jesus was particularly repulsed by when it was used by the Pharisees to make their point about what and whom to believe. And while Jesus did indeed, by all accounts, enjoin his Apostles to be 'fishers of men', he also instructed them to leave alone those who choose to reject their proselytizing:
"We wipe even the dust of your town from our feet to show that we have abandoned you to your fate"
(Luke 10:11, New Living Translation).

So I'm addressing this to the fundamentalist wingnuts as politely as I can: "Bugger off."

Even your Messiah says so.

Posted by AmethJera at 4:53 PM 0 comments 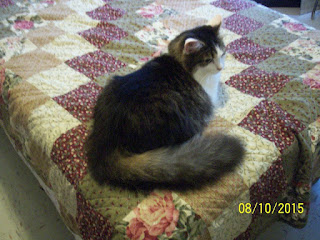 It has been 12 years since my familiar, Tinker, crossed over into the arms of Bast. I grew up in a household where we always had cats, and I missed having the weight of a little furry body on the bed at night.

Last week the neighbor two doors down died suddenly, and her family could not take her beloved pet due to allergies. I thought about it a couple days and made the leap of faith to adopt another cat. Here she is...We are just getting used to one another, and other than some territorial hissing over my potted plants and a few artfully placed scratches, we're getting used to one another. We are both set in our ways and the future will require a compromise, but I'm willing to make compromises because the truth is that it's a lot less  lonely with a cat to take care of and talk to...yeah, I'm going to be an old crazy cat lady, I'm afraid.

Tinker would approve.
Posted by AmethJera at 11:41 AM 0 comments