This time of year the early setting of the sun brings darkness at a time when we're just getting comfortable for the day. It's a time for candles, a hot cup of something, and maybe a good book. I use this time of year to study, to re-evaluate and discern my spiritual path in the hope of forwarding my journey authentically, with sincere gratitude.

Since I am a 'night person', the darkness is comforting. It is also the time that I'm my most productive and can take advantage of being uninterrupted by the busyness of others during daylight. I connect well with Midwinter.

By my own admission, I am a festival junkie. I love all the holidays throughout the year (although I have my favorites). I enjoy decorating because I love the special feeling in the air. Most of all, I love the celebrations that express our humanness and interconnection with each other and the world around us. For me, there is an archetypal energy that comes to the forefront, particularly in the festivals of the latter half of the calendar year. They feel like a doorway to other dimensions that we only feel at a distance at other times. There is a deep soul-level alignment from Samhain to Yule that awakens within us which I believe correlates with the myth of the Divine Child.

The birth of that Divine Child of Many Names holds eternal hope in our hearts: we continue in the mundane physical world as the earth receives returning light and warmth with every new day and nature around us slowly awaken from a cold sleep. Spiritually, we see the sacredness of life renewed in the birth of a child of potential which represents our future. We go innocently into the newness of Life mindfully, with the feeling of being surrounded by something undeniably holy. Perhaps for just a time, our communities are united and optimistic. Whatever we call our holidays and festivals, the energy is joyously the same and we are caught up in the wonder and love of it all.

Each year at this time the story of the birth of a vulnerable infant who survives despite being born in an unwelcoming environment with the odds against him echoes throughout many cultures and religious traditions. The motif of the Divine Child is a global one.

The noted psychologist Carl Jung created a list of archetypes which includes "the Child" and had some rather profound things to say about it. Jung's Child appears in our consciousness when we are at our most vulnerable. At a time when we are too emotionally weak and feel powerless, when there is seemingly no way to survive against personal challenge, the birth of potential and possibility takes place within our psyche. It survives and grows in that moment of deep despair when we are overwhelmed and ready to give up. If we are open and receptive to nurturing this newness, it becomes our reality, and that reality becomes a driving force to survive. Jung, who was well acquainted with the metaphysical, understood how to create thoughtforms.

Within everyone of us lies a spark of the Divine represented by this Child of Wonder. The birth of every child is holy. The knowledge of the ages are reflected back to us in the eyes of children, something we have lost as we become older and jaded by society and culture. We come into this world from Spirit bathed in light but soon forget who we are and where we came from. This is what I love about my Pagan spirituality-we have so many ways to remember we too are filled with the essence of divinity. We are god/dess in our own right, created in the image of the Universal Source. 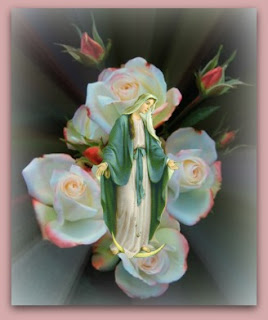 We are all familiar with the Biblical story of Mary and her husband Joseph, and the particulars of the birth of Jesus. It is a tale that's been told over and over ( more or less) in the same way for thousands of years by millions of people: how the couple made their way from Nazareth to Bethlehem to pay taxes and found themselves without a place to stay upon arrival; how a benevolent inn keeper allowed them to stay where the animals were kept; how Mary gave birth to a child supposedly conceived by the Holy Spirit-the Son of God-destined to become the Savior of a world fallen to sin. And so on and so forth.

Not meaning any disrespect, but if you found yourself yawning just now...well...let's just say you're not alone. We've heard the story so often for so long that it's become rather pedestrian and routine. Time for a cup of coffee and a cookie to keep the eyes from glazing over.

For all the holy hoopla surrounding Christmas, every account of Jesus' birth is astounding in it's lack of details. It takes several sketchy predictions from the Old Testament and all four of the New Testament Gospel writers to corroborate the linage and meaning of His birth. There is even less factual information about Mary: other than being the daughter of the elderly Joachim and Anne, being betrothed to the carpenter Joseph, the Nativity narrative, a fleeting mention of being a guest at the wedding where Jesus turned water into wine and the Crucifixion, there is scant else said about her in the Bible. This is pretty skimpy, considering the  extensive body of Mariology and Marian devotion in Christian and Eastern Orthodox churches worldwide. While the Christian core of Marian devotion in the West is centered in the Roman Catholic Church and has found its way into dogmatic teaching, the Eastern Church bases its devotion in liturgical rites. Meanwhile the majority of Protestant Christians believe Mary's divine mission was over when she gave birth to the Divine Child. She was,  in effect, historically cast aside and devalued as all women have literally and figuratively been after providing a male heir to continue a linage.

In fact, there is more written about Mary in the Quran, where she is mentioned throughout from beginning to end. She is the only woman specifically mentioned by name in Muslim scripture, where she is considered one of the most righteous persons in the Islamic religion. These texts not only speak to her divinity, but to the sanctity of her humanness. The nineteenth chapter of the Quran (Maryam) is named for her and talks extensively about her life. Her importance in Islamic culture and spiritual tradition is evidenced by the inscription of verses from the Quran relating to her on the walls of prayer rooms in mosques. According to Muslim sacred text, after her birth, Mary was dedicated to service in the Temple under the guidance of the prophet Zechariah, who was her uncle. She had her own special place in the temple for prayer, and was set apart as virtuous prior to the birth of Jesus.  (An interesting aside: the alternate meaning for the word virgin is a woman who devotes herself wholly to divine practice and is unimpeded by the preoccupation of husband, family and home life.  As a single woman she was owned by no man and was not any man's property. She was "of her own" by choice although fully capable of assuming the role of wife and mother if she desired.)

Through an otherworldly gentleness and spiritual nature, virtue, and personal resolve, Mary is the archetype of the All-Mother and is The Creator Mother personified. She is known by an endless variety of names- "Virgin Mother of God","Queen of Heaven","Holy Rose"," Immaculate","Rose of Sharon"- the list is exhaustive. She shares characteristics with nearly every mother goddess throughout history and transcends specific cultures as creatrix and nurturer. (Compare the births of Mithra, Osiris, Krishna, Horus and even the Buddha.) As such, she is the rightful "Queen of Heaven" in a more modern mythos.

I believe there is an ancient memory of the Great Mother in our collective psyche which accounts for  apparitions of Mary world wide. For every individual sighting approved as legitimate by the Church, there hundreds and perhaps thousands that are rejected or go unreported. Although there are some appearances of her that are seemingly incredulous, who's to really say what is and is not real? Entity manifestations often begin in the subconscious as thought forms. It's been psychologically proven  that someone desiring union with a divine entity can invoke the desired result (even if that manifestation is due to hysterical psychosis). To this reasoning, any appearance is valid. Belief in a religious context does not always require evidence other than individual experience; faith is the trust in that experience. In my humble opinion, it's motivation and intention that matters most. I think the Feminine Divine is alive in this world, and it doesn't matter what name we call her. It's how I, as a Pagan, can stand behind the Christmas narrative and the importance of Mary- by putting it in perspective along side the many other Great Mother/Divine Child myths in history. It isn't a form of appropriation from one culture to another as much as a need for the story to continue for all of us no matter who we are.

I rather like the image of Mary as Rosa Mystica, as found in the writings of Saint Brigid, in which Mary herself tells the saint ( I'm paraphrasing here for clarity): "... The rose gives a fragrant odor; it is beautiful to the sight and tender to the touch, and yet it grows among thorns, unaware of its beauty and tenderness. So may those who are mild-tempered, patient, and beautiful in virtue be put to the test in the world. As the thorn guards the beauty of the rose, so does adversity keep us from wrong- doing by the example of its destructive nature." It fits with my definition of the Feminine Divine which equally shares strength and power.

In Pagan theology, we are all God/dess, co-creators who share in the Divine Mysteries of Birth, Living and Dying and everything that lays between them with the gods. As a woman and priestess, I can connect deeply to this, more deeply than when I was a part of a faith tradition founded by men where I was stripped of my inherent worth and dignity and considered second best as a human being. I say these words without anger, because I also believe that to get to the place of spiritual confidence I have today, I had to have gone through that experience. I believe it's true that everything is a lesson. You have to start and leave somewhere in order to make a journey. It is a journey I make guided by the Mystical Rose along a path of my choosing. Here we are joined, and I, too, am Mary. I carry within me the Divine Child of possibility and wonder which is in constant renewal. And I'll tell you a secret: I'm not always enraptured by knowing this, especially when I realize the responsibility it carries. Being a priestess of the Mystery of the Holy Rose has both its exultant glory and its unfathomable burdens. And while I'm being candid, both scare the hell out of me for a lot of reasons.

So in this period of personal discernment in the weeks of waiting before Winter Solstice and Yule, I'm going to work on being a little less scared and less doubtful of my abilities. I'm going to try to be less pessimistic about my fellow human beings, a little more hopeful about the world, and more grateful about all of it. I'm going to remember I have the Divine spark in me, too, and see magick and wonder at every turn. And maybe, just maybe, the Mystery of the Holy Rose will bloom in me.

Posted by AmethJera at 8:10 PM 0 comments