The Devil Made Him Do It

The U.S. government has charged the 22-year-old Jared Loughner with trying to assassinate Rep. Gabrielle Giffords by shooting her in the head during a rampage that killed six people and wounded 14 in Tucson, Arizona.The Associated Press says that college  friends "paint a picture bolstered by other former classmates and Loughner's own Internet postings: that of a social outcast with nihilistic, almost indecipherable beliefs steeped in mistrust and paranoia."

The descriptions of Jared Loughner sound eerily similar to descriptions for nearly every mass shooter of the last decade: a loner, delusional and obsessed with hatred about local authorities. They are almost exclusively male, and extremely angry with a system they cannot control; narcissistic with a lack of social inhibition, they are often just dismissed as 'loudmouths' and 'blow-hards', the severity of their disorder not recognized until it's too late. Jared Loughner had one additional disturbing trait: he used lucid dreaming as an alternative reality.

Lucid Dreaming has gained popularity in the occult community over the last 30 years since the phenomenon was re-introduced to the public as a form of mind expansion and exploring the collective unconscious by followers of Jungian psychology.  The theory of lucid dreaming is that after you recognize your dream state, you basically write the script of the dream. By lucid or purposeful  introduction of yourself into the dream, the  you gain control of this sub-conscious level of reality to explore deeper layers of the psyche and connect with the divine. Scott Cunningham wrote an excellent occult treatise on the subject titled Dreaming the Divine. His book touched on dream incubation as a form of spirituality, a communion with the gods when the mind was unencumbered by the cares of everyday reality. The type of lucid dreaming practiced by Jared Loughner was not a benign joining of one with the spirit: it was a slow, heinous take over of his mind by the shadowy self, the place where the mind is open to the whim of  lower entities and personal demons. Simply put, this young man had made himself available to a form of possession and suffered from a very serious form of mental illness, a place where slights and snubs were roiled into a stew of bitterness and madness. According to a female friend, he kept a dream journal of his torment, and that will be a key piece of evidence in his conviction in the shootings.

Another disturbing element of this case was recently introduced by the New York Daily News- hardly what I would personally consider a legitimate piece of journalism, but one read by millions daily, none the less. The NYDN has existed on such journalistic gems as seeing the face of the Devil in a cloud of smoke pouring from the World Trade Center just after the jet strike, so when the story broke earlier this week that ' ...a shrine of occult items' has been found at Loughner's home, I was hardly surprised. 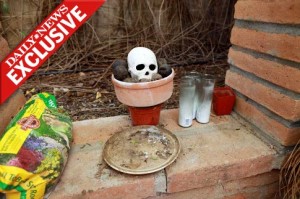 “A sinister shrine reveals a chilling occult dimension in the mind of the deranged gunman accused of shooting a member of Congress and 19 others. Hidden within a camouflage tent behind Jared Lee Loughner’s home sits an alarming altar with a skull sitting atop a pot filled with shriveled oranges. A row of ceremonial candles and a bag of potting soil lay nearby, photos reveal. Experts on Sunday said the elements are featured in the ceremonies of a number of occult groups.“

What better way to tap into the fear of the Arizona Bible Belt than to indicate that this monster was into a form of occult activity. They stopped just short of calling it Devil worship or Satanism. This elevates him from being The Other to being The Evil Other; it sells newspapers and sets tongues wagging. More to the point, it once again slanders Pagans and makes them guilty by association in the minds of the uninitiated, uneducated public.


Despite what Pagan media has protested as being, " a collection of left over, cast-off Halloween decorations", this photo clearly  depicts an intentionally sinister tableau to me. Whether it was constructed by Loughner-or possibly thrown together by an over zealous paparazzi- is not known. What is glaringly apparent to me is that it was constructed to represent something of an occult ritualistic nature, even if that only existed in the shooter's own twisted mind.Denial by the Pagan community of such an obvious attempt at ritualism will only damage our reputation. Better the 'experts' had responded, " It's definitely something of a ritualistic nature, but we don't know what it means." than the lame," Obviously, this is just some stuff thrown together." All the elements of some sort of ritual are present: candles, a skull, (rotted) oranges, a pattern. I can make an educated guess that it might have been the attempt of a sick mind to make an offering of some sort to a death deity or even the components of a spell. But it certainly doesn't appear to mean nothing, and it doesn't necessarily mean it was a part of any known occult group. That is a secret that may be revealed in the dream journal of Jared Loughner, or exists exclusively in his demented mind.

Posted by AmethJera at 6:31 PM