The AntiChrist in the Mirror 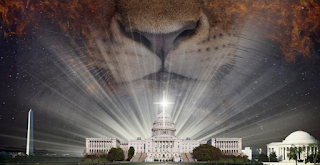 So the Dominionists have now formerly declared spiritual warfare on the 'pagans'. As a matter of perspective, that's not just Pagan with a capital P, but Jews, Buddhists, Hindus-people of all faiths other than their own-including mainstream Christianity. (http://pncminnesota.wordpress.com/2011/09/14/dc40-to-pagans-we-release-the-power-of-blood-covered-light-over-you/)
Join the club- we're all being lumped together by the likes of Cindy Jacobs and her band of zombies.  Jacobs a self-proclaimed prophet and televangelist from Texas, has been quoted as saying abortion, adultery and homosexuality is caused by a curse of violence upon the land where it was previously inhabited by Native Americans  who “did blood sacrifice” and “were cannibals and they ate people.” Watching Jacobs speak reminds me a lot of the crazy guy we've all seen on the city bus; you know, the one everyone lets sit in the front alone because they're a little concerned at what he might do.The look of intense lunacy is unmistakable.

"We release the power of blood-covered light over you."

I guess what I find the most disturbing is that they did not indicate this was the blood Jesus shed for the forgiveness of sins according to Christian doctrine. I could take that in a much more sincere and logical manner. They did not connect it at all with the Blood of the Lamb of God. It is not the symbolic smearing of blood on the lintel to fool the Angel of Death and make him pass over the innocent. Neither was it said in the in the spirit of  Kyrie Eleison (Greek for " Lord have mercy"). It does not mention the power of Jesus as Light of the World. It does not mention Jesus at all. It does not mention the sacrifice of their god for the forgiveness of supposed sins.

What it says is carefully worded and crystal clear: it is meant as a curse.

If you cover a source containing light, it mutes the illumination and casts that light in darkness. And the darkness they project, for all intents and purposes, is not connected to the shadow self, but farther  beyond, from the lowest realm of existence where evil entity dwells. These are nothing less than malefic magickans intending harm through occult means.
How can I be certain of this? Because true Christians believe that they are capable of nothing unless they invoke the name of Jesus as the agent of Yahweh and the Dominionists have never named their God. Not once. I have never seen mention of a personal pronoun for their god. And I suspect the reason for that is because what they leave out of their very carefully worded missives is the truth they don't want the rest of us to figure out- that they are bunch of misfits who have been rejected by conventional Christianity. Mainstream Christianity has kicked them out of the fold and to the curb, and because of this they have become a cult of haters who have created their own god. Their version of God is an angry, malevolent tyrant who is vengeful upon the whole of mankind: it is a god created in their own likeness, yet they cling to the hem of the garment of the Holy One of the Bible to appear credible to the media and the mainstream. Remember the verse about being wary of evil coming in the guise of a  Messenger of Light? He's here-and his name is Dominion.

They are the antithesis of mainstream Christianity, and I personally believe they mirror the commonly held Biblical description of the Antichrist.

"The devil . . . has their souls in his possession, and under his dominion" (Jonathan Edwards).
I find it interesting that nearly all the online dictionary sites use this quote among  the definitions for the word 'dominion'. This is the only religious reference; the other are political or geographic. There's just too much of coincidence here for me to ignore. They could have chosen to call themselves anything else other than Dominionists...and I suspect that's why we are now seeing new names for them, ones that sound ever-so-slightly more acceptable to the Judeo-Christian mainstream ear: ' New Apostolic Reformation', 'Christian Reconstructionism', 'Neo-Calvinism',' Christian Nationalism'. Could this be be from a growing self awareness that their acts are so shameful that they are now becoming ashamed of their own chosen identity?(http://noodleepoodlee.org/2011/08/22/onward-christian-soldiers-%E2%80%93-dominionists-revealed-as-wolves-in-lamb-of-gods-clothing/)


As to your curse of blood-covered light, I respond, not in kind, but with a message- in plain language you will understand: you have no power over me. Likewise, as you do not now, nor will you ever have power over this country, founded by those who rejected the dominion and tyranny of  those like you. As the founders and citizens of this land were once willing to fight then for their right to the freedom to worship the gods of their understanding- or choose to worship no gods at all- there are those who are willing still to defend that freedom today. We cherish the foundation of our Constitution, and the chosen symbols of our Union because they are sacred to us. That which is declared by men as  sacred in both heaven and earth for the well-being and dignity of all is sealed  forever in the holiness of the Universe by the spirit of humanity. I rebuke your maleficent words and deeds, bind them, and cast them aside like chaff in the wind. You will not prevail...Be gone!

Posted by AmethJera at 8:09 PM