On a Lazy Afternoon 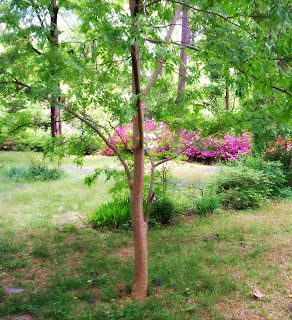 The first five months of the year have gone by amazingly fast; I have no idea where May actually went, except that it is irretrievably gone. Gone. And I have no flippin' idea where it went or what I was really doing during that time. other than putting order to my life...a big task in itself, but nothing that should have let an entire month slip by practically unnoticed on this blog.

So here I am today, as the late afternoon slips into early evening, enjoying the stillness of an empty house and the sun shooting golden streaks across the floor of the room where the computer is located, buffeted by a gently rotating fan to hold back the sudden surge of heat. This is, of course, The South. Heat is a notoriously Southern characteristic this time of year, one which adds to the charm of the region.

Only two days into June, and I want to spread myself out on a lounge chair with a large glass of iced (not
too) sweet tea, enjoying the chirping tree frogs, the magnolias and watching for the occasional fox  meandering across the back yard. I want to sit beneath the low moon in the sky and watch fireflies, and do read. Summer is three weeks away, but already I can feel the urgent pull of the season of plenty.

***
I have stated before on this blog that I am not a "Summer" person; living in humid The South has certainly not changed that. I am not thrilled by heat, humidity, baking myself in the sun, or sweating. My
Scot-Irish/German/Italian complexion and red hair bear testimony to that. I burn too easily, and I am allergic to many sun blocks on the market...so I am a reluctant participant, continuously seeking shade and a cooler spot in the yard. I am content to watch the flowers reach up to the sunlight at mid-day between chapters of a not too serious 'Summertime' novel. This summer, if everything goes smoothly and I have moved to the Virginia mountains as I am planning on doing, I will attempt to tackle the Deryni Series by Katherine Kurtz, volumes of which have sat on the upper most shelf in my bedroom collecting dust.

***
One thing in particular I will continue working on is my personal solitary practice. It feeds me spiritually and emotionally and I think the introspection makes me a better person. I know for a fact that it makes me a better writer, because I make the time to be alone with my thoughts. I love the spiritual head-space the Irish call The Place of Deep In-Dwelling. It's my 'happy place', although it's not always comfortable to be there. More than just "thinking just good thoughts", it's where I work through my thoughts and wrestle my personal demons. Sometimes it gets crowded down there, and even though I'm by myself, I am rarely alone.

A tool that I've found particularly useful is Teo Bishop's liturgy from the Solitary Druid Fellowship. Perhaps it's because we both share the same background in the Episcopal Church, but the language and form he uses is comforting and familiar. His most current blog from Bishop in the Grove centers around using contemplation as a devotional technique http://www.bishopinthegrove.com/archives/contemplation-is-right-action/. I have to admit that this is something I've done most of my life and haven't had to think very deeply about, because it came naturally. In the early days of my spiritual practice, before I ever attempted to name it, I would go somewhere comfortable and settle into an attitude of meditation (usually in nature, but there are numerous indoor spots I favor, also). After a period of mindfully being in my head, the prayers, or devotions would simply flow through me; that this happens spontaneously still amazes me. Even though I say it happens spontaneously, I'd like to think there is some input from the Imminent Divine in all of this so it's a conversation rather than a monologue. I think that Teo has nailed that in this post, and so I'm recommending it as a starting point if anyone is interested in incorporating it into their practice.

As I am writing this-laptop on the table in the screen porch- there is a fat grey rabbit happily munching on the plants about three feet from the tree in this above photo. It is voracious and determined, totally ignoring the human at the table and the tapping of the keyboard. It is a wondrous and serene moment in the dimming light of late afternoon, one of those small gifts of the natural world that is only dispensed in small doses.