Jung-A Mystic For Our Time 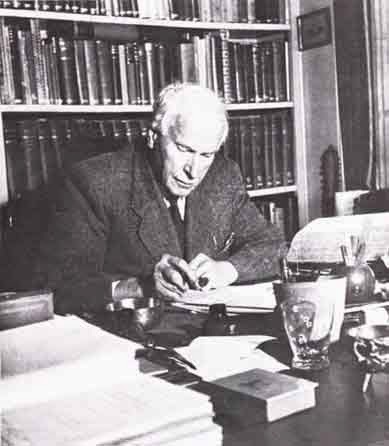 The teachings of Dr. Carl Gustav Jung ( pronounced "young") are one of my passions. So much so that when I finally decided to pick a psychological discipline with which to align myself while I was working on my counseling degree, I chose Jungian Psychology.

My first exposure to Jungian thought was through a self-help group sponsored by the Center+Point Foundation. We met as a coterie weekly to apply Jung's theory of self-integration and growth potential to areas of our lives. It was the 70's,what can I say? All my friends were going to est, and I certainly couldn't afford to spend that much money on developing my psyche at the time. ( Later I did got to both est I and II, but to be honest, Center+Point was the better investment, in my opinion. It's certainly the one that's benefited me the most in the long run. It's been over 35 years now, and all I can remember taking away from est was that they controlled when you got to go to the bathroom, the bastards.)

C.G.Jung was a Swiss psychiatrist, a friend and contemporary of Sigmund Freud. They shared a lively friendship, mostly through correspondence. That ended after many years when Freud asked Jung to give him his opinion on a particular dream he'd had. I take it the explanation Jung came up with was less than flattering to Freud's rather largely inflated opinion of himself; to make matters worse, it was later discovered that Freud withheld details of the dream that he thought would usurp his authority in the psychiatric community. Jung had deduced correctly what those details were and he and Freud parted company acrimoniously- but not before Freud publicly accused Jung of casting "death wishes" upon him during another encounter where he fainted ( Which I suspect was due more to Freud's own hysteria than to any malefica  from Jung.) [ Freud A-Z,pg 103 by Susan Heller,2005 ;published by John Wiley&Sons,Inc.] The suggestion so affected  Jung  that he plunged into a depression during which he had vividly lucid dreams about death. During this period, Jung became intensely interested in all things death-related, so much so that it influenced the writing of his Seven Sermons to the Dead (using the pseudonym of Basilides). He described the dead as "...the voices of the Unanswered, Unresolved,and the Unredeemed."[http://en.wikipedia.org/wiki/Seven_Sermons_to_the_Dead ]

But wait a minute...weren't these two supposedly learned men of science? They were indeed, but I wonder if Freud's knowledge of Jung's numerous encounters with the mystical that began in his childhood (he'd experienced psychokinesis,precognition and clairvoyance at a very early age), hadn't lodged its self in a dusty corner of his mind, only to prey on the psychiatrist's own fear of the occult.
Both Jung's mother Emile and grandmother Augusta were known psychic mediums. It would follow that Carl would have a natural curiosity and a better understanding of this subject than most of his contemporaries, wouldn't it? As it turns out, it not only was, but when Jung learned that his 16 year old cousin was also a medium, he enlisted her assistance in helping with paranormal experiments that became the framework for his doctoral thesis," On the Psychology and Pathology if So-called Occult Phenomena", published in 1902. Four years later he published one of his most significant works,The Psychology of Dementia Preacox [https://archive.org/details/psychologyofdeme00junguoft]After that, he received several impressive honorary degrees in succession from universities in his home country and Harvard,Oxford and Clark University in Massachusetts. He'd also been appointed as the President of the International Congress of Psycho-Analysis (1910), but resigned from that and an esteemed professorship at the University of Zurich. Desiring to distance himself from the mainstream, he began an almost obsessive preoccupation with mythology and dream work. [ The Portable Jung,edited by Joseph Campbell, published by Penguin Books,1976]

He began to work on the development of his general theories on psychological types and archetypes in earnest. Out of this period came his definitions of introvert and extrovert and the four basic functions of thinking, feeling,sensation and intuition; the collective unconscious, and anima (feminine) and animus (masculine) principles.

Jung's theories were powered by insight into the workings of his own psyche. He closely examined his dreams and applied his own unique understanding of spirituality to interpretation of religious symbols. He was a student of both Eastern (Taoism,Hinduism) and Western religions (Christianity and Gnosticism), and his spiritual leaning were best described as eclectic. He believed in occult phenomena and the paranormal because he'd experienced it first hand. As the line of demarcation between his dreams and visions began to blur, he penned the enormously popular and autobiographical Memories,Dreams and Reflections,which he continued to work on until his death on June 6,1961.

In 1944, Jung had had an out-of-body experience (OBE) after a heart attack where he saw himself high above the Earth, where he saw a temple made of stone. He felt called to go inside this temple to learn the meaning of life. But before he could do so, he was called back by an apparition of his attending physician, who'd taken the form of the Heal of the Temple of Asclepius (the Greek god of healing) who commanded him to return to Earth because he work was not done. Jung's near-death experience was confirmed by a nurse who witnessed him being surrounded in a white light.

After the death of his wife in the 1950's, he retired to Bollingen, Switzerland and began to build what amounted to being a castle on the property he owned. Into the stone walls he had mystical and alchemical symbols carved. During the building of this castle he updated many of his published works on the mandala, synchronicity and the I Ching. These re-workings became his opus, Aion [.http://www.amazon.com/Aion-Researches-Phenomenology-Collected-Works/dp/069101826X]

Jung was an ardent believer in reincarnation; much of his feeling on the subject came from the Tibetan Book of the Dead. He was quoted saying that his existence was based on " ...a passionate drive for understanding in order to piece together mythic conceptions from the slender hints of the unknowable."
[Harper's Encyclopedia of Mystical and Paranormal Experience,Rosemary Ellen Guiley, 1994] Like many of us today, he feared for the future of humankind and stated emphatically that our saving grace would be our becoming mindfully more conscious as a species.

Just prior to his death, Carl Jung had a dream in which he became whole ( a reoccurring subject in his writings about personal integration). I believe this meant that his individuation had become complete and he had reached the pinnacle of human growth. In this dream, he was himself symbolized as a tree whose roots were interlaced with gold-the metal associated with completeness in alchemy. On the night he died, a particularly violent storm arose on Lake Geneva in which lightning struck his favorite tree. Coincidence? Synchronicity? Stranger things have happened in this world.

Carl Gustav Jung left a legacy of thought that is applicable to all forms of occult and academic traditions; little wonder so many Pagans gravitate to this great mystic of our time.