Do You Hear What I Hear?

In the mountains this time of the year we awake to find our little town enveloped in a thick blanket of mist. The fog often creeps silently through the streets during the wee hours, distorting the glow of streetlights and hiding all but the steeples and the tops of telephone poles. The recognizable is obscured and the landscape changed into a soft, melting ooze of shape and color. 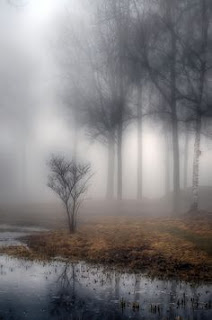 Summer, too, fades and then softens. Already the trees are beginning to turn in the cool of night, the edges of their leaves turning brown and curling and their bodies spotting as the vitality of Summer drains from their veins. Our Spring was colder with more rain than usual and that rain-too much of a good thing-stunted the new growth of plants and grass. A single crocus dared to poke it's tiny head out of the ground and lived but a day. The azaleas were stronger in their presentation, but they,too died off after only 10 days. Wild violets appeared on unusually leggy stalks, and the sweet peas which grow in abandon here were less noticeable. The mountain dogwoods were the only blossoms to stand up to the shift of temperature and moisture, and even their ranks appeared thin. Summer finally came, but it has seemed unusually short this year.

Autumn, on the other hand, is knocking at the door already. Back a couple of weeks ago my friend Austin commented about feeling the vibration of the Earth, that certain thrumming that heralds the opening of the Veil that continues to build until Samhain. I have felt it too, the steady crackle of electricity in the background; it is especially noticeable to me at night, and particularly when the town is shrouded in fog. I think the new resident feline does, too, because even though the nature of a cat is nocturnal, she is more restless than she should be. We were up at 4 a.m., both of us, staring out the living room window into the thick fog, knowing that something was out there, silently waiting.


Like a lot of Pagans I know, I am better able to connect with my spiritual side after dark. Maybe it's just the power of suggestion, but my psyche seems more open between midnight and the first light of dawn. Without meaning to sound dramatic, I am what the occult author Konstintinos refers to in his books as Nightkind, a particular type of individual who connects more solidly in the dark ether than in the daylight. Because I am more open then, my sensitivity to the vibration of things around me is measurably heightened. I do most of my studying and spell work at night, when I feel I can focus clearly on the ask at hand. I save the daytime for the practicalities of the mundane life - cooking, cleaning, shopping, social exchange with the neighbors. The nighttime is mine. The cat thinks so, too; she seems to be more interested in me at night.

We live in a small valley, basically in the middle of nowhere and sound echoes at night. Crickets and katydids sound ten feel tall, and I am able to distinguish the difference between the twittery bats and night birds. The whistle of the train that runs just on the other side of the mountain has a rich, throaty echo, a long, low moan that I love to hear. There are times when it's so quiet you can practically hear the stars shining. And then...There is that buzz just below the level of normal hearing that's more vibration than auditory. It surrounds the town and enshrouds it. Maybe it's simply the sound of the Earth in repose as it regenerates and restores herself.  Whatever it is, it draws my attention more at this time of year, and the only thing that interrupts it at night is when a leaf breaks free from a branch and lands on the sidewalk below the window with a subtle clink. Perhaps it's just the sound of Autumn as the seasons change. Maybe it's something else.

Posted by AmethJera at 1:31 PM

Email ThisBlogThis!Share to TwitterShare to FacebookShare to Pinterest
Labels: Autumn, End of Summer, Opening the Veil