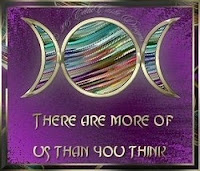 Why do Pagans worry so much about who is a  "legitimate" Pagan and who is not? I mean, really, whose business is it anyway? I can see the point made by those who have been initiated into a specific tradition: if someone claims to be of a particular tradition and is, in fact not initiated in that tradition yet takes the name, then they are not acting within the established right to make certain claims within the accepted authority of that particular group.

Twenty years ago I was adopted by a community of the Gros Ventre and Assiniboine tribes and given a Native American name. It's a huge honor because I am welcomed as a relative and included in their rituals. But much as I am intrigued and respect Native American spiritual tradition, I am not in fact a Native American and cannot legitimately perform particular rituals that are the providence of birthright. So it is with some traditions of Witchcraft and NeoPaganism.

As much as we Pagans, Witches and other Occultists loudly assert that we are unique individualists and eschew dogma out of hand, the fact is that when one studies and is accepted into a group, we in some way share their unique dynamics and express it as what was identified  as far back as 1893 by sociologist Emile Durkeim as the 'group' or 'hive' mind. That doesn't mean Gardinerians, Alexandrians or any other formally structured traditions are The Borg personified. The tendency for individual expression is still there; it's a bit of an oxymoron to say that members of the group believe alike separately. Unless there is an element of brainwashing present ( which makes the group a cult), Members are free to interpret the material in their own way as long as the core belief is kept intact. It's all relative. People unconsciously attune to a particular vibration and project that in ways outsiders can't.

Beyond that, I still want to know whose business it is what anyone believes or why or how they go about it. Because what goes on between you and your gods, how you express your faith or what you believe is up to you. No one gets to tell you you're doing it wrong- with  the exception doing harm to another or an act that is outright deemed illegal. We don't get to incorporate minor children into adult activities they are too immature to understand or agree to. We don't get to touch others in ways that are offensive or inappropriate. We don't get to manipulate others against their will to do things they are morally or ethically against, or they flat out find in conflict with their own beliefs.We don't get to force our individual beliefs on others or condemn them for not playing in our individual sandboxes.

There are, In my humble opinion, far too many of us who are eclectic, solitary practitioners to make an argument about legitimacy authentic other than within the confines of a particular tradition. A lot of the argument appears to me to be nothing more than posturing and pissing in other people's cornflakes because someone can't get their own way.  Fyre Lyte made quite a few Brownie points with me when he created Project Pagan Enough:http://www.incitingariot.com/p/project-pagan-enough.html. PPE is not an end all by any means, but I think it's a good start. Each of us can flesh it out from there for ourselves to a point where we have something we're comfortable with, because here it is: it's impossible to make everyone happy. The best we can do is agree to disagree and be respectful of that without the name calling and middle school mud slinging that usually ensues when we have this discussion.Tolerance is not blind acceptance.Tolerance is allowing the space for discussion to exist. I'm not saying we should stop having this discussion-not at all, because I think every time we have it we learn something about ourselves and each other.

Having said that, let's move on...and tend our own gardens. I don't know about you, but I have a lot of rows to ho and work to do to keep my spirit fed and nourished.