Coexistence: Spirituality, Science and My Way 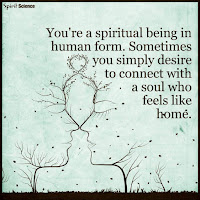 Simple spirituality was formed out of our human need to connect with Mystery. I believe that even those who profess to be atheist are still hard wired to have questions about the deep Universal truths and Mystery. Everyone wonders where we came from, how we arrived where we are, and why we're here: those questions are etched in our very souls. Humans have had those questions for thousands of years and have not, despite developing countless means of doing so, managed to answer them- at least not satisfactorily. And we may never do so. That is the Nature of Mystery.

I am trained in both Religion and Science and hold post graduate degrees in Comparative Religion and Psychology. I never thought of the two to be at odds with each other, so I suppose that's the reason I find answers in both with little conflict. At one point in our human history, the two were yolked together, both sides of a single coin. One did not exist without the other: The Church, that bastion of belief and superstition, slowly begat Science through the evolution of its Colleges and Universities, until the two finally branched off into the individual disciplines we know today. But it wasn't always so, much to the chagrin of the practitioners of each.

Those who cleaved to the Spiritual side became the keepers of  the non physical part of being: soul seekers, sorcerers, wizards,witches, and initiates of various theologies. They were priests and priestesses, and interpreters of the occult. Likewise, Science begat scientists, explorers of the natural order who looked to the stars and culled the study of intellect and practical reason. They eschewed the pneuma in favor of bodies of knowledge and processes.

It remains my humble opinion that the two can coexist logically and to the benefit of all. There will still be parts that will be with odds of one another, but those parts will eventually be explained, as they are being explored continuously and new theories formed everyday. The Craft is, after all, the place where belief is suspended- spiritual and scientific. The Craft is an experiential entity. It is different and unique for every individual who has ever tuned into the vibration of a crystal or combined herbs in spell work, or cast a circle or simply stood in silence with the gods.

Laurie Cabot, the 'Official Witch of Salem' explains this wonderfully: the Craft is a system that combines religion, art and science to utilize the magickal forces of the Universe and nature. There is nothing demonic, nothing supernatural about it. Anyone can use magick with work and practice, and in fact, that which is loosely defined as Occult is not hidden when brought out of the shadows. More on Laurie's thoughts can be found here:https://www.lauriecabot.com/understanding-witchcraft .

Many years have gone by, and I still practice a Craft which is fully immersed in Nature and the Mysteries. At times I use the example of archetypal gods and goddesses that allow me to clarify the intention behind my work. I have patrons across several pantheons who speak clearly to me and to whom I connect spiritually, and my rituals are highly personalized. This is what works for me and what I depend on to shape my spirituality. You may do things differently- as it should be. I will admit that there are elements of practice which make me cringe, but if they work for others? All is right for them. I will keep my way as you keep yours.

May you be blessed by your journey and discovery!

Posted by AmethJera at 7:15 PM

Email ThisBlogThis!Share to TwitterShare to FacebookShare to Pinterest
Labels: individual practice of the Craft, Religion, Science