Not Just Some Old Cat 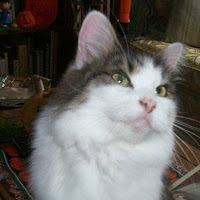 My beloved feline companion and familiar Kitty Boo passed away at the local vet hospital sometime during the night of September 21st from kidney disease. She was approximately nine years old; I'm not exactly sure how old she was because she was adopted as a rescue. Her first human Mum had drug and alcohol abuse related  issues and she was suddenly found dead two apartments down from me. Her daughter lived thousands of miles away and was allergic to cats; she was willing to take Boo, then named Muffin, but said the poor little creature would have to live outside-something she'd never done in her life. Ragamuffins are simply not outdoor cats. So together- and with Boo's permission- we made the decision that she should come to live with me.

I had been living a cat-less life for over twelve years after the death of my first familiar, Tinker. And frankly, as much as I loved and missed Tinker, I was enjoying not having the responsibility of caring for another and only myself. I was just coming out of a very rough period of my life. My emotional energy was limited at best. Gathering myself together and evolving into the person I have become took a lot of effort...and then this wonderful creature came along. We both needed each other. I think Boo rescued me and brought me home as much as I did it for her.

I often said that if Boo could talk she would have some fabulous stories to tell; even though she was never physically abused ( to my knowledge), she'd been emotionally neglected as her first Mum struggled with her addictions.The drugs had made her Mum neurologically sensitive, and she'd push Boo out of her lap. Boo lived the first five years of her life cowering in the bath tub or crouched on the bedroom window sill.  When she did come out to eat, she'd quickly scurry from the kitchen and hide to stay away from the constant stream of drug addicts, police and paramedics and all the other traffic that rambled through the apartment.

I was sure that I really didn't want another cat. For ten days after her Mum's death, while the apartment manager feed and cared for her, Boo spent her time crouched in the window between the blinds and the glass, her head bowed, curled into a ball of fluff. I approached her one day and asked through the window if she'd like to come home with me, and she looked straight into my eyes and cried out. The next day, as the manager continued to clean out the apartment, she was brought to me wrapped in a bath towel and put into my arms. She didn't struggle to get free- but she did cry...really, actually cried, vocalizing repeatedly with tears running from her eyes. We cried together. She became known my many affectionate names: Madam Muffin von Wigglebutt, Boo Boo, Kitty Boo, and I made up silly songs to sing to her.

A little over two years ago, when I had emergency heart surgery, I had to spend three months in rehabilitation recovering and the thing that kept up my desire to come home was knowing Boo was there being cared for by a neighbor. The night I returned, Boo sat on the back of my chair with deep concern in her eyes, connecting with me. She climbed down into my arms and touched my face with her paw. My neighbor took a photo of us. It is now one of my treasures. From then on, Boo would climb up into my arms several times a day to be held and talked to; when I returned home from shopping, she leaped into my arms from the floor. She'd often sit on my shoulder when I sat down to a meal. She liked to sleep alone in the living room in her kitty bed, but when she heard my alarm clock, she'd come into the bedroom, hop up on the bed and " make biscuits" on me to make sure I was getting up to feed her. She had the odd habit of dipping her paw into her water bowl ( and any glass of water I had) to drink from it. No glass of water was safe from this ritual. She even drank from my water offering bowl placed before the Buddha.

Kitty Boo showed no signs of her final illness. Cats are notorious at hiding sickness and pain. She simply stopped eating one day and by the next day I took her to the vet, even though she'd ate a few bites and drank some water that morning. She seemed to be rallying and followed me around the apartment. Dr. Wallace made a lot of tests, took x-rays, and came back with the news that Kitty Boo was gravely ill, but that she could recover. She did have hope that a weekend of IVs and medication would improve my furbaby's condition, but cautiously told me it could go either way. Had I known Boo was going to die, I would have taken her home with me until the end came so we could have been together. It was not meant to be. The tech on duty assured me she'd been in no pain, that she'd even eaten a few bites of food...but that she'd gone to sleep and simply never woke up. The best way, I think for both of us...a simple crossing to the next world. I am relieved it did not come to the point of euthanasia, which was my biggest fear.Still, I feel as if I deserted her to the kindness of strangers and bare a degree of guilt in that regard. I am grieving her loss deeply.

The evening she died, several odd things happened- things that reaffirm my belief in the afterlife. Around 10:30 P.M. I hear a cat meow. I am sure it was Kitty Boo, who had a soft, distinctive voice. It was only one meow, just enough to get my attention away from the book I was reading. I'd lit a prayer candle earlier for her, a candle of hope that the call I got from the vet in the morning was good news. There was no movement in the room and the windows were closed; no breezes stirred. I'd looked up from my reading when I heard that single soft meow, and the flame of the half burned candle got smaller and smaller until it went out. From the corner of my eye I saw Boo's long fluffy tail go around the corner into the kitchen. I got up to investigate and found nothing. The apartment was still. I went around turning on lights to examine every little place, including all of Boo's favorites. I honestly didn't expect to find anything, but felt I had to look anyway. Later that night I went to bed with no further incident. The next morning around 9:30 A.M. I received the sad news. Dr. Wallace relayed the details, assured me that we'd all done the very best we could have given the situation. We agreed upon a private cremation so I would have her ashes returned to me.

It is said that the mind plays tricks under times of severe stress, and because of my psychological training I do believe that happens in some circumstances. I don't think that was the case that night; I think my faithful, loving companion  let me know she was crossing the Veil and came back for a last goodbye. It was not a sad parting, but bittersweet. Death, after all, is a part of Life. Two years earlier my kitty loved me back from a near death experience; if it weren't for her fierce devotion and constant love, I would have given up and withered away. I believe this was the reason she came to me, and that when her mission was over, her short life ended and she returned to the place we all come from. I do not believe in the theology that states that animals have no souls. I believe exactly the opposite, that animals are completely integrated beings and have sentience accordingly. I believe they are much more evolved than humans in regard to spiritual beings. I think that's why they have limited lifespans- because they have less to work out than humans in their spiritual growth. They come into the world knowing much more than we do, and leave when they have taught us the lessons we need.

That was certainly the case with Boo, who shared everything with me : the joys of the first buds on the trees just outside our favorite window, of the sound of birds and rain and feeling gentle breezes that lightly caressed us. The pleasure of sharing her favorite snack of a bit of tuna when I opened a can to make a sandwich, and all those messy drinks of water I cleaned up. The unexpected leaps into my arms and wanting to be held, which were not so much demands for attention on her part as her wanting to love me. I will miss all of that and will continue to in the coming days.

In the meantime, as the Wheel turns, the Veil is thinning and Samhain approaches. I am currently planning my annual ancestor altar and ritual. There will be a new photo added to the collection of loved ones and those who have touched my life. It appears at the top of this story. Good Journey, Beloved Friend...wait for me.