At The Border Of Summer's End 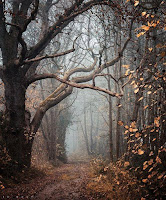 Summer has been a season of loss. Friends have lost husbands, wives, fathers and mothers, companion animals, and time has marched on.

Despite this, the Veil has been slow to open this year. Friends have noticed the same. What is amiss? Usually I am sensitive to the subtle thrumming as the space between this world and the next thins; this year there has been nothing. Not a single sign of the impending opening that the changing seasons herald. It's hard to miss, and I don't think I have.

Which means...it's waiting, suspended in the corner of the room like a spider, quietly waiting for the right moment. And I shudder a little.

What can be the cause? Are the crazed apocalyptic prophets finally right? I very much doubt it, although I do wonder if there is something of cataclysmic proportions about to take place. I have an inkling, and I hope I am wrong.

Divining the future by a variety of tools and methods have brought no solid answer.And so I return to watching the seasons change.

As I write this it is still Autumn,in fact, it's the day after Thanksgiving. We've had high winds the last couple of days, so the most stubborned of dried leaves have come down, and the ground is covered with a crunchy carpet of detritus.My favorite place to walk under these conditions (any conditions,really) is the local grave yard.

We have a huge graveyard ( 11.5 acres) just on the edge of town; it is a gift from the coal company that mined this area in a bygone era, primarily to bury the unfortunate victims of several mine disasters. It is a unique place due to burial arrangement; most 19th century burying ground were laid out in sections exclusive to ethnicity and social status, but not here. The Irish silently spend eternity next to those of Russian ancestry; Greek Orthodox share space with Southern Baptist, Roman Catholics and those holding no religious belief. The sole mausoleum, presumably belonging to a wealthy family, sits squarely in an area of Hungarian and Polish immigrants. There are more townspeople occupying the cemetery than registered voters. It's a humbling thing to ponder: do we the living rule this quiet little town, or do the beloved dead? So far the cemetery population outnumbers townspeople three to one.

Although it has now fallen to steady decay, this graveyard was built with the intention of many 19th century cemeteries, that is, as a place to while away the hours in a planned park-like place. Most of the winding paths are paved, there are marble steps leading up and down the hills, a boat pond, and a small outdoor chapel. There used to be picnic tables and benches, and all that's left of the chapel are foundation markers; the grass is rather tall in spots, and the woods have encroached upon some sections. Intentional plantings of yucca have spread beyond their beds, and quite a few of the older headstones have broken, some crumbling to dust.

It is the perfect place to walk on a cloudy day in late Autumn: it feels right and not morbid. It feels right to shuffle along the paths covered with dead leaves, crows and songbirds vocalizing along with the whistling wind. It is good and old and comforting. It is a place between the worlds, mysterious and wild and yet serene.

I love walking in these sacred places so much that I always include a local cemetery in my travel plans. You learn a lot about a place by how they keep their burying grounds and honor their dead. And I'm please to know that my weird little hobby has gained in popularity in the last few years. so there is now an international  tribe of us plodding through the resting places of the ancestors [https://www.yahoo.com/lifestyle/why-always-visit-cemeteries-while-143101095.html] .


Yule and Christmas loom large before us as these few solemn days of Autumn dwindle down to a treasured few. I entered the Place of Deep In-Dwelling several weeks ago; hunkering down with a cup of hot tea and good book, surrounded by candles and quiet music. It's a respite from the norm, and a chance to recharge before the Winter festivities burst forth clothed in glitz and glitter.  As much as I do love the gaiety of the seasonal celebrations. I am thankful for these few quiet days spent remembering those who have left this earthly plane for a new home across the Veil, to recall the sound of voices stilled until we meet again.

Posted by AmethJera at 7:07 PM