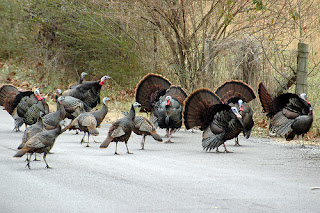 A flock of turkeys...Benjamin Franklin called them majestic and lobbied hard to have the wild turkey recognized as our national symbol rather than the bald eagle. All due respect to the distinguished former Ambassador to France and Statesman, signer of the Declaration of Independence, et al, I'm glad his suggestion died a-borning. Can you imagine the eternal humiliation of enduring various versions of turkey jokes that little fax pas would have heaped upon us as a nation? One has to wonder if the copious amounts of alcohol Franklin ingested during his tenure as the  Numero Uno American Party Guy in France and his raucously crude sense of humor were factors in this genius idea. The thought of a turkey in bas relief on every coin struck in American mints would be enough to send me screaming over the border into Canada...Can you imagine the 'Silver Turkey' instead of the 'Silver Eagle' dollar? Doesn't have the same elegant sound to it, does it?

Have you ever seen a turkey in the wild? I didn't see one until I was well past my 50th birthday on a trip up Mount Mitchell,  in the early days of my new North Carolina residency, but I knew what it was immediately.

About two feet tall, scrawny  and dull brown, it little resembled the image of the Tom Turkey with full tail and colorful plumage picture on the front of Hallmark cards. I suppose the fact it had been raining all day and it's feathers were soaked until they drooped didn't help...neither did the huge scaly  feet and claws. On the Ugly Bird Scale of 1 to 10( ten being a vulture) it was a 9.5 .It appeared from the brush beside the road and did the most amazing thing...the damn thing flew off. I been told all my life that turkeys couldn't fly, and this one took off running, flapped it wings a couple of times, and got enough altitude to escape over a fence.


Turkeys have nothing to recommend for themselves in the beauty department ( except to another turkey), but they can't be beat for taste and versatility. Roasted turkey with the trimmings is just about the best meal there is, hands down, and that's probably why we save having one only two or three times a year.That. or the amount of leftovers...we should be grateful our ancestors didn't have bison at the first thanksgiving or we'd be eating the leftovers from Thanksgiving until Spring...

My favorite part of the whole thing is a piece of brown, crispy skin and a heaping helping of stuffing from inside the bird. Some of the newer culinary advice I've read is to not stuff the bird because it cooks unevenly, or that the bacteria from inside the bird collects in the stuffing-I've never had either of that happen, and personally, I'm filing that information away the same place I put the folder on the herd effect of not getting a flu shot and tattoo ink can be sucked out of your skin by an MRI. My grandfather used to make and stuff the holiday turkey (and throughout the year chickens and rolled beef roasts) decades before I was born, and I've never experienced a bird with raw spots in it or heard of someone getting food poisoning because they stuffed their bird, and I would imagine if it happens at all they are isolated incidents...at any rate, I'm still stuffing my turkey for Thanksgiving.

Pop was a chief trained in the Army at the Cooks and Bakers School at Fort Dix. He was a fabulous cook and the only criticism was that because he was trained in the Army to cook, he always cooked like he was feeding one. When I was 12 years old he taught me how to make pumpkin pie, and we ended up with 11 of them because he couldn't reduce the recipe he had in his head down any father than to quarter it. He taught me to make the filling by sight and consistency, and the resulting pies I've produced over the years have been nothing short of miraculous if I do say so myself and I've never had a pie fail unless I've burned it.

The best part of Thanksgiving in the food department for me was the stuffing, and Pop had one of the best recipes I've ever tired...a loaf of stale white bread,moistened with a bit of milk and a couple of raw eggs, sage, salt, fresh ground pepper,and rosemary; chopped parsley, celery, onion, grated carrot and garlic sauted in butter and everything mixed together. He would vary it by adding sauted mushrooms,sauted spinach or smoked oysters, or chestnuts- and sometimes put all three types in the bird separated by an aluminum foil barrier between them. The secret ingredient in all the varieties was chopped fried bacon and a bit of bacon grease. He would stuff the bird,tie it shut and add more stuffing under the neck skin and fold it under, then loosen the breast skin and coat the meat underneath with solid butter he'd kneaded  in his hand until soft. More butter was spread over the bird ( again, using his clean hand), and then thick strips of 'seasoning bacon were laid across the breast and legs and wrapped around the ends of the drumsticks to keep them from drying out. It basted the bird nicely into a desirable golden brown, and the crispy bacon would crumble and end up in the bottom of the pan as part of the drippings used for gravy. The bird was set in a roaster and basted with the juices that dripped down throughout the roasting time and the result was a glorious gift of love. ( I will add that after removing it to a cutting board, he would flip the bird over to rest on it's breast and cover it with a large steel bowl or foil for 10-15 minutes so the internal juices would follow the gravitational flow to the breast meat, which was always moist, then flip it back over and unload the stuffing into a bowl. He never cooled the stuffing in bird, and that's probably why we experienced  the fabled bacteria problem.( **Leaving stuffing to cool in the bird, or worse-storing it in the bird- is just asking for trouble.**) Stuffing in my house exists under the two-day rule, but frankly it never has lasted until Saturday! Next day stuffing  was pan fried as a crispy patty, sort of like a potato pancake and smothered in gravy open-faced sandwich style.

I have made dressing ( inside the bird it's stuffing, on the side it's dressing) and it isn't the same.It becomes something less, a side dish. Even the addition of turkey or chicken stock has left it wanting; I believe it's the slow cooking inside the bird that makes the difference, or maybe it's the continuation of family tradition.
Posted by AmethJera at 8:47 PM

Email ThisBlogThis!Share to TwitterShare to FacebookShare to Pinterest
Labels: Thanksgiving