It Takes A Village To Make A Change 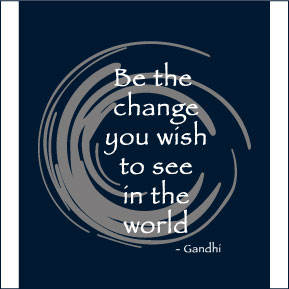 As the member of a congregation of a well known ‘liberal religious tradition’ which espouses principles including “The inherent right and dignity of all persons”, I am frustrated by our version of ‘social justice’ in which we claim “...The right of conscience and the use of the democratic process within our congregations and in society at large.” So often we are enmeshed in political discussion and debate in my Fellowship that I want to shout, “Hey, is anybody actually out in the world DOING anything?”

It seems we love to talk. We take part in demonstrations and visit our elected leaders with petitions, but few are taking tangible action. We gnash our teeth and wail about the poor, but our response to hunger in the community is collecting food ( picked up by others) for the local food bank, and a small team of individuals who serve a single meal at the women’s shelter once every 4-6 weeks. Meanwhile, other churches are actively on the street every day distributing sandwiches to homeless in the Downtown area, or volunteering in day shelters, clinics or sorting clothing for the poor. Meanwhile we are discussing the moral implications of homelessness in a study group.

We are very active in social justice when it comes to attending rallies having to do detainees in Guantanamo or illegal immigrants, or the death penalty-all valid, and I my opinion, all sanitarily at a safe distance from actually going into the trenches and getting our hands dirty. We don’t mind getting our check books out. Undeniably, money does help, but it can’t buy the amount and quality of manpower needed to minister locally to those in our community. We seem to favor the popular cause of the day, instead of working to irradiate those closest to home. Again, safe and sanitary.

I am even more frustrated with the Pagan community, who at times fanatically pride themselves in pointing out the many faults and failures of organized religion. While we are bellowing about the perceived evils of mainstream religious organizations  (and Christianity in particular), we forget to look in the mirror at ourselves. I’m certain that as individuals we far outpace other religious groups, but as a community we are certainly lacking. The only time during the year Pagans are a social presence is during the local Pagan Pride Day or festival. If we can gather to work as a community then, why can’t we be a presence at other times? The general public will never know what we do to make a difference in our world if we hid our light under the proverbial bush.

Hillary Clinton is famously quoted as saying, ‘It takes a village to raise a child.” In that spirit, I say, “It takes a village to make a change.” While it is morally admirable that we are able to make a difference one person at a time, doing it that way is pretty slow going-especially when there are so many issues we are facing that need immediate attention. The problems linger because there is a dire lack of committed individuals bound together working on a cause in unison.
Posted by AmethJera at 3:59 PM