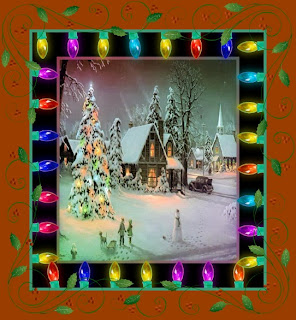 This afternoon I bought an artificial Christmas tree at Family Dollar. It was on sale because the box was torn but all the parts were in it, so for $3, it went home. I was already resigned to the pot of bare branches like I had last year, which-if the truth be known- wasn't so bad looking after I they were trimmed with all the garland, tinsel and ornaments. In fact, you could hardly see any of the bare branches, and where they peeked through, it gave the whole thing character in a Charlie-Brown-Xmas-Tree kinda way...right up until the branches dried out and began to break off bit by bit and the oasis they were shoved into split in two and half the 'tree' fell on the floor before New Year's Eve.

There won't be that problem this year, because I have a 4 ft. genuine Noble Fir artificial tree, which the instructions packed with it assured me was made of real PVC ( Oh, goody!) The Noble Fir-named no doubt for it's fine heroic bearing and NOT because it is representative of any strain of fir tree named after anyone with the moniker Noble- is presently sitting on a card table wedged in the corner of my make-shift bedroom while it awaits trimming. I hastily cut a tree skirt from a yard of Xmas fabric covered in toy soldiers and holly on a cream-colored background and tucked it around the foot of Noble Fir to cover up its scrawny green  PVC legs, then got the stationary paper box full of Christmas ornaments off the top shelf of the closet where  they've rested since this time last year.


The box of ornaments is a wondrous assortment of things I've acquired from friends and my own habit of collecting through the years. Most of us have at least a few fragile ornaments from our childhood- mine are a couple of pine cone clowns made in China in the 1950's, two hard white plastic reindeer that I inherited after Aunt Laura Pote died in 1985, and a handful of peeling glass gee-gaws from my grandparents. The reindeer are always placed first on any tree of mine since I rescued them from the garbage when Aunt Laura's son was cleaning out the house after she died-she always placed them first on her own tree, and this sacred act was obviously lost on her only child who had tossed them into the trash can around the back of the house. They aren't particularly pretty, but they hold a lot of good memories for me of the next-door neighbor who was my adopted 'aunt' for 18 years.

Then there are the things I have made over the years from various phases of crafts- painted ceramics, counted cross-stitch,plastic canvas, bead kits, pain-by-number wood, assorted glued glitter items. They are joined by various Muppets, the Peanuts Gang, a 4 inch fully dressed Beefeater doll from England, cats, mice, cotton and feather birds and an assortment of stuff from friends-Jeff's grandmother's blue and white beaded Star of David and  bell; Gretchen and Mark's clothes pin bird's nests, Kay's hand-crocheted Xmas stockings and the Kermit the Frog in a Santa Hat JD stowed out of sight in his luggage and brought back from London for me when he filmed John Denver and the Muppets: A Christmas Together. My step-sister Elizabeth found a porcelain and cloth Scrooge doll in the Christmas Room at Ronnie's Garden World in Smyrna, DE ( Which I miss, by the way, because they had the best selection of  decorations anywhere.) There are a dozen or so formerly white plastic glitter- dipped snowflakes that just make the tree, in my opinion, even though they have now aged to a yellow patina.


Presently, it's all laying in a jumble under the tree sitting on the table awaiting the big moment-as soon as I find the fluffy white and silver garland and a few strings of white lights I've shoved inadvertently in another box...meaning I will have to search through all of them tomorrow until I find said missing items. I will not be able to trim the tree without them, it's in violation of the 'The Rules'-I bet you know which ones, because you have them at your house, too. You know, the Rules that dictate what goes on the tree in which order to a specific Christmas CD, or which ornaments are traditionally placed on the tree by whom, or that the lights must be on while the garland and ornaments are being added. Things that we don't even think about but do out of habit because they are such ingrained traditions.( And isn't that yet another wonder of Christmas?)


Meanwhile, as I position each ornament in its proper place and adjust it to hang just so, all the Christmastimes I have ever lived through will come flooding back in my memory in the blink of an eye,and I will be living them again...as I happily sing along in each of the Muppet's voices that I learned while working on the above mentioned Christmas special...abet, slightly off key.

Take that, Charles Dickens...even YOU can't create Christmas Past like a tiny ball of spun cotton atop a pine cone from China with spindly pipe cleaner arms and legs can!

Posted by AmethJera at 1:59 AM