Foxfire is the name commonly given to various species of  fungi capable of  spontaneous luminescence growing  on decaying wood in old forests and some swamps. These fungi are known to produce a phosphorescent dim green glow that can be seen in dark places on moonless nights. Other names it is known by are faerie fire and will o' the wisp. There is a scientific theory that the organic material stores light and energy-including UV rays- and are caused to glow through a chemical process combined with decomposition. Yes, it's nature magick, because even though the elements are known the process still is not fully understood and is difficult to satisfactorily explain. 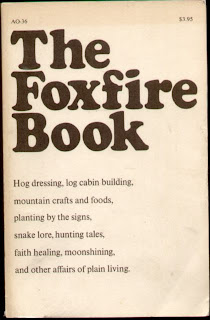 Have any of you read the Foxfire Books? Foxfire was an oral history project created by Eliott Wigginton and his Rabun Gap Georgia High School class in 1966. It was a co-operative venture which had never been undertaken. The assignment was to interview the elderly residents of their nearby Appalachian community about 'the good old days'. Their intention was to document life of a bye-gone era in the mountains: there were stories about everything from making soap and apple butter to hog slaughtering, ghost stories and faith healing.  The series of books (there are over a dozen of them now)were gleaned from articles which originated in a magazine edited and published by the students.The teaching methods used by Wigginton and the magazine became so popular that when back issues were no longer available, the students began putting together the anthologies that were eventually turned into books. Foxfire featured stories about mountain folk (what those in other parts of the country, especially city dwellers would snicker at and refer to as hillbilly life). The mountain folk in Foxfire were locavores before of the term was put into general usage and before the practice became trendy. They were self-sufficient out of necessity and their pride was dignified. They managed to carve a life our of the harsh mountains in virtually unchanged from the way of their Scot-Irish and English ancestors who settled all across the Appalachian Mountains throughout several states.

That was 45 years ago. Foxfire Magazine and the Foxfire Fund still exist as a historical archive and teacher-training organization.(http://www.foxfire.org/) In 1987, the Hallmark Hall of Fame adapted a Broadway play written by Susan Cooper and the distinguished actor Hume Cronyn into a made for TV movie of the same name. The story centers around Aunt Annie Nations (played by Cronyn's real life wife, Jessica Tandy, who won both a Tony and and Emmy for her character) who must decide if she's going to abandon her generations- old family homestead in the mountains to real estate development- a very real situation which was faced by the locals interviewed by the Foxfire students and exacerbated the decline of their numbers. She has kept the memory of her dead husband Hector (played by Cronyn) alive as a spectral thought form with whom she has conversations and arguments about the decisions she faces. Her children have all moved off the mountain and established their own lives scattered about the country, but her youngest son Dillard (played by Keith Carradine on Broadway, and John Denver in the movie) comes home for a visit bringing his own problems just as his mother is considering the fate of the family legacy.(http://youtu.be/MMUpcVaTCBs)

So what does a series of books about old folks in the back woods of Appalachia  have to do with being a Pagan? Plenty! In the pages of Foxfire you will find not only fabulous history of the Celtic people in America, but a wealth of folklore from some of the best native storytellers in the country. The books all feature first person accounts of growing herbs and using them, aromatherapy, and time-honored home remedies from the people to whom they were passed through the generations-many of them root workers and cunning men and women...and there are examples of hoo doo and folk magick explained by the actual practitioners in narrative form. Reading through any of the Foxfire books gives you the feeling of being taught these things in person. If that's not enough, there are the stories of faith (healers who take up serpents and handle fire)  and the paranormal ( haints, hauntings and ghosts). It is through Foxfire that I learned to make paper and bind my own BOS and identify herbs, grasses and trees. The series  are an encyclopedia of folkways that should, in my opinion, be on the bookshelves of everyone of us next to those of Caitlin and John Matthews, Scott Cunningham and  Ray Malbrough. The only fault I can find with the series is that you have to hunt for specific information because the categories are loosely defined...but it's worth it, because they are a living connection to heritage.

In addition the Foxfire Foundation offers an excellent approach to training teachers:"...teachers will identify their existing perceptions of the relationships between teachers, learners, and the curriculum. Those perceptions will be challenged, and the teachers will begin to redefine their own teaching philosophies to include the Core Practices and merge them back into their own teaching practices".http://www.foxfire.org/teaching.html The curriculum blends well with the usual 'year and a day' training of various traditions because much of it includes not only the above mentioned subjects but nature study and environmentalism. The approach echoes that of some of our best Pagan elders in tone and material covered. Subjects covered in on site living history workshops at their museum include making buckets from berry bark, candle making and constructing your own broom making from local materials. (http://www.foxfire.org/news.html)

I think all of us who follow a Celtic-inspired path wish there was more information on this pantheon. Ancient Celtic history was an oral tradition, much of it  lost to the ages. It is said that history is written by the victors; if that is true, then I feel we can discount much of the story of the ancient Celts. Foxfire provides us with a verifiable history of Celtic folkways from the Diaspora to the present.  You may not think that's much...but I'm willing to take it.