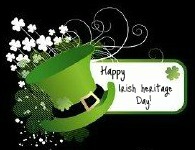 This week my kitchen smelled like what I imagine my Irish ancestor's homes smelled like-corned beef and cabbage, colcannon, baked root vegetables, oatcakes, soda bread and good strong tea. Incidentally, the  traditional corned beef is a gift from the Jewish butchers in New York City  to the Irish who settled in during the Great Diaspora.The usual rasher of smoked bacon available on nearly every Irish farm was far too expensive in urban New York City. Corned beef, however, was an inferior cut of meat-the grain runs every which way and it takes hours of boiling to make it palatable- but it was plentiful- and it was cheap. Years ago I felt obligated to my Hibernian roots to learn how to cook corned beef  and cabbage 'the right way', that is, as traditionally as I could and as well as I could. In the ensuing years ' the right way' has come to be defined as the way I most enjoy it, and this is how it should be for everyone.

Every year when St. Patrick's day rolls around I cringe a bit. I despise the way the Irish are portrayed in American society. The truth of who we are has been covered over by green beer, plastic shamrocks and " Kiss Me, I'm Irish" tee shirts. Sorry, but I don't want to be kissed by a stranger just because I'm Irish, and don't even get me started about green beer because I will beat you senseless with the nearest shaleighle. When it comes to the marketing of St. Patrick's Day ( and what should rightfully be called Irish Heritage Day ), I have a keen lack of humor. Not because I am a teetotaler, and it's not even that the story of the 'Saint of the Irish' is so embroidered in religious superstition and sentimentalism that the truth is lost, or that the 'wee folk' are so feckin' cute that it hurts (leprechauns being a type of trooping Fae-not known to be particularly friendly to humans, and not particularly cuddly) or anything else of the 'tis Irish, so naturally it's supposed to charm your pants off ' variety...It's the whole mythology that the  Irish people are a bunch of happy drunks. Despite the reality that the local pub is the seat of socialization in most small villages, not everyone who goes there drinks until it's time to stagger home singing Danny Boy with his/her best buddy. No doubt the working class in those places trudge off to the local tavern to hoist a few, but they also go to have a bite to eat and to spend time together. They go for the craic- (not what you're thinking!)... a Gaelic word which describes a feeling as much as a thing, craic is what happens when  the common folk get together to have fun, listen to music, catch up on local news and socialize. 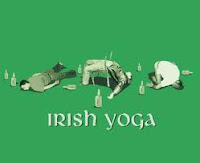 Alcohol is often involved in Irish celebrations for the same reason it's employed everywhere else in the world where people want to kick back and relax, but it's not the sole reason to get together. The branding of the Irish as a bunch of helpless, hopeless drunken oafs is unfair and untrue. Marketing St. Patrick's Day- the only official day we Irish get on the calendar to celebrate our heritage-as a day of unbridled debauchery and portraying the Irish as a  bunch of sodden goofs barely unable to lift their heads off the bar is just plain wrong. It is as wrong and stupidly arrogant as stereotyping all Native Americans as Tonto, or all African Americans as watermelon eating Uncle Toms or all Italians as Mafioso. That stereotyping continues because we put up with it.

I take personal offense to this stereotype because I know who my Irish ancestors were, I know what their lives were like and they went through before they left their homeland in third class steerage for the trip across the Atlantic. They didn't want to leave Ireland- but they didn't want to starve to death, either. I know how they were treated when they arrived at Ellis Island, and how they carved out a meager living  as charwomen and day laborers. Family memorabilia from that era includes some immigration documents and a pulp paper sign from a shop window that reads, " NO NIGGERS and NO IRISH need apply". Badly faded photos from the first generation show long dead relatives in overalls, and starched maid uniforms; successive generations picture a police officer on the street, a firefighter with his team of horses, a short stocky woman with a wisp of red hair peeking out from under the cap of a graduate nurse from the New York Hospital  and a no nonsense teacher with her class in an urban schoolhouse. They did well, these people. You can see the sharpness and determination, the fire and pride of accomplishment in their eyes...the same steel blue eyes that look back at me from the bathroom mirror. I know who they are because I'm one of them...and they did not idle their lives away in a drunken stupor. We allow their dignity to be taken because we put up with it.

I have vivid memories of riding the bus to class in Manhattan one St.Patrick's Day morning before the big parade and overhearing a conversation between the bus driver and patron. The driver was saying how he hated navigating the downtown streets on St. Patrick's Day because of all the drunks, " Worse than New Year's" he said. His friend was nodding in agreement, " Yeah, damn drunken bastard Irish" he said, then, taking notice of me and my waist-length red hair, " Oh, sorry, Miss."  On the way home I stopped off at the drug store and bought a box of sable brown hair dye; I successfully snuffed my red tresses for the next three years. I even began wearing heavy foundation make-up to hide my freckles- but the steel blue blue eyes of my father's Irish ancestors continued to stare back from the mirror, and I could see the pain of their denial. I denied them because I was ashamed, and I was ashamed because I felt I wasn't good enough.


So my love/hate relationship with St. Patrick's Day continues...I'm proud to be Irish and glad we've been given our own a day  on the calendar to celebrate our heritage. I take issue with St. Patrick being selected to represent us when he wasn't even Irish ( He was, In fact, a Roman patrician, the son of a nobleman). Sts.Brigit and Columba- who are Irish-are nearly forgotten. It makes me sad that those who came by the thousands to escape poverty and hunger are honored not for their perseverance and determination, nor their contribution to building this country, but for their legendary drunkenness.