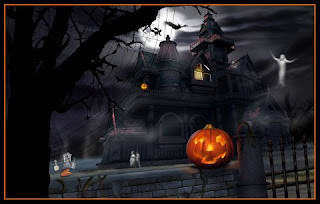 In deep Autumn, when the leaves go from burning with glorious flaming colors to withered embers scattered on the ground, when any wind makes the bare branches clatter like dry bones, and there is a crispness in the air that portends what Winter may bring, there is the last hullabaloo of  Halloween.

I love the idea of an old fashioned Hallowe'en- when the name of the day was spelled with the contraction to note that it was the evening before All Hallows-when you set the jack o' lantern  out just before dusk to guide costumed children to the door for a treat-and to welcome visiting ancestors from across the Veil with a friendly smile.  I would take the jack o' lantern to the front yard and try out several spots before I found just the right location...because I knew if the light could be seen unobstructed they would come back. Even when I was a young child I understood the deeper meaning of that long, long night. I understood that there was a portal that opened to the Other World, and that the dead stirred and returned to walk among the living....and I eagerly waited. Like Linus, I believed in the magick that beheld the Mystery. I believed in the Great Pumpkin.

My concept changed throughout the years, of course. It became more geared toward the ancestors and the somberness of Samhain. For a while the Halloween decorations were geared exclusively toward witches, ghosts and jack o' lanterns- the paper monsters were kept in the box with the over-flow of unused decorations. Anything pertaining to Autumn pretty much happened outside and was limited to whatever Nature provided...such were the years I was developing my Halloween sensibilities.

While my friends collect Christmas decorations, I collect Halloween. I would kill to still have the pulp paper hanging decorations I had as a kid-there are only a couple left in the collection. Over the years, most Christmas ornaments were  developed to be used year after year, while ephemera  pertaining to other holidays. Sturdy decorations were made of metal, fiberglass, plastic or a combination, while those for Halloween were mostly paper and intended for disposal after the holiday had passed.

What all this has to do with me developing my Pagan identity is that Halloween opened the door to the otherworld- it was a contrived other world, but a departure from "real" life into the realm of fantasy- which, as all of the fathers of psychology knew, is the inner life- and the genuine reality of the persona.

Halloween allowed me to delve into my interest of the unknown, and particularly of Death. It allowed me as a young child to be attracted to ghosts and monsters, to look closely, and to explore taboo.

Since Halloween is one of my favorite subjects and I write about it often, I think you may enjoy continuing this discussion in a previous Broom with A View post: