Knot What You're Thinking

We are up to week 24 of the Pagan Blog Project, and it's getting more and more difficult to select subjects following the alphabet. A few fellow bloggers are stymied and suffering the dreaded writer's block...it's more difficult to chose subjects for some letters than others. I'll admit that I've gotten behind-not because I've had writer's block, but because other things have been blocking me...sometimes Life simply happens and our schedules are disrupted...so here I am, trying to get back on track and post when expected...onward. 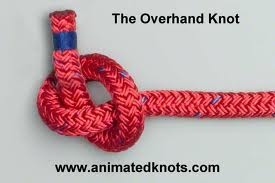 K is for knot...an " interlacement of one or more flexible bodies" according to Merriam Webster's Dictionary..."a joining or binding" says others. One of the most useful skills I learned in Scouts was knot tying. It was necessary to know how to tie knots to  successfully pitch a tent in the days before rip-stop nylon and shock cords, when a tent was actually made of canvas and guy lines were necessary to suspend the structure. It was literally a badge of honor if you possessed the ability to tie more than a half dozen knots at camp. And then there was macrame, which is a series of specialty knots applied as a type of hand- weaving...everyone in my generation knows how to make one of those utilitarian plant hangers that was so popular in the 70s. There are entire websites dedicated to tying fishing lures, which incorporate elements such as beads and feathers into the final product.

I will admit that my knot tying skills have degraded over the last few years of urban living. I discovered just how inept out of practice I'd become when I attempted to re-attach the clothesline to a tree and failed to properly fasten the rope with a proper clove hitch. I suppose nailing the clothesline tot tree would show a lack of ecological savvy and woodsman-ship, so I didn't resort to that drastic a measure. It's to the point where if I can't make do with an overhand knot, then I resort to other methods...like duct tape.

Superstition places great store in the magickal power of knots. Folk magick uses the power of binding luck to a person by tying a knot in an article of clothing being worn ( much easier to do when petticoats, skirts and long tailed shirts were the fashion). Tying a knot in a handkerchief was an easy way to remember something- and to hex and bind.Other schools of thought believe it unlucky to allow a knot to remain tied in some circumstances-such as twisted and knotted bedclothes. One old belief in particular is that a dying soul cannot be freed from the body if the sheets and blankets are wrapped too tightly or knotted.

Happily I can report that most knot magick (or cord magick)will require nothing more involved in the way of supplies than an overhand knot and a short length of string. Knot magick is simple and done with little effort other than focusing your intention to bind the power of a thunderstorm ( particularly good when your working needs an energy boost later ) or bind love during a handfasting. Knot tying is one of those methods that are multipurpose and can be used in so many way as an effective tool. I usually include a period of meditation on my desired out come and use a chant to seal the work when I bind in the energy or release it. There is a more involved method for using knots and cords here:http://www.herbalmusings.com/cord-magic.htm Personally, I use utility cord ( the kind used to tie packages) because it is inexpensive and readily available. It is usually white or cream colored, which means it covers pretty much everything, but occasionally I have combined it with a bit of colored embroidery floss for a visual effect. They are tied firmly to keep the energy, but not so tightly they cannot be released by hand.

I have several very nice witch's ladders made of simple cord. One incorporates beads and a few silver charms, but the others have been made with simple overhand knots from thin cotton cord. They resemble a rosary or necklace and can be worn around the neck, wrist or ankle. They have been tied during the full moon, dark moon, wind and thunderstorms. I have one which was made during a hurricane and another during a particularly energetic rock concert....and they all work well for their intended outcome.

For practice, I would suggest tying a string of not more than three knots  on the same length at a time when you are feeling particularly powerful or confident, and saving that particular talisman for a time when you need a little something extra in your working.

Posted by AmethJera at 8:39 PM