All my life's a circle;
Sunrise and sundown;
The Moon rolls thru the nighttime;
Till the daybreak comes around.

All my life's a circle;
But I can't tell you why;
The Season's spinning round again;
The years keep rollin' by.

It seems like I've been here before;
I can't remember when;
But I got this funny feeling;
That I'll be back once again.
There's no straight lines make up my life;
And all my roads have bends;
There's no clear-cut beginnings;
And so far no dead-ends.
~ "Circle" by Harry Chapin 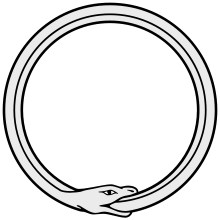 The concept of the circle permeates our lives. We gather in circles, dance in them, circle around the campfire, grieve when the circle is broken. We wear them in necklaces, bracelets, anklets, rings and belts. Our calendar is ordered in a 12 month cycle, we live through the cycle of the moon and the seasons. History is want to repeat itself time and again, just as we repeat our mistakes.We always seem to come back to whatever it is we were doing after a brief hiatus, and we focus our attention on things in the center of something. We are People of the Circle.

If you have been involved in the occult for any length of time, then you are familiar with the Oraborus, the snake that eats it's own tail. In alchemy, Oraborus is a sigil- a seal, a pictorial representation of either an abstract or semi-abstract of a thought expression or form. Many sigils in Hebrew-oriented magickal systems represent angels and demons. In this case, Oraborus represents the unending circle, the infamous, that which continually recreates itself. Oraborus represents that which begins again as soon as it comes to an end. The definitions of it are as vastly unending as that which the image represents.

Swiss psychologist Carl Jung believed that a sign stood for something known,contrasting it with a symbol, which stood for something unknown or unclearly defined. He perceived Oraborus as an archetypal mandala: no beginning and no end, continually recreating itself. Jung likened it to the individuation process, the continual cycle of becoming and wholeness. In this way the Oraborus also represents synergy: the creating of the whole. The true meaning of the Oraborus lies in man's unconsciousness and acceptance of 'the shadow self "...(as) he slays himself and brings himself to life, fertilizes himself and gives birth to himself. He symbolizes the One, who proceeds from the clash of opposites, and he therefore constitutes the secret of the prima materia..." ( Prime matter of Creation)
[Carl Jung, Collected Works, Vol. 14 para. 513]

The Oraborus dates back through antiquity, with the first representation believed to be found in a funeral text found in the tomb of Tutankhamen. In the second century Chrysopoeia of Cleopatra, it appears with a light and dark half reminiscent of the Taoist Yin/Yang symbol. It was also described by the Greek philosopher Plato [Plato, Timaeus, 33], with a bit more organic description of it than that of Jung. It has reoccurred in Norse and Celtic mythologies (among others, as obviously stated) Gnostic Christianity claims it as a symbol of the eternal.The Aztec serpent god Quetzalcoatl has been portrayed as biting his own tail on Toltec ruins. The list of examples goes on and on.

Oraborus has also been represented as a dragon biting it's own tail, most notably in Asian and Celtic art. (The word dragon derives from the Greek verb 'drakein', " To see clearly".) Many Asian cultures hold the dragon in spiritual significance as the primal force of Nature. In the Celtic countries, and Ireland and Wales in particular, they are associated with wisdom. These cultures imbue them with a form of magick all their own, and associate them with life-giving waters- rivers, streams, lakes, and sacred wells. Therefore a dragon biting it's own tail would bespeak of the knowledge of the whole of Life, or the cycles of Life.

Posted by AmethJera at 3:03 PM