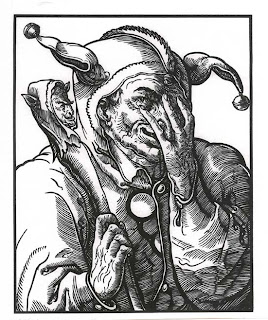 Yesterday, while I was blissfully window shopping at the mall, someone caught a glimpse of my pentagram and "just had to introduce" himself as a fellow Pagan. Before I could blink, he had locked in on me and gravitated into my personal space. I don't mind chance meetings brought about by recognition of the religious symbol hanging from my necklace; in fact, I've had some rather pleasant exchanges with people over the years. I've also had some, er...interesting ones. I could tell this was going to be one of the latter rather than the former.

" My name is Zoltan Equinus, and I'm a High Priest in Persephone's Mound..I'm also a 32nd degree Mason, a Reiki Master, and an ordained minister in the Order of Malki Tzedek. My partner Blatforth and I build our own stringed instruments and have recorded a CD of  music played on the balalaika. We'll be playing at a kirtan dedicated to Gwalchmei with full shanti on Saturday night. Maybe you'd like to come?"

This was all unloaded in an enthusiastic rush before I could exchange any sort of pleasantry...or even my name. I know my face was frozen in that 'smile-because-this-person-could-be-dangerous' expression; I could see myself reflected in Zoltan Equinus' black pupils. Admittedly, I was a little unhinged  because the last time I saw an individual with pupils blown out like that was when Burgess Meredith played an alien life form masquerading as a kindly old priest in an airport restroom- right before he ripped another patron to shreds and ate them.

Okay, maybe it was actually because my new acquaintance was a little too eager to share his Pagan credentials with a stranger. TMI, dude. A simple " hello" would have been much more conducive as a conversation opener than the implied, " You need to know I'm more accomplished than you are... right now." I might have been less momentarily fixated on the word DERANGED emblazoned across his T-shirt,too.

Otherwise he seemed to be a nice enough chap, except that even after exchanging a civil introduction and mundane pleasantries (which included commenting on my Peter Stone Celtic knot pentagram), he once again elaborated on his 'credentials' before departing. I would have liked Zoltan Equinus a bit more had he not felt he needed to impress me with his peerage...which he failed to do. Our meeting would have been much nicer if we'd simply introduced ourselves, or even if we'd exchanged knowing nods as we passed
***********************************************************************************
"Send me your haunted items" the listing began on a popular online auction site " I will examine and remove any negative energy from items you send and return them to you. My goal is documentation only as I am pursuing my second criminal justice degree. Donations appreciated."

There was a minimal flat charge for shipping and handling...and no other information. I would think twice about sending off anything that even might be a prized possession to a complete stranger. No name, no address...just an eBay seller listing, by an anonymous individual. The minimal shipping and handling charge would have basically covered transport of most items one way only. It doesn't take a rocket scientist to make assumptions about this one, folks.  One more thought: the alleged student was not working on a degree in metaphysics, mind you....Criminal Justice. No real mention of this being a paranormal research project. I'll leave it at that and you can formulate your own thoughts about legitimacy.

Wow...what a great offer! A used folk magick item that's more than likely just teaming with all sorts of interesting energies from who knows exactly where! The last sentence would send any experienced occult practitioner off to find his/her stash of holy water and a box of matches. Talk about opening yourself up for trouble? I'm not running a retirement home for lower entities and demons, are you?

************************************************************************************
Lest you think all of the above examples I've given are the product of my over-taxed imagination, let me assure you they are all quite real. Unfortunately. I have only changed a few of the details in each situation for the sake of  propriety and litigation...but there are thousands more just as outrageous out there in our Pagan/Occultist/Magickal Communities, and even a novice could see through most of them. Or, at least I'd like to think so...but I'd be wrong. The reason these things still exist in our realm of experience is because some of us still actively and unknowingly engage in them...P.T. Barnum was right about a sucker being born every minute, because he knew the breath of human guile and gullibility.

Many of us stumble away from what we felt was a religious experience of untruths and falsehood into the welcoming and waiting arms of charlatans, frauds and fools who have found a niche preying on the spiritually malleable. People tend to want to believe things which are the direct opposition of what their previous situation was, believing the pendulum will swing will make things okay. Sadly, we too have those situations and circumstances but which turn out to be  equally as much lies...such as individuals with lots of credentials which turn tout to be too good to be true, or persons who "only want to help" the innocent by helping themselves to whatever they can, to intimate offers of tools or other services which are not only harmful, but potentially dangerous. Will you be fooled? I hope not.