Jack's Eyes: A Story of Samhain 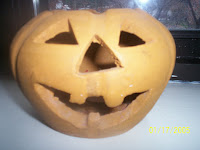 "Old" Samhain, or the time when the Sun enters 15 degrees of Scorpio - the true cross quarter - is November 7th. It's an opportunity to celebrate the lives of those who have crossed the veil on a quieter day.

If you've been reading this blog for any length of time, you know that I have a favorite terra cotta Jack-O-Lantern that sits on my desk throughout the dark nights of the year.[http://amethjera.blogspot.com/2012/08/jack-o-lantern.html]
I light the candle in Jack at night when I do my devotions ( usually from Caitlin Matthew's wonderful book Celtic Devotional) Since I have a rather curious feline sharing my living space now, Jack's candle is one of those battery operated types, which I personally find less satisfactory aesthetically, but I don't want a singed furbaby, either. It's a compromise I'm willing to make for the safety of us both.

During the late hours of Hallowe'en night I 'lit' Jack's candle and decided to leave it on to 'burn' as long as the battery lasted. Then I made my ritual of memory to my ancestors and beloved dead. The candle shining through Jack's serene face continues now for seven nights, when it should have quit a few days ago. I'm not claiming any sort of miracle. No Pagan gods or Jack Skellington have appeared on my toast. But I do believe that someone is  reaching through the Veil, someone is still about, watching over us, or being present, because that light is still shining.

The light is growing dimmer, but it is still definitely flickering. It has been doing so from those late hours of All Hallows, through All Saints' and All Souls' Days, through the designated period of Dia de Muertos and the rest of the week right up to today, which is astrological Samhain. Life is full of things we don't understand and aren't meant to. Mystery simply is.

Today's energy is that of the day which exactly stands between the Autumn Equinox and Winter Solstice-a time outside of time. For me, it is the beginning of the Deep Indwelling, when the world begins to slow and rest, vegetation dies back, animals lay their store for the cold months. Early Autumn has been warmed by the Nature's bursting forth with the colors of fire; late Autumn mutes to soothing earthiness and quiet. Soon the ground will harden beneath frost and the air will be tinged with a crisp chill. Nature-on the surface- will lie fallow and dormant. Deep down the process of renewal and regeneration will begin, hidden from our eyes until the first spark of Brigit's flame.

Jack's eyes are growing dim, and the Veil is closing for another year. Our Beloved Dead, who are always available when we need them, are slowly returning to the Sacred Isle of Avalon.