Magick Of The First Harvest 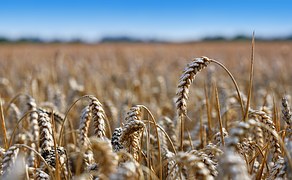 Here we are at Lughnasadh, the First Harvest, also known as the Grain Harvest. Unless you live in an area like the US mid-west, where barley, wheat, oats and corn are grown-I suspect like me you take these foods for granted when you pass by them at the grocery store. Not only are they nutritional powerhouses packed with dietary fiber and vitamins, they are magickal  powerhouses as well. Some of the most well-known festivals were dedicated to the grain goddesses Ceres and Demeter.

Barley is a member of the grass family and one of the first grains cultivated in the world. It is grown in temperate climates globally and is one of the most popular grains fermented in the process of making distilled alcohol. It is also particularly good as a cooked breakfast cereal, or cooked and combined with fruits for a side dish. Barley flour is popular in Scotland; it's lighter in weight than wheat flour ( but darker in color, which is why most barley-based malts used in ale are dark).It is also used to make a roasted cafe drink similar to coffee, and for animal feed. The magickal correspondences of barley include protection: sprinkle barley in your windowsills to keep evil and negativity out. It can also be used as a perimeter barrier as a substitution for salt. Barley water is the base for several tried and true protection washes for both the individual and home. Libations made from distilled barley are and appropriate offering to the Norse god Frey, and to most Sun gods.

Wheat is ground and used not only for flour, but as a cereal as well. It is full of fiber and popularly consumed as bread-heavy, dense wheat bread is wonderful hot from the oven! It is used magically for protection and prosperity and is a conduit for psychic energy and all spiritual needs. Add ground wheat ( or coarse flour) to spirit bags to call up the energy of the Earth.

Corn has a long history not only as a food, but as a spiritual tool. Cornmeal, sprinkled on the heal of an individual, is used to open the Third Eye and as a dedication to the Corn Maiden of The First Nations. As masa, it can be used to thicken soups and stews, and to bless the food at the same time. A few kernels of corn can be carried in your pocket to curb negativity, or to raise your own personal vibration ( the difference is in the intention). Corn is also used in healing ceremonies. It is a plant sacred to most Native Peoples. Sprinkle cornmeal or add it to mojo bags for prosperity.

All grains are linked to prosperity and fertility (sexual and otherwise). when you use food as magick, always cook with the intention clearly in mind throughout the preparation. Imbue the food with your own personal energy as you cook it, and it will be that much more powerful toward reaching your goal. Remember to stir clockwise to 'build up' the positive and counter-clockwise to decrease or banish.

Bread, cakes and cookies are all particularly popular in pagan culture at the First Harvest. You might like to try the following recipe. I use them as ritual cakes, but they're a good, quick snack for a hike, too.