The Wonder of Water 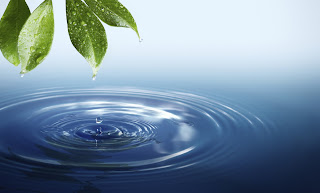 Plain water- the stuff that comes out of your tap at home,  falls from the sky, or is found in the ocean is a great conductor of energy because of the variety of minerals it contains.  Salt, calcium and magnesium ( to name a few), all of which are found in tap water, rain water and sea water, are electrolytes, which form ions that form a movement of charge. These 'impurities' are what allow an electrical charge to flow through water.
Which is why it's wise to stay away from water sources such as sinks, tubs and water pipes indoors, and bodies of water outside during electrical storms. ( Incidentally, distilled water - pure water that forms from steam- contains none of the above and  contains no ions, which cause it to react as an insulator rather than a conductor.)

Spells of magic  and energy work call for the use of natural spring water because of its ability to attract and hold energy. ( If you use bottled water, check the label to see how it's been processed at the source.  Drinking water that has been purified by reverse osmosis often has electrolytes added to improve its flavor, so it can be used for these purposes. Other RO water and distilled water cannot. When we add salt to water during ritual, we are re-creating this science besides purifying the element.

It has been scientifically proven that being near water has untold physical and mental benefits to our health: the negative ions found in water, fresh running water in particular, refreshes body and mind.  Water molecules contain oxygen ions and are most abundant near waterfalls, oceans, rivers and streams. There is also a surprising amount present in your everyday shower and bath.Who doesn't love a long soak in the tub or an invigorating shower? Drinking a simple glass of water refreshes not only the body, but the mind. Since the human body contains a large amount of water, around 60%, the additional ionic charge is an energetic boost. But that's not all...

Common water is an amazing conductor of psychic energy as well. Have you noticed feeling more connected to the spiritual ether when you are around a water source? That's because you are: water is a natural amplifier to the Otherworld. In the normal world, sound travels as pressure waves through the air, and since the temperature just above a body of water (or a wall of water, such as running water in a shower or a rain storm) is cooler than that higher up or father away, and the speed at which sound travels is lower, which affects how noise manifests. The difference in speed causes the sound waves to change shape and amplify. ( On the other hand, dry air is not a good conductor of sound.) Parapsychologists believe this is why spirit communication is sometimes improved when we are around water.

Since moisture has the ability to affect the vibration of sound, water is a naturally occurring channel for those who have crossed over and wish to communicate. My friend Randy, who leads a paranormal group, has stated that EVPs received near a water source during investigations ( including during and just after rain storms) are more frequent, clearer and more intelligible. Both my friend Laurel and I have heard our mutual friend Arthur's voice while in the shower. While that experience was a little freaky at first, it makes perfect sense now because of the sound/water connection. I often hear my friend/guide John when I'm running water at the kitchen sink. Beyond the science of ions, I also believe that the 'white noise' caused by the shower or running faucet creates the same sort of sonic conduit in the way that radio static is used by paranormal investigators. Maybe it's simply a trick of the brain, but whatever it is, it seems to work. Maybe it's just another part of the Great Mystery. Whatever it is, I'll take it.

Posted by AmethJera at 2:31 AM