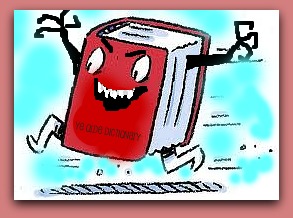 I had a dream last night: I was being chased by a dusty old dictionary...you've seen it- the one that sits on the bookshelf collecting mold until someone needs  to whip it out to  bludgeon someone else with it to make their point. It has big teeth and looks scary sitting there, the strings of it's tattered cover moving ever so subtly as you walk by, biding it's time...waiting. It's root words are written in exotic languages like Greek and...Latin. Beware the dreaded Latin! It comes to impress you to death with it's scientific names and terms like sic, and you shall bow down to whatever man yields it's power....or not.

Human beings developed language as a communication tool. They wrote the definitions and decided which words went into their dictionaries. Occasionally, they thumb through their marvels of wordiness and decide to remove a word or two and change the definitions of some because the words no longer fit in the modern world or the definition changes through the common lexicon.

Dictionaries are not sacred text. No God has commanded," Thou shall not change one jot or titter of Merriam-Webster."  When we retire them, defunct dictionaries find themselves keeping company with old dog-eared copies of National Geographic at the used bookstore.

The content of dictionaries change because Life changes. What was good in the past may not quite fit in the future, and so perhaps re-definition is in order. We form new words out of old ones all the time as we recreate our lives...so let's move on.
***********
Until this past Tuesday, I had no idea who Christian Day was-my apologies, sir. I first saw his name mentioned in connection with a post by my Craft sister Sabrina the Ink Witch on her Facebook page. There was a smoldering controversy over what Mr.Day chooses to call himself in the Pagan community. It generated a great deal of  discussion because, evidently, it is now up to the larger community not only to determine how you identify your personal path, but what you choose to call yourself. It seems to be everybody's business but yours.


I expressed an objection to the contrary, and was suddenly cast as a 'minion' of someone I had just met by those self-appointed in the community to do so, which I find amusing. I find it amusing because I quickly saw that the whole thing is nothing more than high drama from the royal court: it's another witch war. It's Salem politics, old jealousies and someone with entirely too much time on their hands.Oh, yeah...they called me a 'fluffy bunny', too...Which for those of you not familiar with the term, it's a subtle insult which is the Pagan version of 'nominal Christian' (*shrug*).

Christian Day would like to reclaim and rehabilitate the word warlock, which he has a perfect right to do, despite objections to the contrary. Put away your Olde English Dictionaries, folks, because in the larger scheme of things, it doesn't matter if Christian Day calls himself a warlock, a hemlock or a canal lock. It's up to him, and not to you. End of discussion.

Oh, by the way, Little Bunny Foo Foo has a message for you witchier-than-thou "non-fluffy bunnies"... 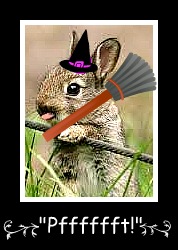