O Phil, Where For Art Thou.. 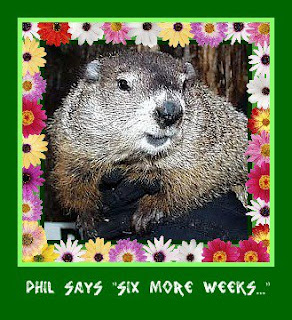 That scion of seasonal divination, Puxatawney Phil, has decreed that we will have an early Spring...in six weeks.

Our American Ground Hog Day is a variation of a ritual brought to this country by the Germans who settled in Pennsylvania, Maryland, Ohio, and North Carolina, and are known collectively as  Pennsilfaanisch Deitsch, or 'Pennsylvania Dutch'( 'Deutsch' being an archaic English reference, not meaning the Dutch people of Holland) . Descendants of the 17th and 18th century immigrants are popularly associated with the Old Order Amish or Mennonites, but in actuality, only about a fifth of those settling in the verdant valleys of Pennsylvania were members of either religious sect.

With the Pennsylvania Dutch came their folk magick and superstitions, rendered most popularly in the painting of Hex Signs ( Hexen translates to 'Witch)on the sides and roofs of their barns to ward away malifica and faeries, in Pow Wow tradition witchcraft. Pow Wow, despite it's more familiar association with Native American culture, is a blended form of Christian and German shamanistic  folk magic, centering on healing and invocations and featured in John Holman's 1820's classic text  The Long-Lost Friend.  An endearing ritual practice in the Northern European countries where their ancestor's hailed was to watch for a groundhog leaving it's burrow during the mid-winter: no shadow meant an early Spring, seeing his shadow meant six weeks of continuing Winter.Some countries used other animals-bears, for instance. It was a time of returning light,warmth, and hope

The fact is, it's six weeks until the Vernal Equinox either way, and the official start of Spring. 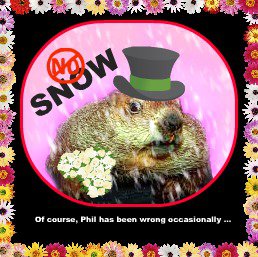 Puxatawney Phil is by far the most famous of the weather prestidigitators; there are other who are pretenders to his throne, but they don't have the PR Phil has and have remained unknown. Puxatawney Phil is not only a tourist attraction, but a cottage industry as well. The members of the Puxatawney Groundhog Club are  Phil's guardians, and he is kept in style throughout the year, in his own very nice digs maintained by them. They have a website at www.groundhog.org , where you can find souvenirs, get travel plans and an idea of what there is to do in the town of Gobbler's Knob, PA where the most famous groundhog in the world lives.You can even send an ecard to your friends with his likeness and a verse on it. The locally owned Gardner Candy Company even has a chocolate version of Phil available for around $3.00 if you can't wait for the Easter Bunny. Every February 2nd the members of the PGC dress in formal top hat and tails,wax their mustaches, and  host a huge community breakfast... and then, in front of 40,000 fans and  local television crews, haul a kicking and squirming Phil out of his temperature controlled tree stump 'house' and hold him aloft to check for his shadow. It's a momentous occasion in the town of Gobbler's Knob, as one can imagine. I used to watch this live on Channel 6, the local ABC affiliate when I was a kid, and just like the Mummer's Parade, it is a Philadelphia area tradition, one I lost when I moved South and one I miss. 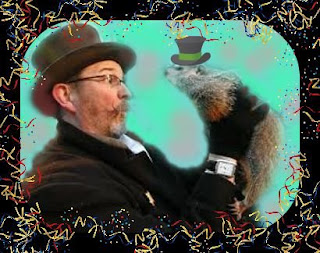 Posted by AmethJera at 2:39 PM