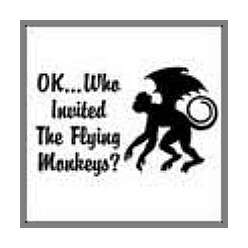 It's seems like every time I turn on the computer now there is some religious entity attacking another...nothing new, right? They've been doing it for thousands of years, and that's one little battle that will never end.  What I am seeing, and frankly it disturbs me, is that more and more there are people bullying others to get behind their cause...by manipulative challenging or flat out bullying. Why? Do they so desperately need to be right that they feel they need to take away the happiness of another by this behavior? I'd be more inclined not to sign on the dotted line if that's type of  method being employed, because not only does it not pass the usual smell for me, it reeks from afar. There are too many flying monkeys for comfort in this one, folks...from all directions.

I get emails and commentary on my FB page daily from these pot stirrers who feel as thought they need to punch holes in the paradigm, crusaders who are out jousting  at windmills-any windmill- like so many drunken Don Quixotes as they ride from flame war to flame war. I'm not off to ride in everyone's battle, although I truly appreciate when someone brings a new cause I might be interested in to my attention; I can't read everything. My reading and writing time are limited because I have a hundred million other things going on -just like you. There really is a life beyond social networks and media websites and fighting the good fight. There is all the mundane stuff like laundry, house cleaning, running errands and, oh yeah....being gainfully employed... which takes up a lot more of our personal lives than it should, in my humble opinion, because you work to live and not the other way around. I've tried it and it sucks.

I imagine I'm no different than any of you in that I respond to things which interest me-videos, articles, a variety of little tidbits of varying degrees of importance. I may write a letter to the editor or post a comment on Facebook or to About.com or on someone else's blog about a subject that has caught my attention for the moment...then I am done with it. To me, it's the modern day equivalent of what my parent's generation would call 'Cocktail Chatter'. It's meant to be relevant to me only for the moment. There are issues  I am continuously involved in- because I choose to be and have an emotional involvement in them- like the fight for equality for GLBT persons, women rights, the horrible massacre of innocents by charlatan witch hunters in Africa, environmental issues,continuation of public funding for the arts, and good will in the interfaith community.There are many others, all which demand energy from my single source, and there are times when I have to step back and re-charge before soldiering on. Although the Universal Source is endless, my personal well is not.The stuff in my personal life (health and general welfare) eats up an incredible amount of current right now because-like many of you- I am struggling day by day to figure out where the next dollar or meatloaf is coming from.

This blog, guest blogs,magazine articles and time on Facebook and Twitter also demand energy from that source; and I struggle to keep things at the integrity level you, my readers, expect from my writing...because if I allowed things to just run free and I put my initial thoughts about certain things on paper without running them through my discernment filters, I could fall into the trap of  re-acting instead of acting on things...and I expect better from myself-for both you and me. Especially in the arena of all things Pagan, where the emotion about things connected to everything surrounding that subject  runs high and it's really too easy to have a knee-jerk reaction to the outrageous things that go on...much if which, I have to say, we as a community feed until the chimera consumes us.

Right now there is a lot of high drama going on  about a particular individual who is allegedly plagiarizing materials and supposedly teaching things under the cloak of Wicca that don't set right with a few, and now groups have formed and sides have been chosen; certain individuals have been defamed-including a couple famous authors- and the flaming witch war is at full throttle. Make no mistake, folks, that is exactly what it is- a witch war-no matter how it's being presented by either side. Step back and watch for several minutes to gain a bit of clarity, and you'll see particular all-too-familiar characteristics begin to emerge from the smoke. There is a lot of name calling, including the ever popular and hilarious "Fuffy Bunny"...the Pagan equivalent of  the insulting " Nominal Christian"...and there is a lot of drama. Too damn much drama, all of which seems to be fueled in threads by a particular crusader to is keeping the pot stirred. The real problem I find with this is that the individual in question seems to charge the moment in the hope that everyone will respond with the appropriate outrage, then sits back in satisfaction to watch the parade. In transactional analysis, psychiatrist Eric Byrne has labeled this type of situation, " Let's You and Him Fight ". The central theme is that two individuals are pitted against one another by a third with the intention of the instigator gleefully watching the conflict. The more high drama between A and B the better and more egotistically satisfying for C, who caused the whole thing but is not actually an active participant and contributes nothing other than the spoon with which to stir the  pot.

Like I said, too much drama. While I in no way approve of plagiarism-and this blog has plagiarized, hence the cute little copyright tags I'm posting all over the place-I think that after the initial public identification of the alleged plagiarized material  should be reported to the proper authorities. If there is a legitimate copyright infringement, report it. Otherwise I believe that it's pointless to keep tossing this situation into the the public arena like so much entertainment in a Roman Coliseum. The situation should be recognized then given over to the proper channels and then laid to rest( at least temporarily) so the powers that be have time to properly attend to it. Other than continuing to point out that the material is rightfully someone else's creation and supporting that particular individual, it's not anyone else's fight. Truly. It's between the initial two parties involved and nobody else needs to jump on the bandwagon and form a parade. (If and when the 'injured' party requests support, then I would proceed with caution because nothing is as it appears on the surface, especially when humans and emotions are involved.) 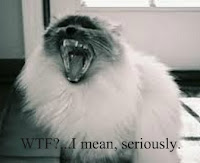 There is a great deal of ballyhoo currently on Facebook about someone in our community allegedly pretending to be someone else and giving bum advise to newbies. While I personally find this reprehensible, I also wonder why it's so necessary to a certain few to encourage those outside the loop on this particular individual to don their armor, when there are hundreds ( if not more) of these charlatans throughout our community. It's what's been going on as long as I've been Pagan, and will continue to do so in some form or another because that is the nature of the human psyche, like it or not.  Now that particular grievance has morphed and expanded into another form of monster which has nothing to do with the original subject and is attacking those who are not involved at all, like Raymond Buckland and Judika Illes...which I find preposterous.  For the life of me I can't figure how those two could possibly be a target of these loose canons, but they are. There are days I wish I owned a magickal bazooka so I could just blast the annoying bastards off the face of the Earth. It's an entertaining thought, but I don't have one because the gods have not seen fit to gift me with one...and I trust their judgment implicitly.

Personally, I have enough to do to encourage my local part of the community to stay true to themselves and act in an authentic way, all while helping toss out the bad apples without going into someone else's yard. The emotion surrounding this situation has reached hysterical levels through unfair manipulation and down right bullying by those few pot stirrers. I am not joining the fray and will restate my position: It's just so much drama and too much for me right now. I choose my battles carefully...and I will not be bullied to do otherwise.

Afterword: I've gotten a couple of comments asking about the names and locations of the groups I wrote about in this post. I'm not about to add to their little freak show by mentioning them by name. If you're really that interested, then go to Facebook and look for them yourself. I'm not giving directions and encouraging rubberneckers, sorry.
Posted by AmethJera at 2:58 PM