Tuesday afternoon Gaea stretched her arms and groaned. The earth shuddered along much of the  East Coast of the United States from the tectonic plates shifting miles deep beneath the surface, the point of impact being identified by the National Geological Service as near a small town in rural Virginia.Here's all the techno-stuff if you're interested:(http://en.wikipedia.org/wiki/Plate_tectonics). To be truthful, I'm only mildly interested in the scientific end of it-and not interested at all in the conspiracy theory/religious wing-nut stuff flying around.

What I do know is that at about ten minutes of two on Tuesday afternoon, I was alone and working on Lois' Cottage (see previous post), and the house was blessedly quiet. The sun was shining in my bedroom window and I was thinking about dropping the shade to cut the heat from the sunlight, and I noticed the stillness. The leaves had stopped moving, there was no breeze. The birds-which had been happily, noisily chattering-went silent. There was a vacuum moment in time which I didn't pay really close attention to, and then then it sounded like someone was upstairs walking around, then stomping, then jumping up and down. The house gave three slow-motion waves....and I realized we were having an earth quake...in central North Carolina. Earthquake on the Piedmont.  The shaking went on for nearly 10 seconds before I got up and stood in the doorway, like all the disaster training films I used to prepare thousands of volunteers when I was Coordinator of Disaster Operations for the Red Cross years ago. I remember being in an Earthquake in Delaware in the early 1970's, and it was terrifying and violent. The house-and everything else-vibrated back and forth in a rapid blur and there was a loud booming rumble. Plaster fell out of a patch in the ceiling in my bedroom. I've also been in minor quakes while working in LA, which caught me off guard but weren't frightening; everyone just stopped what they were doing, shrugged and went back to work when it was over. 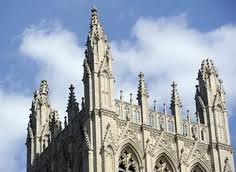 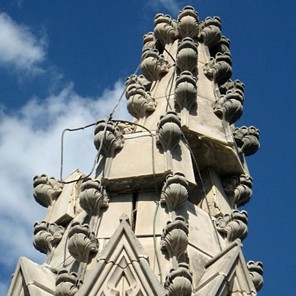 What did impress me was that the epicenter of the quake was over 200 miles away from us, yet it felt like it was right beneath the house. What impressed me more was that it did damage in Washington, DC. Almost immediately the doom and gloom crowd started posting the stats on Facebook and the Internet: The National Cathedral was going to fall down because the main bell tower was leaning, the Washington Monument was twisted and would immanently collapse, the White House was in ruins...you know the drill. The maudlin media services love a good misery story, and with all the focus the Dominionists have put on destroying national symbols as of late, they were having a field day.  I immediately emailed my friend Richard who's in charge of the PR department for the National Cathedral to ask about  damage. Realistically, I knew there would be some- the cathedral was built in the time honored fashion of stacking the huge stones to interlock rather than adding mortar. My great-grandfather and his sons were all expert stone masons who worked on the bridges and tunnels all over New York City so I understand the physics employed. Pop and I built a stone wall out of river rocks on an estate when I was a teenager. It was a long, involved process to find stones that would drop into place and fit together like they were glued...but it works. In the case of a building, the sheer weight of the stones keeps the place from falling down, but it creates immense pressure on the ground below. The ground settle never actually stops. Flying buttresses help redistribute some of the force, keeping the walls intact.  There is literally an army of stone masons employed at the National Cathedral because stones shift, come loose and fall out all the time. Within the hour, the news I got back was that a couple of statues had fallen over and  three of the fleur-de-lis finials had toppled off the pinnacles on the main tower. In the larger scheme of things, that's small change, folks. The tower was most certainly not leaning, but there were cracks throughout the building, and they considered the damage minor. Nothing like the media hysteria and rumors.

I have a  special fondness for the National Cathedral- whose proper name is The  Episcopal Cathedral Church of Saints Peter and Paul. The National Cathedral title came much later. Sts. Peter and Paul is an actual church with an very vibrant congregation engaged in the community. I used to drive down to Washington weekly for clerical meetings from my own home cathedral, and the building is like an old friend. I have been through work corridors and tunnels concealed by huge wooden panels that are not open to the public, and one of my favorite places in the entire building  is the the Chapel of  Joseph of Arimathea down in the basement at the crypt level. The ashes of Helen Keller and her teacher Anne Sullivan are interred there, among a host of other notables. The plaque at the Keller/Sullivan crypt is in braille. It is dark, cold and still, as one would imagine. It is at once awesome, thrilling and  terrifying to realize that the whole building-millions upon millions of tons of rock, sits just above the low, heavily vaulted ceiling...and you are squarely beneath all of it. It puts things into perspective.  The Space Window, the most unusual in the church, holds a chunk of moon rock in the middle top nimbus of the stained glass. I am also fond of the pulpit, carved from stone from the bell tower of Canterbury Cathedral- and the last pulpit Martin Luther King , Jr. preached from just a week before he was murdered. (This is a fantastic blog with photos of the National Cathedral  taken by a local tour guide:http://fairfacts.blogspot.com/2009/04/national-cathedral.html  If you're a history buff like I am, you'll love it!)

Back to the earthquake and the news it's generating. As soon as I could get online after the shaking stopped, I posted to friends on FB that I wondered how long it would be before the Dominionists started taking credit for the shake, rattle and roll events on the East Coast. Seems a ultra conservative Rabbi beat them to it with a pronouncement that the earthquake was God's displeasure at the passage of the gay marriage bill in New York- now there's one I didn't see coming. Then there were the " God was after Obama" set. Can anyone take them seriously? I mean really- if  Yahweh were that pissed at Obama, would you think He would be a better aim, you know, like bring the White House down on his head or knock Air Force One out of the sky with a lightening bolt, or just give Obama a massive MI and be done with it? Doubtful he'd mess up the whole Eastern seaboard. And as for the bunch of loonies who thought God was destroying national symbols, can I just point out that the worst damage in town was to a building with no steel infrastructure and a few cracks in the Washington monument? Columbia, the goddess of Freedom and Democracy, is still firmly attached and standing tall atop the Capitol , which is more than I can say for their cock-eyed theory. The prize goes to the conspiracy theorists who have managed to make numerological connection between Mineral City, CO, and Mineral, VA, both towns with mining histories, and the 'fact' ( and I don't know this for certain) that a major fault line lies midway between the two towns, and it was that fault that ruptured and caused the quakes.


Can we just take this for what it is? It was a natural occurrence. It happens, folks....Gaea occasionally groans.

Tuesday she heaved a sigh, and we were reminded who is really in charge of our world.