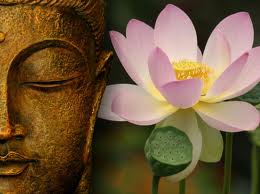 "Non-violence does not mean non-action. Non-violence means we act with love and compassion. The moment we stop acting, we undermine the principle of non-violence."

When I was exploring my personal spiritual path and wanted a more concrete base to work from, I explored many options. I nearly became a Buddhist. I simply love the Dali Lama, but Thich Nhat Hahn clinched it for me. A poor Buddhist monk, he helped to rebuild villages, schools and hospitals in his native Vietnam after the war. Later he moved to the US and taught at Princeton and Cornell Universities. He was a major influence for Martin Luther King, Jr. entering the arena of Social Justice, and later King nominated him for the Nobel Peace Prize. He currently lives in exile in France but continues to teach and write: he has written over 100 books, 40-50 in English.

I was thinking about Nhat Hauh this week when several fellow Pagans and I were discussing options of what to do-if anything- about the New Apostolic Reformation and specifically the up coming DC40 campaign. We all agree that there is a reason to be concerned, but we disagree on the fine points...as I would expect. It may just come down to a few of us 'doing a little something' on our own outside the group, but it's good to have others as a sounding board, especially when the reaction in the wider community swings from action to apathy on varied levels.


"Anything that contradicts experience and logic should be abandoned.
The ultimate authority must always rest with the individual's own reason and critical analysis."
~ The Dali Lama

Over and over during the last few days I've heard both the rattle of swords and the evoking of the Three Fold Law.  What I am advocating first and foremost are the words of the quote I've cited above by Thich Nhat Hauh, broken into three parts:

1.Non-violence does not mean non-action. This is where we get bogged down by endless discussion. By all means discern the situation. Meditate on it, pray about it, do whatever you normally do prior to when you consider something that requires taking action...but make a commitment, formulate a plan and get on with it.Do not become trapped in a circular discussion of the situation, because in-action is not only non-productive, it's a form of  passive-aggressive thought form. Lead, follow, or get out of the way.
2.Non-violence means we act with love and compassion. It's a situation where the old adage of  "Hate the sin and not the sinner" may be useful. The truth is we don't know another individual's mind, and I'd like to believe everyone is acting from a place of authenticity. These kinds of groups get big because they feed the fear of a lot of other-wise well meaning folks. They gather moss like a rolling stone because their leadership is articulate and slickly packaged  . They impress the hell out of  common folk like Betty and  Joe Bag O'Donuts, because the Cindy Jacobs of the world appears knowledgeable, informed and educated. She is well dressed and has the evangelical presence/ blessing of God which Betty and Joe lack. She speaks in the sacred tongues, which, truth be told not only impresses Betty and Joe with her Biblical prowlness, but likely scares the crap out of them, too. She is everything they are not- but aspire to be because they want to fit the image of good, upright Christian people. To some of us, that picture may be ridiculous and funny, but to just as many people in small town Bible Belt America that is the ultimate picture of an evangelical Christian elder, and you can't really fault them for wanting that if that's who they are. They want the approval of the flock and need it to feel they have arrived socially within the group and are pleasing to God.Understanding that mindset goes a long way in correctly demonizing the actions and not the people involved...and it's the action taking place that is evil. It's the message, not necessarily the messenger, that is skewed and negative.

3.The moment we stop acting, we undermine the principle of non-violence. Quite a few Pagans have voiced concern about violating the Three Fold Law if they take action to counter the actions of those engaging in prayer for the success of the DC40 movement. While I can appreciate those who wish to act with caution, I can honestly say that I believe that someone praying for  the over throw of common sense and the Constitution  is performing a malefic action. What the participants of DC40 are proposing is an attack on the  free will of the American People. They have chosen to throw down the gauntlet first, and in order to preserve our First Amendment rights, someone must have the guts to  pick it up. This is not a joke and they are very serious. They have already infiltrated the lawmakers in Georgia, where a woman can be sent to prison if she has an unexplained miscarriage. Medically speaking, that's about 75% of all miscarriages, the cause which is nature taking it's course- an unacceptable answer to Dominionists who see baby killers behind every bush and have attempted to strip women's health initiatives such as  Planned Parenthood of its funding. So a well-placed bit of shielding or a return to sender whammy is certainly in order, in my opinion. It will not harm the individual, but it will certainly disrupt their intention. You may have other ideas of your own on how to handle it.

Which leads me to the subject of political awareness. Personally, I hate politics. I hate everything about it- but I believe it's a necessary part of our society. We need to find out what our local politicians know about the Dominioinists and their opinion of them...and if we find a local politician who sympathizes with them, we need to work through mundane channels to let that individual know we are watching them and intend to get them out of office as soon as possible because of their views. We need to let our legislators know we are willing to hold them accountable for their actions..and do it. Do not underestimate the power of the constituency  (you), because it is the single thing that will make a politician cower in fear; none of them want to be former legislators, and they know that those who wield the vote have that ability. Likewise make sure where our local merchants stand...especially the large corporations. If necessary, place a phone call to their corporate headquarters or write a letter to the CEO. You don;t want them contributing funding to the NAR or their counterparts.

Not every Christian is supportive of the craziness of the NAR. In fact, I'll wager than not many of them are, but the NAR has their own form of spell casting, and believe me, they are very good at casting a glamoury or two out there when necessary. "Harm None" are wonderful words to live by- but they are a suggestion, a guideline, an ethical expression....but I cannot and will not sit idle and watch our country, our civil rights be stripped away. We have freedom of religion in this country which right now allows us to assemble peacefully  and perform a public ritual. If the NAR gets it's way, that freedom will be gone, and it will be illegal to so much as cast a circle in the privacy of your own home with the curtains drawn. Think about that for a moment. It's a long shot....but it's a possibility. And it will not only affect Pagans, it will effect the LBGT community, Buddhists, Jews, Muslims and other Christians as well as agnostics, atheists and others. Imagine being forced to pray and pay homage  to a 'god' who is created in the likeness of the DC40, a god who upholds hatred and elitist ideology for a self chosen people...is that any life at all?

The way to stop them is very simple: it would only take one single act of non-violence.
That would be to look them in the eye and firmly say:"No."

Posted by AmethJera at 4:38 AM