"The boundaries which divide Life from Death are at best shadowy and vague.
Who shall say where the one ends, and where the other begins?"~Poe 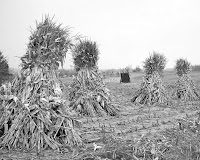 Earlier in the day, the hospice nurse and I positioned her to die. We pulled her up in the bed, tucked a pillow under her knees, and under each elbow with her forearms flexed at right angles. There was little to do other than to moisten her lips occasionally-and wait.She was in and out of consciousness all afternoon. I told her she could go to be with her husband, who had died in this same room ten years earlier. We continued to wait. I put R.Carlos Nakai's Canyon Trilogy on the CD player, and the house was instantly filled with the haunting sound of Native American cedar flute. It seemed to be the right thing to do to welcome Death. The music was beautiful and calming. The CD ended, and I left the room to start the music again. When I returned, she was gone. The last piece on that recording is called Homage To The Ancient Ones. I now realize  that during the final notes of the song, she had gone to join them.
My Grandmother died quietly, at home. We discussed the option of hospice after her last hospital stay, when I had to call 911three times  in one day to take her to the ER, and they kept sending her home because there was nothing more they could do for her. At the time there was nothing I could do for her at home, either. The doctors at the hospital were angry because I wouldn't send her to a nursing home: she was and old woman who was dying and taking precious time away from their job of life-saving. There was nothing exciting or dramatic about it, so they didn't have the time. So I said to hell with them and took her home to die. One of the home care nurses call me anonymously and suggested I tell the hospital we'd decided on palliative care. The nurse couldn't recommend it herself, she would have lost her job, I'd have to make the call myself-so I did. I have never regretted making the call.
At the turn of this century, the notion of allowing the terminally ill and elderly to die at home was just beginning to take a firm hold. People had just begun to speak of being caretakers for the dying. It was still an iffy thing to care four your loved one when you knew they weren't going to ever get well again.
We had become a society that banished our dying away from the familiarity and comfort of their normal surroundings because allowing them to die at home was distasteful. Better we should allow others to take care of what we find distressing or disagreeable in our clean, sterile world.

At the turn of the prior century, this would have not been an issue. Family members were expected to die at home, and they did, all the time. It may have been repugnant to care for the dying, but it was the norm. It seems to me we'd come full circle in 100 years.

The year before my Grandmother died, Starhawk, M. Macha Nightmare and friends from the Reclaiming Collective published a remarkable book on crossing over: The Pagan Book of Living and Dying. A compendium of prayers, chants, blessings, rituals and stories all relating to the process of dying and what to do in the time before and afterward, it should be a staple in the library of anyone who directly serves others in a pastoral care setting: High Priest/ess, clergy, healthcare professionals.
I believe this is an important book because we have not only lost touch with Death on a personal basis, but because we ourselves have forgotten how to die. As both a minister and a paramedic, I believe there is a time and black where heroic measures are appropriate, but as a human being who will someday face my own death, I say there is a time to get out of the way and let Death come. I will not pretend that this is a clear-cut issue because there are many factors  in the case of each individual death. But I do believe with all my heart that benevolence, compassion and common sense should win out when the end is near.

Our distaste, and much of our fear, comes not out of the unknown associated with Death, but our societal influences. Prior to World War I, you did not rush your dying Grandmother to the hospital, rather, you kept her at home where she was lovingly attended to by members of her family, friends, and the town doctor. People instinctively knew what to do. There was no panic, no emotional trauma, no hysterics. It was simply another part of life. Our world has changed: the population has exploded. We are no longer being born, living our lives, and then dying in the same community. We have surrendered that which makes us human to an antiseptic modern society where machines and strangers tend to our dying. We have forfeited the holiness of Life itself in order to not get our hands dirty.
It is an irrefutable truth that we all die. In this season where we honor our dead, it is time to consider our own end. It does not have to be left to fate. Discussing death in a realistic way with your loved ones will  bring it back into its rightful place as a part of Living.

Posted by AmethJera at 3:06 AM