The Halloween decorations at my house live in an over-sized plastic tub most of the year. Usually by Mabon ( Autumn Equinox ) they're brought out of their hibernation, dusted off, and placed carefully around the room.  I love their bright colors-even the ones with a lot of black on them seem bright. When I was living up North, my Grandmother and I would visit a farmers market that had a huge gift shop full of Fall decorations. The Halloween things were mostly reproductions of primitives you would have found early in the last century-pumpkin and vegetable-headed dolls, hand-woven scarecrows, punched tin lanterns, corn dollies, tin cut outs, garlands of dried flowers. They were displayed all over the shop on antique furniture, with just the right amount of dustiness. Visiting the W Farm Mart (several times) was the highlight of the season for me.

I haven't found anything here in the south to replace that experience, but I'm certain there are places that exist that are similar- I just haven't stumbled upon them yet. Meanwhile, the mega craft stores-Joann's, Micheal's and AC Moore will have to do. Pier 1 isn't so bad, and World Market had some pretty neat pseudo-primitive stuff. Mostly I got to look instead of buy, just to be among the decorations and soak in the vibe. 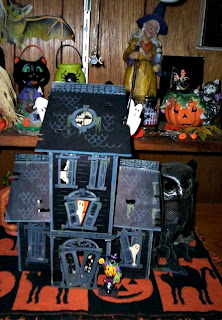 When I was a kid, paper decorations were all the rage. Halloween took a back seat to Christmas, and most of the autumn holiday decorations were disposable. Thank goodness for collectors who have preserved these artistic treasures. Some of the decorations of my childhood have survived, meticulously packed away each year like the crown jewels. One I particularly love is a fold-out haunted house centerpiece made of thin printed
cardboard. There are a few strategically placed cut-outs in it to allow for lighting. It used to have a little fence which was slotted to the front but is long gone. Mom brought it home from a stationary store when I was in the second grade, and I remember it was $ 2.00-expensive then for any decoration. That was nearly 50 years ago, and I marvel at the condition it's in, that a half century has gone by. Here it's pictured with a few of it's contemporaries- the paper bat at the upper left was part of a fold-out garland, and the tin owl lantern which holds a tea light.

Here's another oldie. This rakish feline fellow is one of a series made by the Bestie Company in the 1960's. I have six of these cats, all in different poses. Some of them have a gate-fold leg to allow them to stand. I have one other that predates this series which stands and is only black, white and orange and was purchased by my grandfather. The 15 cent price tag from the 'variety' store is still affixed to the back.

At one point in my life I was an art teacher, and also making ceramics. I had purchased some molds and made clay slip to pour into them. My kiln kept blowing out all the circuits in the house, so I took my bisque ware to a friend's ceramic shop to fire it, and spent many wonderful hours talking over coffee and learning about glazes. This  witch (left) is from that period and is painted with acrylics and wired so the jack-o-lantern lights.

I collect whatever catches my eye, and I do have discriminating tastes. My major rule is nothing outright gory. Contrary to popular belief, it is not the time for a gore fest. Even though Death is a central part of the holiday, I believe that if it's accepted as a natural part of the life cycle, then there is nothing fearful or frightening about it. Halloween is a day out of time, originating as the ancient Celtic New Year- the end of Summer's harvest, a fallow time during the dark months. The fear factor originated in the holiday because it was the beginning of that fallow time, when it was unknown if there would be enough food and warmth to sustain the living, and there was a certainty that someone or something would surely die during the cold winter. Therefore, dying was at the forefront of people's minds, and as humans are wont to do, Death and Mystery were personified along with all the accompanying fears of the day. Those who were misshapen and disabled ( most likely by birth defects caused by lack of proper nutrition, disease and inbreeding) were demonized and became monsters; the elderly cunning folk who were the herbalists and healers became witches and enemies of the Church; fantastic tales born of a fear of death and the unknown spawned tales of ghosts, spirits, demons; anamorphic creatures such as werewolves and vampires, and the Fae. 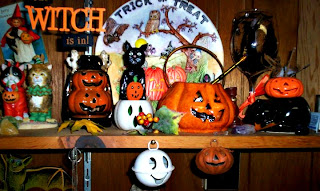 When I owned my own home, I used to set up a yard display which grew from a few paper bats and crepe paper ' moss' hanging from the huge maple in the front yard to graves which included headstones made from Styrofoam packing material and discarded plywood: a bit of sod was removed, the earth beneath disturbed, and the shovel and an old railroad lantern left to create a bit of atmosphere. An inflatable skeleton was tied to micro-filament thread so it would appear to 'run' across the yard, and there were scarecrows, jack-o-lanterns and ghosts made from gauze and old clear dry cleaning bags. I took me the better half of the day to dress the yard. Half way through the process the bus from the middle school would go roaring by, and the kids would have their faces mashed against the windows in wide-eyed wonder at what they know would come. By 5 p.m., when the sun was just setting, the jack-o-lanterns were lit and imagination would become magic. It's amazing what a streetlight and some carefully placed props can do!

Posted by AmethJera at 2:57 PM