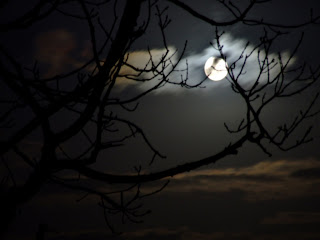 Mine is at times a rather sedate life. I like it that way. On any given Thursday evening you can find me hanging out at an outside table at the Whole Foods sipping over-priced fair trade coffee, reading the local alternative newspaper and people watching.

Believe it or not, this is one of the times I am truly in my element. Being single-and pretty much intending to stay that way- I have learned to entertain myself and enjoy my own company. Not that I don't enjoy the company of others.( I'm not that introverted.) Let's just say that you're not going to find me becoming frantic because I find myself with nothing scheduled on a Friday night. There is an entire library of esoteric books to choose from to read, some sort of craft to do ( a la Lois' Cottage) while listening to my extensive CD collection ( current seasonal favorite: Mannheim Steamroller's Halloween, a compilation of delightfully whacked arrangements of macabre classics), any number of social networks where I can delude myself into thinking the 307  people on my friends list really are, blogging or writing magazine articles...and just plain sleeping. Yes, sleeping. It has become one of my favorite things to do in the last few years since I've developed such a fierce case of nighttime insomnia.

Sitting at my favorite metal table in the sidewalk cafe wannabe at Whole Foods I have suddenly found myself next to a dwindling pile of brilliant orange pumpkins. They are artfully arranged and dutifully restocked by a guy named Louie. Louie is probably in his mid-fifties; he has long, stringy, graying hair that he wears stuffed up haphazardly under his official Whole Foods cap. Most appropriately, he has a scarecrow look about him-his layers of clothing hang on a bone thin frame. He wears a perpetual scowl, but is actually very friendly when spoken to- and he is earnestly engaged with his dwindling pile of locavore pumpkins. " A couple more gone." he says to me tonight as I sit cupping my hands around the recycled paper cup holding 12 ounces of freshly brewed coffee from the rain forests of South America, " A few more to go."  Louie is a pumpkin philosopher, and I secretly wonder to myself if he has named his charges, since he seems to notice which ones are missing from the pile. He talks about them as if they are up for adoption rather than for sale. Momentarily I imagine him as Charlie Brown's friend Linus, all grown up, but still tending his serene pumpkin patch at Whole Foods.

On this particular evening as I munch veggie chips and sip politically correct coffee, there is a sharp chill in the air: October has suddenly turned cold in this part of the South. The leaves respond by turning into a riot of color and dropping to the ground. It has been raining this week, and the cold air is also moist; the kind of Autumnal mix that permeates your clothing and skin and makes you shiver-frost on the pumpkin weather. There aren't as many people outside in the seating area tonight, so I can pick up lines of conversation easily as I go back and forth between reading this week's Independent and glancing up to observe those around me. The crowd is usually a mixture of college kids, thirty-somethings stopping off for a quick bite to eat on the way home, assorted esoteric-hippie-dippy types, seniors sharing fellowship over a fresh bakery item, and some wan, hollow-cheeked, pasty looking guy touting the virtues of being vegan. I suspect the latter of actually being an under-cover zombie scouting hopefully for a mother-lode of nutritionally superior brains.

Later, at home, where I am still nursing along that cup of exotic coffee,  checking my social status on Facebook, when I hear the hoarse barking of a fox in the backyard. It is loud and startling, so I spill the last sip of coffee on the worn-out carpet in the room where the laptop resides on a desk that was a roadside rescue. The fox is barking again, excited by something  in the yard. A quick check from the window, and I see the headlights of the radio controlled cars the college students from next door are racing around: they zip about back and forth, with an insect sounding buzz, while their teenage middle eastern drivers laugh and babble in their mother tongue, delighted by these American toys.( Perhaps this is how they learn to drive when they later become taxi drivers to finish putting themselves through school, I muse, shaking my head at the absurdity of the thought and wondering what the Andean natives actually put in the coffee sold at Whole Foods to cause me to have thoughts like these.) It's just one of those weird nights when the eclectic thoughts keep floating through my head as I tap out a blog on the lap top.

There is no rhyme or reason to this evening except that it's once again October, and the darkness comes a little earlier each night, interrupting the circadian rhythm of we humans. We are such creatures of comfortable habit  we forget this happens every year, that we are taken a bit more into the place of darkness each night until it begins to swallow our daylight before the workday is finished. We are so accustomed to our indoor world being illuminated by artificial light that it is disturbing to go out into the twilight. Just a few short months ago we would be enjoying the gift of longer days, when the sun wouldn't set until the evening news came on the TV. We were watching the fireflies blinking; the cicadas were in full voice, and the wind was warm.

Tonight,in the gift of darkness, it is so still that you can hear the leaves falling with a gentle crunch, and the low mumble of the neighbor's television. The air is thin and crisp with just a hint of wood smoke, and the moon is large and low, casting it's light through the trees. In this time out of time, the enchantment of the evening becomes apparent...and the world opens to magic.

Posted by AmethJera at 3:57 AM