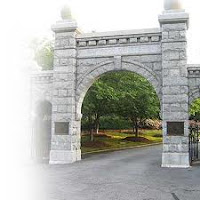 It was a dark and stormy night...No, wait...Once inside the graveyard a long shadow fell eerily over the headstone of...Okay, that doesn't sound right either.

Are you ready to approach this subject seriously? Me, too. And while I love a good ghost story, this isn't the time for one. I'm not writing an episode of Ghost Hunters or Walking Dead, so it's best to drop the pretension. This is a factual post about the history, purchase and use of one of the occultist's most mysterious agents-graveyard dirt, an ingredient used frequently in folk magic, but most especially in Hoodoo. To understand the history of graveyard dirt, we first have to understand the context in which it is most famous (or infamous).

Hoodoo is a system of conjure practiced in the Southeastern part of the United States which blends elements of African, Native American and European folk magick.( And yes, the word is magick... with no apologies. I prefer the Crowlean spelling to delineate the religious and ceremonial practice from the form of vaudevillian entertainment). It is often used synonymously with the term root work. Although it may share some of the same characteristics, it is not Haitian Vodou or New Orleans-style Voodoo, it is a separate and legitimate tradition with it's own rich history. It's popularity has grown over the last several decades and now root workers can be found all over the country-although it's heart and soul still lies in the deep South and Gulf states.

Hoodoo is often intermingled with Christianity as a Southern socio-cultural phenomenon; many hoodoo practitioners would be surprised to learn that what they are practicing is anything other than common knowledge or folk medicine within their community. Hoodoo, in it's proper context, is truly the 'power of the people', devoid of any maleficent connotation.

Root workers often learn to use what is available to them in their conjuration; the more cultural and sociological importance, the more powerful the item. Superstition surrounding such items stems from the magickal power and spiritual energy attributed to it. Belief  in the energy of a particular item begets and strengthens it's reputation...and so it is with graveyard dirt.

Both graveyards and cemeteries are burying grounds for the mortal remains of the deceased. Graveyards are most commonly associated with churches, where as during the 19th century cemeteries - burying grounds not associated with a church- became popular. Cemeteries as memorial parks became fashionable as a place to spend a quiet Sunday afternoon walking or having a family picnic. The fear later associated with cemeteries and graveyards did not exist then as they were seen by many as the  'home' of loved ones who had crossed the Veil. A stroll among the headstones was just talking a walk with Grandpa who was now in spirit, and it was viewed as a quite natural thing. Throughout my childhood my relatives and I frequented the graveyard and shared a fried chicken meal with my great-grandparents, and I was free to roam around and find the most interesting and beautiful graves. It lead to my adult appreciation of funerary art...which is another blog post for later.

Back to graveyard dirt,which is nothing more than dirt from a burying ground. It doesn't matter what the place is called...but how how you acquire the dirt, what you do to get it and the grave you get it from does greatly matter, because it will become the foundation of success or failure in your spell work. Each root worker has his or her own method of collection dependent upon their personal belief, but all of those methods adhere to the same basics.
http://paganwiccan.about.com/od/othermagicspells/p/graveyarddirt.htm


My personal methods are simple and vary according to how I'm spiritually led at that moment, but I always take time to formulate my plans before going further-that is I make certain my focus is clear. If I'm doing the working for someone else, then I want to be sure I know exactly what their intention is in regard to the matter at hand and what their expectations are for the results-after all, I am just the vessel...and they may be asking for something I'm not comfortable with doing. I always do a short meditation about the working and then gather my tools, which include nine pennies, a silver coin  (preferably a Mercury dime), some flowers, a small bottle of  holy water or liquor like rum or whiskey ( the size you get on airline flights are perfect!), a sturdy spoon or small garden trough, a zip lock bag with a file card, and a sharpie pen. If you're going at night you will need a flashlight...and you will need permission. It's the right and correct thing to do and keeps you from being mistaken for a vandal by an overly zealous security officer.

The traditional time for collecting graveyard dirt is around midnight.  This is fine if you are visiting a burial ground out in the country where it is a bit secluded and there is easy access. Please be respectful, and try not to look suspicious (Don't laugh, you're out in a church yard at night; the first thought that will come to any one's mind is that you're up to no good!) I would also advise against  going alone simply for safety's sake-taking a trustworthy friend is the smart thing to do if you will be in a secluded area. I also advise against climbing over gates or walls because it is not only dangerous to your personal health (you could fall) but you will be trespassing. If you're out for the thrill, it's better that you stay home until you can participate in the work with the proper frame of mind because this is, after all, essentially a ritual. Personally, I limit my excursions to places I am familiar with and  during the day when I can walk around essentially unnoticed by any maintenance staff. I take a bag lunch so I can spend time finding just the right place. Most large cemeteries have business offices where you can get a map of the grounds, which easily point you to the graves of persons of public interest, and include a list of rules and the hours the facility is open. Smaller graveyards may have a similar pamphlet available from the church office. Since interest in funeral customs and art has sky rocketed in the past few years, no one is going to think twice about you going about your business. It is not unusual to see people leaving small tokens, pebbles or coins on graves these days. Just use common sense and be discreet in your actions and everything will be fine!

Unlike some practitioners, I do not use correspondences when determining where to purchase my graveyard dirt. It is just my way of doing things, and those methods have worked for me. Some traditions assign various times and correspondences according to the type of work you will be doing.(http://www.mojomoon.net/hyatdirt.html)  I meditate and ask those who have crossed the Veil to assist me in finding the proper place. At the gate of the cemetery I leave nine copper pennies as an offering to the Gatekeeper and ask to be lead to a grave of someone with characteristics that relate to the work I'll being using the dirt in.  Usually I'm lead to the grave of someone who has lead a good life and has died heroically and in the line of duty, like a firefighter or police officer, or someone who has been a leader in the community. If  the working is to restore ill health I look for the grave of  a doctor or other health care practitioner with a good reputation, if it is to win a court case, I try to find a judge.  This way I'm assured that the spirit there is a caring, selfless person and is connected in some way to the intention of the spell. The use of graveyard dirt in a spell is employing sympathetic magick, and there are powerful cultural beliefs connected to  the role of the dead in rituals of invocation. I place the flowers as a way of introducing myself and ask the spirit there if they are willing to assist me in the work. If I get a positive response and I feel good about our telepathic conversation, I remove a small square of the sod, take some of the dirt, put it in the bag and make the proper offering and payment with the silver coin and holy water/liquor, then replace the sod. In taking the dirt and making the offering I am, in actuality, purchasing the spirit's services for the work.The spirit has fully agreed to this contract for his or her services and will assist in the working for the required period of time, then it is released and free to return to it's resting place. The spirit is never forced or coerced into doing something to which it does not agree...that would be foolish and dangerous, as the purchase and use of graveyard dirt is an act of necromancy. Once again, it is wise to follow the time honored precedent of  not calling up what you cannot put down. The name of the decedent and information found on the headstone or marker is recorded on the file card and the card dropped into the bag with the dirt. I know that there are many preferences as to which part of the grave to purchase the dirt from, but I believe those are individual preferences as so I take dirt form where it is easiest to remove and replace the sod and soil.

I employ the purchased dirt and the accompanying spirit's services mainly in protection or prosperity spells. Occasionally I mix the dirt with sulfur, red pepper, rue and other ingredients for a binding powder. When I do a love spell for someone, it is usually pertaining to self-love and acceptance, or for the individual to find love. I do not do love spells to bind someone to another unless they are married, and then only under specific circumstances. I respect the free will of others, but the vow made during the marriage ritual is already a binding that I believe my work simply reinforces. I will not do a love spell/binding to keep partners together in an abusive relationship or when there is a legitimate reason for them to part, only if the couple needs a 'little something' to keep them on the right track. Usually I have spoken to both partners and we are all in agreement before any work is done.

I cannot stress enough that you do not simply walk into a graveyard and take dirt from a grave at random. This is not a joke. You don't know who or what you are bringing home with you, and you certainly do not want to employ any individual entity that may turn against you or harm others. Know who is in the grave before you purchase that spirit's services and above all else never simply take the dirt without proper payment-that is stealing. And I know that some practitioners use a commanding tone with the spirit they have employed because the have in fact enslaved it. That's not the way I personally see it. I believe that the spirit in the dirt has agreed to a contracted task which it will honor, and therefore I have no reason to declare dominion over it. We are working together in a business relationship and share the same goal. I found that respect and thanksgiving goes a long way in the success of this relationship.

Posted by AmethJera at 1:38 AM