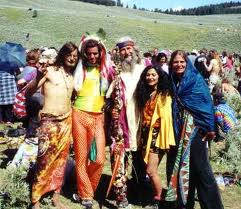 Living an unconventional lifestyle has it's desirable moments for me-I love my insanely artsy friends who are unfettered and unencumbered by the disapproval of society. Those who have created their own Gypsy Nirvana are my favorites-the folks who live in 'little houses' off the grid, eat nothing but what they grow in the yard, and Free Cycle to their hearts content. There are days I am absolutely certain I want that " live with out care" lifestyle, unattached to  material things. Early in my spiritual journey, I wanted to break away from the mundane corporate life I knew I was headed for so I could attend all the Pagan festivals and rock concerts I possibly could and be a gypsy, because I think within reason, it's okay to float around and see the country. In fact, I highly recommend it. Go and experience as much as you can, while you can and while you're young enough to recover from any folly along the way. I wish that I'd followed my dream of jumping in the car and driving the entire length of Route 66 alone, that I'd moved to that mountain cabin in high Colorado, or hiked the entire length of the Appalachian  Trail... I really do...because ten years ago I had the money and the time to do all that and then some. I wanted to live by the sea in Nova Scotia for a few years...and in a tiny Irish village. I wanted adventure. Most all I wanted to live, just live. It was great fun living with three friends in a third-floor walk-up in the Village when I was enrolled in art school. I didn't mind working two really shitty jobs, because I knew they were temporary and would eventually end. I kind of enjoyed eating noodle ring and beans and rice, because it made that ham sandwich I got at the lunch counter job on Saturday taste that much better. Besides, I would have really cool stories to tell my grand kids someday.Who needs money when life is so much fun?

The thing that looms large in all of this is individual sustainability...how in the world do you support yourself while you're sowing your wild oats? Fresh out of college, you usually still have Mom and Dad to hold the safety net if you screw up or run out of cash. At least you can move back home if things don't pan out, right? And what do when, in the far distant future-which is closer than you think- what you thought you had to fall back on is no longer there? There are only so many ways and places you can peddle your artsy wares, and a few weekends in a scorching a parking lot flea market made me re-think my disdain for the evils of the corporate life.

That cool, hipness of the Andy Warhol era was only made possible because good old Andy sold a lot of prints of those soup can and Marilyn paintings, had a number of wealthy patrons, and he was franchised. The blasphemy that no one in the anti-establishment would speak is that Andy was a one-man corporation which made him one rich bitch.

I wanted to thumb my nose at all of this and return to the comforting  illusion that one day, someone would come along, take note of my creative brilliance, and launch my fabulous art career so I could quit my job at the lunch counter ...you know, the one I hung onto because I could get a free ham sandwich on Saturday. I was pretty damn proud to be poor then, because somehow in my not- yet-mature mind I thought it made me a better Pagan. Pagans were supposed to be Bohemian and poor, weren't they? Didn't we all make our own clothing and eat out of the same pot of beans and rice? We hadn't sold out, we were penniless and non-materialistic, which showed EVERYONE just how dedicated and sincere we were to our path. We were People of the Earth,damn it. We were supposed to be poor, and the majority of us acted like someone should have given us a medal for being so noble.

The stereotype of the 'poor Pagan' has been around since the middle ages and long before Gardner wandered into the woods to join a coven of witches. They were the people, if you recall your history, who lived up in the hills and out in the country continuing to keep faith with their local gods  when Christianity had claimed the larger cities and towns. They lived off the land,and occasionally did work for a wealthy landowner. No one expected much else from them. This mindset has been passed from generation to generation through the years and right through the advent of the rise of modern neoPaganism and witchcraft in the 50s, 60s and 70s. Part of that individualized spirituality requires a certain amount of independence and self-sufficiency, and yet too many of us are unable to pay the bills.

So, where's the disconnect?

I believe some of it arises from 'Pagan values', which are different from the  conventional values of our culture which views working solely for financial reward and gaining material possessions acceptable. A lot of us-me included- don't care to keep up with the Joneses. For the most part we are pretty happy with what we have and are satisfied that we have just enough. We just want to live and let live and be left alone and allowed to practice our religion in relative peace. I loved being a barista, but I couldn't make a living at it. And here is where the disconnect lies:  we don't put enough- if any- emphasis on the fact that we need to work at making a living and not just have a job. I have a number of friends who are terrific massage therapists, but are failing to make ends meet because they are putting all their energy into the esoteric side of their practice and not enough into the business side. Even though they were willing to go to a conventional school to learn their skills, they are unwilling to build a practice by doing the dirty work involved. We need to stop wrinkling up our noses at the parts of life we don't like and find distasteful. We need to change the mindset that making money is evil, that anything to do with corporate America is selling out what is genuine and authentic. The only way to be  financially successful  is to put forth the effort to be good at whatever we can do to make a reasonable living and not a burden on  our families, friends or society. That doesn't necessarily mean we all need to have jobs that require three piece suits and briefcases: my cousin makes a very respectable living for himself and his family as an auto mechanic...he also makes beautiful wands from found wood on his property. Another friend is a hairdresser, who reads tarot on the weekends, another works on a production line in the auto industry and sells his handmade jewelry at festivals. There are Pagans who work in all phases of conventional health care, as school teachers, and in factories and the military, and all of them are making a decent wage to live....because they have shaken off the stereotype of the 'poor Pagan'.

I personally abhor most of the tenets of the currently popular 'prosperity ministries' seen in fundamentalist and evangelical churches. I don't believe just 'speaking the word' and having faith will make the money miraculously appear in our pockets.However, I do believe supporting Pagan business in our own faith community does lead to financial and spiritual prosperity. I believe that employment networking among peers does lead to better job opportunities and better living conditions, and that we as Pagans need to optimize that tool more frequently. I believe we need to strive for just a bit more and just a bit better in our employment so we can achieve the desirable level of independence we are ardent to talk about, and if that means cleaning ourselves up, upgrading our skills and educating ourselves in a genuine wage earning mundane career, so be it. The majority of us are already striving to make that change for the better, save for a small segment of 'traditionalists' who will never be open to change. Save the Bohemian lifestyle for the festivals and strive to transform the stereotype of the poor Pagan into one where Pagans are integrated into every part of society as contributing members

Posted by AmethJera at 8:39 PM