The Problem With Memes...

I am a Wiccan. And I do not like the meme pictured below for several reasons....

I do not like "In-Your-Face" anything...particularly concerning religion and specifically when the religion in question is a form of Paganism. This meme fairly drips with contempt. Not only is it an inappropriate way of communication, it's just damn annoying.

I do not like the tone of haughty arrogance with which it is written. It conveys a feeling of smugness and superiority."...we do not force our views on others." Really? Sounds pretty forceful to me. A more constructive and less annoying way of putting this would be, " These are our beliefs."

No, Wiccans do not worship Satan, a spiritual entity identified in the Abraham religions as a fallen angel who challenged and betrayed G-d. It is unnecessary to be snarky about this, because the general public believes what it's been told by Hollywood and drilled into them by certain religious sects, and for a long time no one refuted the accusations. People will repeat without malice what they believe to be the truth whether or not it is factual. As a Wiccan, I have an opportunity to educate others on this point, and have found I can do that without being confrontational.

It generalizes our faith. There are many variations on Wicca. We don't all hold fast to the Three-Fold Law or the Rede; we don't all worship the same deities; not all of us wear pentagrams... And the word is pentagram, not pentacle, unless you're wearing an amulet of some sort such as the Seal of Solomon [ http://en.wikipedia.org/wiki/Pentacle] In Christianity, the pentagram is used to symbolize the five wounds of Christ, or in the same way that we are familiar in reference to the Elements and Spirit. It is also found in Freemasonry, among other esoteric orders.

We are not all healers and shaman. Each of us have  unique gifts, which may include the ability to heal. Shamanism is a form of spiritual practice which takes years of study to master. You do not suddenly wake up some morning and proclaim yourself a shaman; that us usually left to a community or council of elders in a specific tradition to determine.

A seasoned practitioner knows that magick (or magic) is neither 'black' nor 'white', but identified by the intention of a specific work...and some Wiccans do indeed cast what can be defined by others as
'evil' or maleficent spells.  Magic is a power used in many ways and for many reasons, both negative and positive. It does not always "change the world", but rather focuses the will of the practitioner and attunes to a specific situation.

Paganism is theoretically the term for anyone not engaged in an Abrahamic religion, although Buddhists, Hindus,Taoists and a few others do not readily identify themselves as pagans. There is a difference between pagan in the lower case form and Pagan, a proper noun which identifies a practitioner of the NeoPagan religions.

The statement " calling a Baptist a Lutheran" is erroneous. The two are both Protestant Christian traditions. A more accurate statement would be likely " calling a Christian a Hindu", because the differences in belief  systems are unmistakable.

"It only shows your ignorance." Actually, it shows the ignorance of the writer...glaringly. For someone who "harms none", this single meme has undone much of what many of us have worked so diligently to win through years of dialogue and teaching in the mainstream. It perpetuates stereotypes and misinformation. The writing is rather immature. Adding "Blessed Be"   to the end at this point is grating and insincere. I'm assuming the  little moon-phase graphics were added in just to let everyone know that a 'real' Wiccan/Goddess-loving Pagan wrote this sorry diatribe, but  the gesture is lost and   is rather shallow and juvenile. 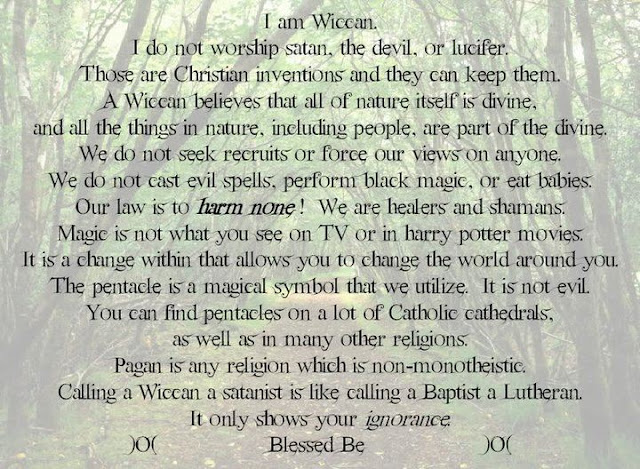 Frankly, I not only find this meme offensive, it sounds very much like thinly veiled hate talk to me. Someone wants to get into a fight.  Anyone wanting to take up the " Look what the Christians did to us" gauntlet can spare themselves the effort of argument with me. Put away your sack cloth and ashes and quit beating your breast. In 25+ years of practice, with 20 out of the broom closet, no one has ever accused me of  being a "baby eater". It's a laughable analogy we need to purge from our vocabulary once and for all because it's only used for shock value.Some of us need to take the chip off our shoulders because the litany of  wrongs done to them  are simply fabrication. Unless you have personally suffered legitimate, verifiable discrimination , drop the victim mentality, because you're boring the crap out of the rest of us with your 'Emo' ranting.

While I honor the tragic deaths of those who were and continue to be  savagely murdered at the hands of witch hunters throughout the world, I believe it is much more important to recognize that the majority of these victims were not, in fact, witches.Stop trying to hang on the coattails of  The Burning Times because your employer requires you to take the metal out of your piercings or cover up your witchy tattoos or refuses to allow you to wear your " Witches Do It In Circles" t-shirts on casual Friday. While I do agree you have a right to personal expression on your own time, your employer gets to make and enforce the rules while you're representing them. You are not being discriminated against or singled out to be victimized. Instead of jumping to conclusions about what people of other religions think about you because it makes you popular in "the crowd", try talking to them about your beliefs in a calm, polite manner. Trying to understand their viewpoint and educate them-and not expecting to change their mind-is of much more benefit to the community and the creation of tolerance than arguing, finger-pointing and belligerent memes posted to Facebook.
Posted by AmethJera at 5:59 PM