My personal history of trick or treating is abysmal. I remember one year going to five or six houses with my Grandmother in tow and getting a piece of bubble gum and five whole pennies while Mom had a beer with the neighbors; another year I went out with some friends and we braved going to the house of a particularly cantankerous old lady (rumored to be a witch, of course) and got invited in for some home-made ginger spice cake and a cup of cider instead of being shoved in the oven and eaten ( Less exciting but more rewarding.) I have a few spotty memories of going around with neighborhood kids whose names I can't recall. At that time, treats were handed out in small bags and usually contained four or five pieces of candy and a lollipop, or you got a candy bar and an apple. We didn't come home with ten pounds of treats in a pillow case, but no one worried about tainted treats or razor blades then, either. The local volunteer fire company used to sponsor a community Halloween Party, and everyone would go there after making the rounds in their immediate area. Kids didn't pile into a car then and have their parents drive from neighborhood to neighborhood collecting their stash. They went to their friend's and neighbor's houses- and only to the houses with their lights on. 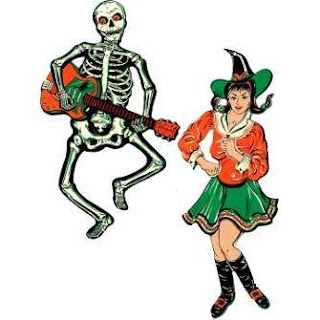 The most decorating anyone ever did when I was a kid was taping a few thin card stock cut-outs in to the windows. There were no Halloween lights- lights were reserved strictly for Christmas. There were no elaborate yard decorations. I loved to decorate for Halloween, there was always something slightly naughty and taboo about it. The choices were restricted to witches, skeletons, bats and scarecrows. Occasionally there was something outside the norm, such as a monster or a haunted house, and the majority of these early decorations came in limited colors- black, orange and white, green and yellow. I think the graphics for many of the decorations of my childhood were fantastic, and I still do.There was never anything too gross, maybe a skeleton had an rolling eyeball or was wearing a tattered vest, that was about it in the fright department.

My first yard decorations were made from the Styrofoam packing material from my new stereo system and a couple of pieces of cast-off plywood. This I managed to construct into  three reasonable facsimiles of  head stones, which I planted at the end of a hole made by removing a few pieces of turf from the front lawn and raking up the earth underneath to look like a new grave. The addition of the shovel and an old (lit) kerosene railroad lamp made it more realistic. I cut bats out of black construction paper, tied strings to them, then hung them from a low branch of the huge maple. A dry cleaning bag made a terrific ghost after dark. I stuffed some old clothes and added on an old Jack-O-Lantern candy bucket for a head and had a scarecrow...and of course there was a real Jack-O-Lantern carved from a pumpkin and carefully lined with aluminum foil to boost the illumination and keep the pumpkin from burning. I learned early on that if you put the candle you were going to use in a drinking glass, the wind couldn't blow it out. A few years later I added a blow-up skeleton which I hung on fishing line so it looked like it was running through the yard.

My best ally was imagination. We lived on a corner lot, so the yard was visible from two sides and lit by a couple of street lamps on poles. The maple tree shaded most of the decorated area, so the light danced across the open grave and the flame from the kerosene lamp- kept low- danced in the breeze and gave a spooky illumination to the area. I used to hang the speaker from the stereo up so they were in front of the windows, and played A Thrilling, Chilling Halloween from Hallmark on the cassette player so the place had the right atmosphere. The display grew year by year, and one year my Grandfather decided to cook hot dogs on a grill in the front yard to hand out to the kids with a cup of hot chocolate ( it was pretty cold in our part of the North by October 31st!) The neighborhood kids learned that our house was one of the safe ones. I think we had one of the best displays in the neighborhood because it wasn't too scary for the little kids...and we had a lot of kids, usually around 250. They returned each year, and there were whole families that came to pose together and take photos over the course of a decade. It was a wonderful way for the neighborhood to come together. One little tyke ran back up the side walk to me and setting down his goody sack to dig through it,"This place is the bestest tricky-treating ever!"he said, dropping a miniature Baby Ruth into my hand before running back to his mother who waited at the end of the side walk.

There were a couple of sparse years during the mid 1980's when money was tight- I didn't pack bags and could only give out two pieces of bubble gum because that's all we could afford. I'm sure the kids thought we were being cheap, but the fact was we were eating spaghetti twice a week to stretch our food budget and installed a wood burning stove in the basement to replace the oil furnace because oil was so expensive...and we nearly froze that year. It was so cold in the house we slept in sleeping bags under the covers in our beds, fully clothed. Giving away two pieces of  bubble gum that year was a luxury- and at least we gave something away, because as I remember, the street was awfully dark that year. People weren't driving their kids around much, either, because there were gas rationing lines and you could only fill up the tank once or twice in a week.

I always made sure I had Halloween off from work. A couple of times I sacrificed two days of vacation just to be off on that day so I could take my time decorating the yard. The year I worked on Halloween day I regretted it. My relief was late and I had to work three hours longer than scheduled. The buses were off schedule, too that night. It was getting dark and the kids were already on the street when I got home. The yard wasn't decorated: I remember throwing a single string of  purple lights onto the branches of a sapling in the front yard and plugging in a plastic blow-mold pumpkin because there wasn't time to carve a Jack-O-Lantern. The kids came-but they were disappointed there were no real yard decorations. I pretended that I had planned to go 'minimalist' that year in anticipation of returning with a bigger and better display the next year. Deep inside I felt an emptiness. This was Halloween? It was the night I looked forward to all year, and it was nearly over before I got home from work. After the kids went in for the night I turned off the lights, took the plastic JOL inside and called a friend to go out to dinner with me. It was a solemn evening even in good company. That night I dreamed of being unable to get home in time for Halloween and missing the day altogether. In my dream I would get off the bus and run the entire length of the neighborhood to get home...and there were no trick or treaters. It was too late. I was too late and had missed Halloween. The dream had a foreboding feel to it, and the worst part of it was that it kept repeating, just like in the Bill Murray movie Ground Hog Day. I would get off the bus and run the length of the neighborhood, and couldn't find the house, or I'd get lost on a side street, and it would get dark before I could get home. I still occasionally have this dream; it's the only repeating nightmare I've ever had, and every time I have it, it's the same: I awake feeling cheated out of  the one thing that gives me joy during the year.

Posted by AmethJera at 4:13 AM

Email ThisBlogThis!Share to TwitterShare to FacebookShare to Pinterest
Labels: Halloween, trick or treat