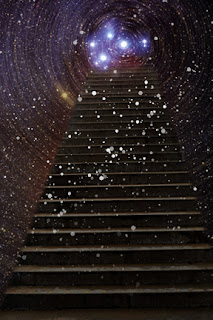 Now that's it's deep into October, the feeling of floating like so many falling leaves is fading. The few days remaining just before the end of the month are always the most magickal for me because the portal to that world beyond our own is opening. There are more than souls that cross the Veil: there are memories.
As the light grows short, the memories grow longer. There are things and people I long for in my life who are gone forever, and I need and want them again... if only for a moment. The re-creation of life from memory as it once was  is easiest at this time of year as we all- knowingly and unknowingly-yearn for the comfort of what used to be. I frequently dream of all the cats I've had over my lifetime who are now dead. Some of them have been gone 20 years or more- Dingle Berry, Kimmie, Weenie, Tinker. They appear singularly and in groups in different dreams, and sometimes I don't recognize them as they look in the dream, but I know who they are by their distinctive personalities. It's the same with humans- They are often shades which never quite manifest in their physical forms, but I know they are there because I feel them. i often dream of being with a certain someone somewhere and awaken to the reality they are dead.

I don't often dream about JD; I have probably only had a handful of dreams about him since he died 14 years ago. I suspect that's because when I could finally put away my own selfish grief I became happy for him: he had simply gone home. The discordant life he'd been living in the last few years was over. He was on a journey somewhere else which transcended this realm of existence. I know he's there, I can feel his presence, although he seems very far away. Sometimes it's a stretch, but we reach for each other across the heavens and our fingertips and hearts touch. At times I have glimpses of what he's doing, and I know he's watching me, too. Very often, especially when I am caught up in some absurdity, I hear him laugh. It's a slightly sarcastic outburst, a single loud,"Ha!", that caps the irony of the situation. It grounds  me and  tempers whatever I'm thinking. Other times I will be meditating or praying, and  hear just a snatch of disembodied guitar music. It's a natural thing for me to hear. Life hasn't changed, it's just transformed to the next level. Eventually we'll get caught up and be together.

I'm still putting myself together for Samhain: the pork roast is in the freezer and the ingredients for pumpkin, cranberry and apple breads are in the fridge. Sometime this week I'll  throw together a batch of sugar cookies to cut out and paint with confectioner's frosting. I'll make up a few trick or treat bags just in case anyone actually shows up at the door this year...and I'll have a real Jack-O-Lantern.

Because I am now on a spiritual journey with truly like-minded individuals, I will be attending my very first public Samhain ritual in my adopted home state. Four years ago I packed my bags and got on a train for a one way trip headed South to my new life...not that there was anything wrong with my old life...It was just something I had needed to do for a long time and I'd finally gotten the right nudge. It hasn't been easy, but there have been absolutely no regrets. Okay, maybe one: I am nearly 1000 miles away from where my ancestors are buried and no one decorates their graves. On Samhain night, I'll put out their photos and trim my altar with flowers and a Jack-O-Lantern then sit with them for awhile to remember. During that time, perhaps they'll come, and our souls will embrace.