I'm going to admit this at the beginning and get it out of the way: I like dressing for the part. It doesn't matter what the part is, we all don multiple hats because nothing in our lives is one dimensional. You can see the importance of appearance by the example I just used-our language is peppered with references! We "wear many hats", "dress to kill", "dress for the occasion" and "put on the Ritz"( For those of you not acquainted with that specific phrase, it's a 1930's reference to the fussy, pretentious attire folks put on to attend classy formal affairs at the Ritz Hotel in New York City http://youtu.be/IFabjc6mFk4). I may be showing my age, but personally, when I call the police, I want the person who shows up at my door to look like a cop-blue uniform, badge, gun, the whole nine yards. ( "The whole nine yards" is another clothing/appearance reference originating from  the belief that tailors often used nine yards of fabric in making a quality men's suit.) I'd much rather see my car mechanic  wearing greasy coveralls than a three-piece assemble because, well...I'd probably be more confident of his ability to fix my car.

It's the visual image thing we humans have that links appearance with trust and credibility. Our brain at it's most basic nature tells us to trust what we see because vision is more readily perceived to be reliable than our other senses. And while that may not necessarily pan out to be true in our modern era, when our ancestors were within striking distance of a lion, it usually mean you were about to become dinner for the pride.  Seeing a lion hunkered down and fixated on you while licking it's chops was the visual cue to fight or flee. There was no mistake in the message.

Although our world has changed, some visual cues remain strong.  Human beings are psychologically wire through early visual imprinting, and it's exactly why public relations firms rely so heavily on "branding": expectations triggered by the appearance of an individual or product. The appearance morphs into a characteristic of the image. The bottom line is identification and recognition. There need be no actual proof behind this because belief is hinging on perception.

Fact: Many Pagans love to dress up.
This is not just an assumption on my part, it's a fact verified by attendance at any place we gather, whether it be a conference, Pagan Pride Day Festival, or open circle. Turn in any direction and you'll likely see someone wearing a long robe, a cape, or some sort of Renaissance mash-up including a poet's shirt and knee boots, or a bustier and skirt. Clothing usually runs the gambit of "I'm a little bit Pagan" (sung to the tune of Donny and Marie Osmond's "I'm A Little Bit Country")... a peasant blouse, jeans and silver occult inspired jewelry...to "Look at me, I'm Aleister Crowley" ( To the tune of "Look at me, I'm Sandra Dee"), which includes full occult robes with mystical sigils and a pointy hat. I have seen some wonderful things from Holy Clothing and the Pyramid Collection and custom-tailored vestments in amazing silks and gold embroidery. The variety is limitless and the quality of taste seems to run from subdued to outrageous. It's a matter of personal style and what kind of image you'd like to project. Some folks just go for a simple black turtleneck and black pants, and that's okay. Last year at our local PPD, I saw a guy wearing a full rack of antlers from a seven-point buck and  a tooled leather vest with a Royal Stewart hunting kilt and a fox tail hanging down the back and a pair of studded Chuck Taylors. Not joking. You know what? Because he was comfortable in his own skin, he looked perfectly normal in that particular setting. Okay, maybe not normal....but he blended in. 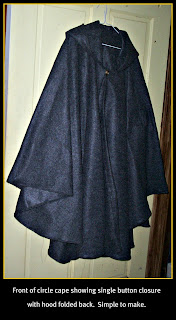 Notice I said 'that particular setting', because I do believe that there are inappropriate places and situations in which to wear our most Pagan of garb. Flamboyant ritual robes are not street wear. The gods love him ( and I certainly do), but I once saw an article in the Daily Mail featuring Oberon Zell- Ravenheart out grocery shopping in full wizard's robes... and it made me cringe more than a little. I use public transit a lot, and the times I use it to get to the place we're having a circle, I pack my ritual garb in a bag. I would never think of wearing even my circlet on the bus-not because I know I'm going to get stares and questions, but because there is a time and a place. ( I do, however, wear my pentagram in public. That's different. It's a statement of faith, not a bid for attention. The phrase "When in Rome..." is sage advice."

The folks in my home circle only dress up for special occasions, like Sabbats. I personally like the all black ensemble idea-black blouse or turtleneck and pants. It's simple, and if we go out to dinner afterwards, I don't have to change. Sometimes I do bring along my grey wool cape to keep warm. If you invest in one piece of  "magickal" clothing, I'd recommend getting a cape because it's versatile. It can be used to cover mundane clothing, or for warmth. Last year I made a full circle cape that can be used over a coat because we've had some unusually cold weather. The cape adds an extra layer of warmth and blends into the setting. It can be worn as street wear in a pinch, and because I made it myself I could control the cost. Capes are an investment because they cost a bit more than a single item of clothing. As it happens, I can sew fairly well. I make a lot of clothing, so a cape-made without a pattern-was not a huge problem. The fabric I chose is a wool/polyester blend heavy felt in charcoal gray. The material was inexpensive and durable. Adding in the price of the button and matching thread, the whole thing came to around $25. The only part  that was a little tricky was gathering the hood to fit the neckline, and making the buttonhole on the sewing machine. The entire project from start to finish took a little over 2 hours, and I have a lovely cape. ( If you really need a pattern, there's one here:http://www.eg.bucknell.edu/~lwittie/sca/garb/cloak.html).
[C-1,Pagan Blog Project 2012]

If you are even moderately handy, you can make a basic long T-robe much the same way. Religious communities refer to this as a Tau robe, or an alb. The simplest version of this particular robe has a slit for the head . It can be made with a V-neck, or the neckline can be gathered in a purse-closure effect. The weight and color of the fabric is up to you and will determine the final cost of the project. Want something fancier? Here you go:http://www.personal.utulsa.edu/~marc-carlson/cloth/bocktunc.html
My recommendation for both garments is to purchase something you can wash at home Be sure to wash all fabric used in projects before cutting the item so any sizing can be removed and the fabric be allowed to shrink (and it will). The sleeves and hem of the robe can be decorated any way you choose, or left plain. While we're on the subject of garment making, I think it's fair to discuss sleeves. Yes, sleeves...you know that we love robes with those impossible elongated pointed sleeves because, well, they look cool. I have seen some robes with those very sleeves that are absolutely stunning...and I have also seen them go up in flames...while being worn by a priest during a church service. There is nothing that add more excitement or a high note of hilarity to a solemn mass that watching a priest dancing around beating out the flaming sleeves of his garment, or being chased down and doused with water by a gaggle of teenaged acolytes. Seriously, though, those sleeves aren't very practical during a ritual, and you can be injured if you step upon, or snag one during an incantation or accidentally drag it near an open flame. A better answer is to decrease the width and length of the sleeve more  to 3/4 length, or at least be able to roll them up if necessary so you can work. ( I have sewn a thin tab inside the sleeve at the elbow and sewn a matching button inconspicuously to the outside so the look it creates holds up the sleeve. It also gives it a nice drapery effect.)

Last year I wrote a piece about Pagan clergy vestment which can be found here:http://amethjera.blogspot.com/2011/03/funny-you-dont-look-pagan-then-again.html, so I don't feel compelled to say much about it in this current post, except to remind you that if you are officially ordained clergy, you are indeed entitled to wear clerical garb, including a white collar. A word on this: the collars are uncomfortable and expensive. A traditional minister's collar is needed for most clerical shirts and will require two tiny, expensive metal buttons which are easily lost, or a tab insert. Both the insert and the collar are made of stiff plastic and will dig into your throat no matter how large you buy them ( a too large collar will not fit the shirt properly). Linen collars are available but are custom tailored and require starching to keep them in shape. The advantage of having clericals is that they allow you to look acceptably professional making hospital calls-especially in an emergency. Traditional clericals are black shirt, trousers or skirt, and a dress jacket. My favorite clerical shirt happens to be moss green, which I personally think resonates with being Pagan. This is one of the few places where there are more alternatives for women than men. If you are a woman, and seriously interested in clericals, this is my suggestion on where to get them:http://www.womenspirit.com/Products.aspx?CATID=16

Do clothes make you Pagan? Yes and no. You can certainly be a practicing Pagan in what ever tradition you choose without the fancy trappings and robes (or just go "skyclad"). Personally, I suspect the gods don't care what you do and do not wear when you are in communion with them. However, I do think it's nice to put on the robes now and then, especially when you need a little extra boost to be put in the mood, or when you want to make that switch from the everyday mundane...or when you want to express the Divine within.