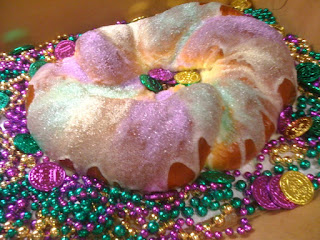 This just about the best recipe for a traditional Mardi Gras King Cake I have ever found! I love that this one has the addition of apples and cream cheese filling because it makes it more interesting. Personally, I'm a little leery of putting the tiny plastic baby inside the cake because of it being a choking hazard: put the baby on top as a decoration and substitute  a whole pecan inside the cake to preserve the tradition. Colored sugars and plastic king cake babies are generally available in the baking supply area of Michael's or AC Moore stores. You can also try the Dollar Tree. For better flavor, rehydrate the raisins in a small saucepan, covered with spiced rum, over low heat just until plump and tender. It is best served when it is slightly warm or room temperature.

Great with Creole Coffee, which is black coffee with a spoonful of  good quality molasses stirred into it (omit the sugar or sweetener). Let the good times roll!

In a large skillet over medium heat, melt the butter. Stir in the apple slices, brown sugar, cinnamon and salt, and cook, stirring frequently, just until the apple starts to soften, 3 to 4 minutes (the slices should still be crisp). Remove from heat and stir in the raisins and toasted pecans. Spread the apple mixture onto a baking sheet to stop the cooking process and allow the apples to cool quickly, then cover and refrigerate until needed.

In the bowl of a stand mixer, or in a large bowl using a hand mixer, beat together the cream cheese with the vanilla, salt and sugar. Add the beaten egg to the cream cheese mixture and beat until thoroughly combined. Cover and refrigerate until needed.
Cream cheese glaze

In the bowl of a stand mixer, or in a medium bowl using a hand mixer, whisk together the cream cheese, butter, vanilla and salt until completely combined. With the mixer running, add the sifted powdered sugar, one spoonful at a time, until fully incorporated.
Brioche dough and assembly

1. In a small pan, heat one-half cup plus 2 tablespoons of milk over medium heat just until warmed. Remove from heat and pour the milk into a small bowl or measuring cup. Stir in the yeast and 1 teaspoon of sugar, then set aside until the milk is foamy and the yeast is activated, about 10 minutes.
2. Whisk the 2 eggs in the bowl of a stand mixer using the whisk attachment (or in a large bowl with a hand mixer) until light and fluffy, about 1 minute. Stir in the yeast mixture and remaining one-third cup of sugar until fully incorporated.
3. If using a stand mixer, switch to the paddle attachment. With the mixer running, add the butter, 1 tablespoon at a time, until incorporated.
4. In a medium bowl, whisk together the flour and salt. With the mixer running, add the flour mixture, one spoonful at a time, until fully incorporated.
5. Remove the dough to a lightly floured surface and knead until it is soft and somewhat silky (it’s a rich dough and won’t be entirely smooth), 5 to 7 minutes. Place the dough in a large, oiled bowl and lightly cover with plastic wrap. Set aside in a warm place until doubled in size, 1 to 1 ½ hours.
6. Meanwhile, make an egg wash: Combine the remaining beaten half egg with the remaining 2 tablespoons of milk.
7. When the dough is doubled, punch it down (it will be very smooth and elastic) and roll it out onto a lightly floured surface into a 10-by-28-inch rectangle. Lightly score the dough lengthwise to divide the dough into 2 equal halves.
8. Spoon the apple filling down the length of one side, leaving a 1 ½-inch border on the top, bottom and sides. Repeat with the cream cheese filling down the other side of the dough, leaving a 1 ½-inch border on the top, bottom and each side. Lightly brush the edges and center of the dough (along the score) with the egg wash to moisten. Gently and carefully pull the dough over the cream cheese filling, sealing the edge of the dough along the score mark. Repeat with the apple filling. Press the sealed edges, making sure they are secure (otherwise the fillings could spill out while the cake bakes).
9. Gently twist the length of the dough to form a braid-like shape. Wrap the dough so it forms an oval wreath and gently press the edges together. Carefully transfer the wreath to a parchment-lined baking sheet.
10. Brush the top of the wreath lightly with egg wash and cover loosely with plastic wrap. Let the dough rise until almost doubled in volume, 45 minutes to an hour, or loosely cover and refrigerate the dough overnight, removing it from the refrigerator about 1 hour before baking for the dough to come to room temperature.
11. Heat the oven to 375 degrees. Lightly brush the wreath with any remaining egg wash and place the sheet in the oven.
12. Bake the cake until golden brown on top and a toothpick inserted in the center comes out clean (the toothpick will remain moist if it hits the cream cheese filling, but there should be no crumbs sticking to it), about 30 minutes. Rotate the pan halfway through baking for even color.
13. Allow the cake to cool slightly before it is frosted (if it’s too hot, the glaze will run off the cake and not adhere). Drizzle the glaze evenly over the cake, then lightly sprinkle on the colored sugars. If using the plastic baby, hide it somewhere in the cake (press the baby in through the bottom of the cake so as not to disturb the top or sides of the cake). Serve the cake warm or at room temperature.