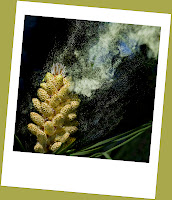 It's a random thought day. Nothing in particular but a lot of little snippets of stuff of interest- think of it as a conversation over coffee.

Blame it on Mercury retrograde or the dark of the moon or the invasion of yellow pollen. I was aware of the other two for a few weeks prior, but the yearly attack of pine pollen is always a surprise because it  suddenly shows up everywhere in central North Carolina. And just for the record, even though it's officially known around here as yellow pollen, it's actually electric neon green....and coats everything like the gods have just had a flour fight with it. Blame it on the abundance of longleaf and loblolly pine in the area. It's the sperm of the pine, according to an article on the WRAL news website. The image of pine trees jacking off  into the air doesn't help me appreciate it more guys, thanks. Maybe the predicted rain will help temporarily.Until then, I am resigned to the drawn, itchy feeling of my skin and  runny eyes. It is everywhere and even manages to get through under the doors of the house; you can skate across the hardwood floors in your bare feet and leave a faint train. Making your way through the yard and you leave eerie greenish foot and hand prints. Don't even think of opening a window or you will be shaking it off and sweeping it up for weeks. The bees love it, though.

The pine tress aren't the only thing in the mood for love around here. As if the squirrels flagging their tails and sniffing at one another all over the yard aren't entertaining enough, tonight the raccoons were at it. Again. The sound of mating raccoons is unmistakable, something slightly akin to a banshee being thrown through a wood chipper. It's a chilling sound that goes right through you, especially if you're caught off guard in the middle of a dark, moonless night. Evidently raccoons have never heard of whispering sweet nothings.

I said that we need rain-we do. All the vegetation in the yard is crisp and dry and the azaleas are struggling to bloom. Sunday morning something knocked a few electric wires off a house up the block and the result was a convention of firefighters who could do little more than stay out of the way of the dancing live wires until the power company arrived to kill the circuit. The entire neighborhood was treated to the rapid-fire pops, crackles and booms of the transformer as it shot curtains of silver white sparks down into the dry pine straw. Think fireworks interspersed with machine gun rat-a-tat and you've got it. Add in the vibration and rumble of fire apparatus and sqwalking EMS radios and you can see why I was too dead to show my face in church that morning.

The afore mentioned rain is needed desperately and promised by morning by our local Weather Icon Greg Fishel and his Duel Doppler 5000 Radar in the guise of "serious thunder showers", " Wind-driven" rain and " Possibly a tornado or two"...all to happen during the morning commute. Oh, goody...it might just be a morning to stay in bed late. Notice that he didn't say tornado warning or even tornado watch.Greg has a gift for meteorology and is the Walter Cronkite of Weather in the Triangle, so if he's talking about tornadoes, I suspect Miss Gulch will be flying by on her bicycle with Toto in a basket somewhere tomorrow morning.  And speaking of Toto.... 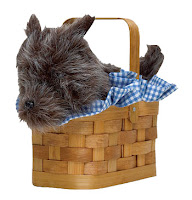 Toto was played by a dark female Carin Terrier whose real name was Terry. It's rumored she was paid more per week than the human actors who played the Munchkins. Terry went on to appear in 13 different films. Terry died around the age of 10 in human years at the end of WWII and was buried in a pet cemetery that was destroyed  during the expansion of the Ventura Freeway in Los Angles and her body was lost, but I hear there's a movement of Wizard of Oz fans who are going to put up a monument at Hollywood Forever Cemetery. ( See the kind of stuff I find surfing the Internet in the middle of the night when insomnia hits? Scott Michael's Findadeath site is fabulously morbid, non-gory reading and tastefully done if you're into biographical celebrity deaths/Hollywood history.http://www.findadeath.com/)

Moving along to something that is morbid and nasty...Touchstone Advocacy's 30 Days of Against Witch Hunts campaign continues. If you follow them on Facebook, the names of some of the people who have lost their lives during the human rights abuse in Africa are listed. Listing the names and cause of death makes what's happening a world away less of a disconnect for me. Today's list were mostly children, and I was particularly struck to see a 9 month old baby and a 2 year old toddler named. They were both burned to death. One of my first emergency calls as a young paramedic was to a house fire where four children died, and I carried the small,blackened and  charred body of a 9 month old to the ambulance. Death by fire causes the body to assume a 'defensive' position which looks like the stance of a boxer. It's found in severely burned bodies, characterized by flexion of elbows, knees, hip, and neck, and clenching of the hand into a fist; it is caused by high-temperatures in fire, resulting in muscle stiffening and shortening; it occurs even if the person was dead before the fire. I have an image of the charred bodies of those children in Africa looking like they were fighting for their lives-and they were. An ABC News report noted that some of these children are accused of witch craft because they have dark eyes and rounded bellies...Isn't that the way most toddlers look?

I volunteer as a chaplain in a local hospital a few nights a month (most chaplains aren't usually around at night, they're 'on-call' as needed). I go around to the different floor in early evening to check in because I find there is always someone who needs to be 'tucked in' for the night spiritually- maybe they've had surgery recently and need a word or two of comfort, or have surgery pending and need to talk with someone about their mortality, or simply need a smile and a blessing. I'm reachable by pager and I usually mosey down to the ER because that's where the action is. To be honest, after 25 years as a medic, I'm still an adrenalin junkie and I'm in occasional need of a fix. The Emergency Room is usually busy even when it isn't jumping, and I have enough training between nursing school and EMS to be helpful, even if that's only sitting with a patient who needs observation for mental health reasons such as severe depression, or restocking supplies. I feel like I'm contributing something and the staff appreciates it, even if my presence makes a few of the medical residents uncomfortable because they think they can't drop the F-bomb around me. proof of the power of stereotypes and how little they really know... and how much they need to learn, haha.

Occasionally the Immanent Divine puts me where I should be and where I am needed. Wednesday was that night. A construction worker who'd been pinned between two pieces of heavy equipment was flown in to the trauma center and the doctors (and I) pretty much knew that the crushing injuries he'd sustained to the lower half of his body would be fatal. Blood pressure can be maintained by application of pressure via MAST trousers or other means, but if the blood isn't maintained in the upper part of the body, when the pressure on the lower half is released the patient usually insanguates or 'bleeds out'. Sometimes the bleeding can be stopped by surgery, but many times the damage is too extensive. Our patient was clearly on his way down the River Stix with the Boatman, and I was asked to step in for a few final words. Those words are usually about heaven or hell or redemption and I answer as honestly as I can. Sometimes it's a vague answer, because I don't know where they're going when they cross the veil...I only know that Death is the Ultimate Healing. I am reasonably certain there is no pain, and I don't believe in hell. I believe heaven is what you and your faith tradition has created, so I don't know what it looks like...and I don't know if the God of your understanding has forgiven you or if there are lessons yet to learn, and I won't until I get there. In the last few moments of this man's life I am leaning in expecting to hear some sort of question about forgiveness, but this question is different," All I want to know is if God loves me." he says hoarsely. Taking note of the racy tats on both arms, it's doubtful this guy has been inside a church for awhile. My face is about a foot away from his, and we are locked eye to eye. His expression is stony. He doesn't care about godly forgiveness, and don't think he cares about where he's going once he crosses the river. I manage to nod my head and confidently reply, " Yes. You are loved" His gaze softened until he faded away.

I love the nighttime, when most other people are sleeping and the psychic ether has quieted. It's not only a great time to write, it's a fabulous time to do spell work. Maybe it's the traditional 'witchy-ness' of the shadows. Maybe it's the covering of night that makes me feel the comforting mantle of the Crone. I've always been a 'night' person and I easily resonate to that vibration and energy. The monthly Dark Moon of the Crone Mother opens up my third eye and it's the time I do most of my divination and readings because I am more connected to that place and depth.

And as a final note, I just want it known that tomorrow I am making liver and onions in brown gravy with mashed potatoes for dinner. I know a lot of people have an" Ewwww" reaction when you mention liver, and to tell the truth I used to hate it when I was a kid, but now it's a rare treat. You can blame it on my Pennsylvania Dutch ancestors. Fried liver and savory onions, smothered in rich brown gravy and accompanied by buttery mashed potatoes and Cole slaw is just about the best you can get in my book. So if you're planning on dropping by tomorrow, you've been warned.
Posted by AmethJera at 3:44 AM