Some Confusing Pagan Origins of Easter,Part 2 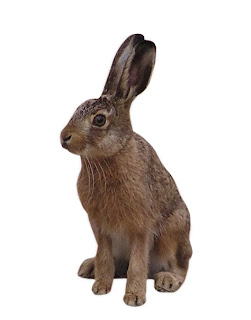 How many of you have heard the expression but don't know exactly what it means? The hare-a member of the genius Lepus-come in many varieties.Unlike rabbits which birth their young in burrows underground, the hare constructs a shallow depression in the ground and lines it with soft material such as grass and fur. Usually a shy critter, the majority of European species are nocturnal until breeding season, when they are hyperactive during the day and run about wildly, the theory being that they are showing off to attract a mate. They breed from February to September, and unreceptive females use their forepaws to repel unwanted male attention by "boxing" them.
The rejected lovers are understandably frustrated and act erratically do to hormonal shifts; essentially they have 'bunny blue balls' which drive them,well....mad.

The phrase," Mad as a March hare" was first used in English literature by Sir Thomas More in a religious tract. It became firmly rooted in the public consciousness when a rather ditsy March Hare character appeared as the Mad Hatter's s tea party co-host in Lewis Carrol's popular " Adventures of Alice in Wonderland" in 1865. The modern tale of the Easter Bunny has it's origins in the March hare; in Germany children would put out handmade grass nests ( much in the manner of hanging a Christmas stocking for Santa) for the Easter Bunny to fill with treats-but only if they'd been good. Later the grass and eggs were placed in a decorative basket for display purposes in the home.

Our history harkens back to the time when we were an agricultural society that lived off the land. People provided their own larder from livestock and grain harvest during the winter months, but by the return of warm weather, those reserves were getting scarce. They supplemented their nutritional needs by hunting for wild bird eggs-easily found in the Spring of the year as many birds were nesting. The eggs were a source of much needed protein, and their colorful shells-pastel yellows,greens and blues and tan, with spots and other markings- are the influence for the dying of Easter Eggs. The egg as a symbol of birth( and re-birth) and the beginning of life came to popular culture.

The Teutonic goddess Eostre, whose festival is held during the early Spring is said to have taken pity on a wounded hare and transformed him into a bird so he could survive...a legend which, I think, is as good an association between bunnies and eggs as anyone has come up with yet. I love exploring how our myths and legends form and change within society to explain the unexplained. All of our stories of origin are supernatural myths conceived to show how uniquely made we humans are, even the ones with humble beginnings. 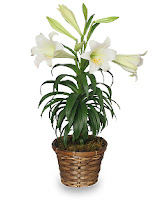 Spring flowers have always been associated with Eastertide, none more prominently than the white lily. The lily is a perennial plant which dies completely down each year: there are over 100 species of lily throughout the world, mostly concentrated in the warm northern climates. Some parts are edible in particular species and the pollen is used for food in others. Because the plant grows new each year, coming forth from the ground after 'dying', it's appearance is likened to the Resurrection of Christ. The white lily, as a symbol of purity in art, is often seen with the Virgin Mary. Gabriel, the angel who announced the miraculous birth of Jesus to Mary in the Bible, is often depicted giving her a white lily in recognition of her innocence, its trumpet-like flower  heralding  the coming event. The Easter lily is often seen in Christian Churches at Passiontide for those reasons-purity in spirit and announcing the return of the Hebrew God to earth in human form, and again being reborn in Christian mythos. The Fleur de lis ('fleu' is flower and 'lis' is lily in French) in art is a stylized lily and is seen frequently decorating Gothic churches, most especially in Lady Chapels dedicated to Mary the Virgin.

Lambs are born in the early part of the year. Ewes are in the fields ready to give birth. The name of the Pagan Sabat of Imbolc literally means, " in the belly", and recognizes this time. The white wool of lambs,their assumed innocence(they are born guileless and malleable)and the fact they were frequently used as a sacrifice in the Abrahamic religions-have been used to symbolize Christ for centuries. The Bible often refers to Jesus as " the Lamb of God", who's sacrificial death on the cross, " takes away the sin of the world". The idea of a god being sacrificed for the salvation of the people  is found in many world cultures, not just Christian. Mithras is one that comes instantly to mind. There are numerous gods sacrificed in Hindu religions...Celtic, Roman, Greek..nearly every religion in every region of the ancient world can claim this legend.

Many everyday things that were a part of ancient Pagan life have found new meaning in Easter traditions, and these have been just a few. The last 'symbol' is an action- wearing new clothing on Easter day. Ancient people wore their garments until they were threadbare and worn out, seldom having a second robe to change into. The weaving and spinning fabric were favored activities during the long winter months: by Spring the fabric was made into new clothing. The Christian tradition of 'putting on a new garment' upon becoming a believer was backed by the ancient wisdom of not putting new wine in old wine skins, lest the new wine spoil. So too the new, or reborn person dedicating him or herself to the teachings of Jesus, should cloth themselves in new clothing.

And so, we have spent quite awhile learning about some of the arcane origins of Easter-some based in factual Pagan history, some coming from myth. I hope these blogs have inspired you to research the fascinating origins of holiday traditions for yourself.

Blessed Be.
Posted by AmethJera at 4:05 PM