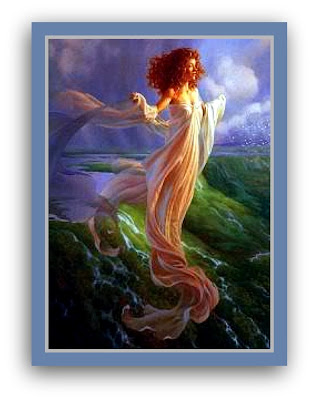 Since so many places have been affected by the wind , maybe now is the time to share a little background on the subject.

In meteorological terms, wind is the flow of gasses around the Earth's atmosphere affected by temperature-the difference between the heat of the equator and the arctic poles-and the rotation of the planet.Terrain is also a factor-mountains or valleys and large bodies such as oceans.There are a variety of names for the energetic quality (strength) of the wind: gusts, squalls,gale, hurricane,monsoon,typhoon, tornado, breeze among them. The character of these strengths are what make the wind friend or foe: the breeze of a gentle rain storm is much less threatening than, say, a severe thunderstorm.

The Hebrew word the Bible so often uses to describe the wind is ruach, which not only means wind, but breath and spirit as well. When Jehovah breathed life into Adam, His was the gift of ruach-breath and spirit.

Since most of Nature was personified by the ancients, the wind as god or goddess had many names: Vayu, Zephyrus,Boreas,Oya, Njord, Kamikaze, Miracha and Mariah. The Elemental spirit of Air called in the sacred circle is often known as a Zephyr.

Whatever you call it, the wind has movement and sound-a literal windsong, and it can be as soft as a lullaby or as harsh as a banshee's scream. It can heal or destroy, sooth and purify or disturb and unhinge. Uncontrolled and unpredictable...Such is it's power.

Wind magic includes capturing its storm-driven energy by tying knots in a thread to save for later releasing ( to amplify the power of a spell), listening to the voice of the wind through the ringing of a simple bell hung in a window ( or better yet, a windchime), and writing your intention on a piece of cloth ( yellow in some traditions) to be hung outside and allowing the intention to be carried by the wind. Tibetan prayer flags are an example of this type of magick.

The highlight of a trip to Hawaii of a very good friend of mine was going to a mountain top on Maui and leaning over a cliff into the wind to allow the local  'aumakua or wind deity, to blow away all of his worry and depression as a sort of rite of purification. It was a powerful yet simple act of faith...and it was effective because he returned home happier and healthier than he had been in years.

Pagan friends here in North Carolina who appealed to the spirits of the wind during the devastating  tornadoes of  the week before Easter swear their prayers helped spare their homes from destruction. I can speak  in  this regard because during the stages of storm warnings and tornado watches, Pagan (non-Pagan) friends from  all over the country kept track of the storms on Facebook with me and sent protective energies....and our house was not effected. We only had a few leaves and small broken branches.Downtown Raleigh within walking distance looked like a war zone, trees fell on the street where we live, wires came down all around us....and we never lost power or sustained any damage. I have to believe-and give thanks- to an Immanent Divinity who I believe heard those supplications and showed mercy.

Wind of Land and Sea,
Spirit with a thousand songs
You lift your Voice
And sing sacred songs.

Mysterious One,
Blowing across water and earth,
Sing a blessing for us
Upon All Relations.

Blow your breath into us;
Renewing and giving Life.
Allow your Spirit to remain
Upon this place now Holy.