From My Personal Grimorie: Some Thoughts on Healing 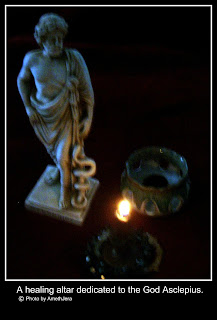 Every thing we do in our magickal work hinges on one single aspect: belief in yourself. Witches, shamanic practitioners, healers of every type must first have the knowledge, and then believe in their abilities.

Every good magickal practitioner knows that the will is a key feature in successful spell work. Lacking one or the other is often why spells, hexes or other types of conjuration fail. It takes more than simply assembling the tools and writing out the spell: it takes acknowledging unfailingly that what you are about to do is going to work
(hopefully in the way you planned, but the gods and the Universe sometimes have different ideas about it!).The four Precepts of the Magus are once again at play: To Know, To Will, To Dare and to keep Silent.

Allow me to add a couple of my own....purity and clarity of intention. Healing work is done by nearly every practitioner, no matter the path followed. It is most often  the first spell work those new to the Craft attempt ( next to the ever popular witchy no-no, the love spell.)

One would think it would  be rather simple-just ask for healing-but it's not. You need to be very clear on the purpose of the working- is this something the individual in question wants...or is it something you want? You may have all the good intentions in the world for someone you love, but if you do not have that person's permission to conjure on their behalf, the intention has lost just a bit of it's purity.Why? Because you've foisted your own will against the free will of the other person. Not every one wants to be healed, and not everyone should be healed. ( What did she just say?). Healing comes from a desire for wholeness and  to be restored to the highest level of function in which the human body may operate by the individual. It's not up to you to take any magickal action on the others behalf on your own.

Maybe he or she doesn't want (or need) your intervention-this happens in many 'mixed' faith families where witchcraft is still seen as something wrong or evil. When someone is in pain or otherwise preoccupied, when they are upset, etc., it is not a good time to try to educate them. In that instance, it's better to just wish the other well in your heart and leave it at that. They really don't want your help, and forcing a ritual on another is a serious  conflict of interest cosmically and it can lead to legal action if you continue to insist-so don't. Sometimes I may say a quiet prayer later that the individual receives whatever they choose to assist them with their situation. Technically you can send energy into the Universe ( privately) for the individual to use at will, when and if s/he is ready or willing. Insisting on 'helping' is not helping and may cause an avoidable crisis.

From my own experience, when those around you find out you are an occult practitioner, you will often be asked to intercede on behalf of another individual by them. This is always a bit flattering- we all have an ego that occasionally needs a bit of healthy stroking. But be certain to listen carefully to what they are requesting and ask questions to clarify this is something you want to be involved in? Sometimes it's not. There are times when the expectations of a person outside of the Craft is beyond reason. It may also be something above your level of expertise; and  in that case, I wouldn't hesitate to recommend a practitioner with more advanced skills- and then ask  him or her if you can be present so as to learn ( always take the opportunity to learn from others in person when you can!)...Or it just may be something you are uncomfortable doing ( no matter the reason)- listen to that small voice inside you-that's why it's there!  I'm of the opinion that when something can be solved by more mundane methods, the use of  magick is inappropriate, so I urge you to think things through carefully before you get involved with someone else's healing. 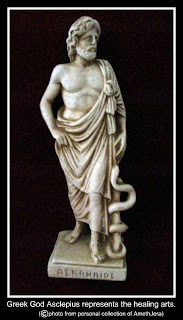 It's my opinion that  a practitioner who performs healing spells on a regular basis should develop a solid relationship with a deity they can connect with and work through. Doing your homework and having as much background as possible will not only benefit you, it will will show a level of commitment to the deity whom you wish to approach. Witches do not make demands of the gods, but neither do they crawl on their knees to merely touch the hem of the god/dess in question's garment. If you feel you cannot call upon a  particular deity with confidence, then either you lack conviction in his/her ability-or lack confidence in your own ability. Perhaps you have chosen a deity inappropriate for the situation, or you need to accumulate more knowledge or experience. The old saying, " Don't call up what you can't put down", doesn't just apply to demons and spiritual entities, but to situations as well.

When I was  a paramedic, I developed a relationship with the Greek God Aesculapius, patron of the medical arts. The straight staff with a single snake coiled around it- the symbol of this particular god- can be found within the Star of Life, the blue and white emblem used by most Emergency Medical Technicians and Paramedics today. I can honestly say that calling on Aesculapius daily throughout my tour of duty made me more intuitive and skilled at my job when rendering medical care. The goddesses Hygieia ( Hygiene),Aceso ( Healing), Agelaea ( Health), Iaso ( Medicine) and Panacea ( Remedy) are his daughters and my be called upon for specific aspects of a spell. 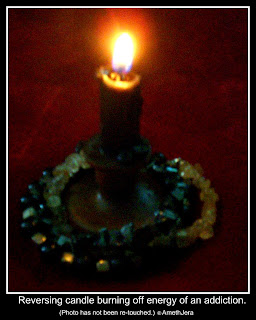 The photographs that accompany this article were taken during a working done over several days that involved the release of the individual from multiple addictions and depression triggered by chronic physical illness. I prepared a healing altar by first washing the table top in spring water and rubbing in lemon oil for purification of the area; it was then covered with a deep red velvet cloth upon which were placed a likeness of Aesculapius, a small bowl for incense ( I used eucalyptus for it's cleansing properties) and a black candle dressed in the All Heal Oil that I prepared from the recipe listed in an earlier post. I rolled the dressed candle in sea salt and placed it in a holder, then surrounded  it with bracelets made of hematite, jet, silver and quartz. The choice of a black candle rather than a green one is strictly personal because I felt that the problem had been a long standing one  in which negativity needed  both drawing out of the individuals aura while simultaneously deflecting new negativity being attracted by the active addiction. The stones were specifically chose for their powerful ability to protect the individuals vital energy. Hematite has long been considered as a stone that promotes healing through the resolution of anger and emotional pain. Jet, which is not a true stone but was once a living organic wood, was often crushed and burned by the Egyptians to drive out negativity at the soul level. Silver is a healing metal representative of the moon, but also of water and balances the predominantly male energy of the other two black substances. It has magickal aspects not only of  loving and healing, but of energizing the psychic mind as well. Finally, clear quartz was used for it's ability to be programmed to imprint a positive vibration to fill the gaps left by the waning negativity until the actual healing took place. I especially love the ability of quartz to focus concentration and the way it enhances my focus during long or difficult workings. I find the balance and harmony it brings to any situation powerful because it tends to channel  in Universal energy for me which fine tunes my diagnostic ability. It has been my experience in using these stones in concert with one another that they have a stimulating affect on the immune system of the individual in question and brings the body into balance. The combination of oil, salt,candle, metal and minerals act as a deep soul cleanser and reset the disconnected physical dimension with the mind-something very much needed by an individual who's been drained of life force by an addiction.

The actual beginning of the text that accompanied this particular work was adapted from the rite of exorcism because I wanted to set the tone that the individual wanted the addiction and any lingering malefic energies cast out of his body and mind. I felt the best way of doing this was to command that the addiction to release him and leave, treating it as a living thought form ( which I believe addictions are, and therefore gain their power). Once the addiction was told to leave, I smudged the area with sage and sweet grass to seal the void left by the absenting desire and harmful behavior and turned it over to the God. As the Deity began the actual spiritual and physical healing, the lingering harmful energy was destroyed on the astral plane and manifested in a brilliant, yellow, orange, red, blue flame which grew more and more intense as the addiction was being consumed. The photograph of the candle which was taken during this phase of the ritual has not been edited in any way other than to be re-sized and framed. The colors are true, and if anything, a bit more dull than they actually were, which I attribute to the limitation of the digital format.

This ritual has had a positive affect on the individual for which it was performed, and I believe it has benefited him. He has ceased several of the addicting behaviors and is attempting to control others, and he also believes that the ritual was beneficial. He has markedly improved physically and mentally since the time this was performed a couple of months ago. There was a brief set back, but he is also working to heal himself through modification of behavior and spiritual practice. I am pleased that he has been seemingly proactive in his own healing and taken to heart the words of the Charge of the Goddess, " That which you seek you find within yourself.", because I feel that  addiction is a type of soul loss that requires various levels of intervention through alternative healing methods. My suggestion to him was to keep up with his own meditation and path-working, but to add a a form of external healing such as Reiki or Therapeutic Touch as he began to feel stronger and more in control of himself. I also urged him to continue study and spiritual direction, and to consider a 12-step program for moral support.

Posted by AmethJera at 5:06 AM