Hard to believe we're already half way through the year...it was just the New Year a few months ago, wasn't it? The weather has been milder than usual here in North Carolina-which believe me- is much appreciated in a house where air conditioners are verboten and the electric fans run double time. 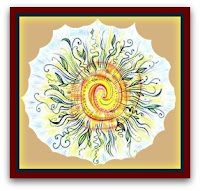 I've needed a few private " me " days to take stock of things; I think we all do...Nothing major happening in my life. I just needed some time to sort and re-group. Six years ago I began to write a book just after Hallowe'en when we begin that slippery slide into the Christmas holidays when I always want to put on the breaks. I wish there was an extra month between Thanksgiving and Christmas because I think Thanksgiving and early winter get short-changed by all the HoHoHo and HumBug. It was a little book of devotionals written from a Pagan perspective: I posted the first part of it to this blog  just before Yule last year, you might remember...it's called Seeking Light in the Darkest of Days. Well, now that part of the little book is a chapter, and the whole thing  has expanded into a journal of devotions, rituals and eclectica  that covers A Year and A Day, which I hope to have finished by Samhain. Writing is a passion, and not quite a vocation- I make no money from it, and I don't expect to become a famous author with A Year and A Day because it's simply someplace to share all the cool stuff in my many volumes of grimiories ( silly me, I thought there would be only one...try 20 or more, in spiral bound  and loose leaf notebooks, the latter being the favorite format because of the ease of adding and shifting things around.) That's what's been happening with me...Meanwhile...back to your regularly scheduled blog... 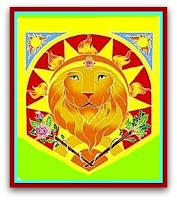 While I love celebrating the seasons, I have to admit that Summer Solstice is probably my least favorite. I don't mean that in a negative way, it;s that I'm not a Summer person. The beach is something i enjoy in march when the tourists are all gone and the ocean is cold and no longer fishy smelling. There's a lot to be said about the Summer...by someone else, not me...I'm an Autumn person. Yeah, I know every thing's in full bloom and the vegetable garden has begun to produce a wonderful, healthy abundance of fruits and vegetables and the trees are full and green and people are out having a hell of a good time cavorting in the sun, surf and sand...but that isn't me. I'm not in a place where I can plant and cultivate a garden, and I love the connection to the soil, my heart just simply overflows with joy watching all those little green things I've prayed over sprout and grow into beautiful things to look at and good things to eat. My last garden was 30 feet by 40 feet in the backyard of the house I later sold, and I was out there 3 hours a day hoeing, weeding and picking...and patrolling for garden pests. I planted everything I could think of from cucumbers, tomatoes, green peppers, zucchinis, three kinds of beans, peas, potatoes,onions, scallions, corn and yellow squash. My Grandmother and I ate very well from the garden that summer, the next to her last, when I had to give up agriculture for care-giving. That's my kind of summer vibe, and that's where I come from when the Solstice rolls around...it's all about the potential for abundance in life for me at this time, because there is no guarantee those plants will make it in the heat with minimum water, that garden is going to either burst forth or be a dried up patch of weeds...Kind of like Life. 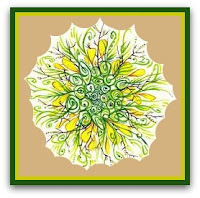 More appealing to me is Litha, which is officially on the 25th of June ( the Solstice being on the 21st). I love the mythology ( and reality) of faeries. There is something that appeals to the Irish part of me when the Fae are concerned...The lustfully heavy trees and bushes, rings of wild mushrooms, violets, hydrangeas, poppies and gardenias are all potential places of enchantment in Summer moonlight. Fireflies lazily blinking, crickets chirping and tiny peeping tree frogs that have crawled out of the ponds around the yard all lend their voices to the magickal place that is the back yard in the daylight. Personally leaning toward Nightkind, I can hear the ether thrumming in the wee hours of the morning when I am frequently writing these blogs. Most of the time it's when I meditate or conjure, but I am often distracted by things moving around in the darkness just beyond my bedroom window, and on many nights I sip tea and join the Watchers through the wee hours until dawn.

So more than likely, when you are out spiral dancing Summer in, I will be  placing little dishes of milk and honey at the base of the trees and leaving a shiny new penny to delight the fairies in the Other World of Fae.
To each their own, this is a wondrous Craft we create and celebrate to our own soul's contentment.

On to Chris'em...I'll bet you have no idea what that is, do you? Chris'em is the 25th of June, exactly six months prior to Christmas. I have no idea who first came up with the day, or why anyone felt we needed to celebrate, but I suspect it took place because it could. When I was running the Health Lodge ( uh, nearly 30 years ago..yikes) it was THE THING the camp staff looked forward to during the season because it was the Summertime version of Misrule and they could be insanely creative for a day or two before falling back into the weekly grind. Things like the tines of the huge institutional potato masher in the Mess Hall were converted into a candelabra, wreaths of honeysuckle and ivy appeared on doors as the Summer counterpart of Christmas wreaths, and everyone was just a bit jollier...if not more prone to practical jokes. Camp-made Chris'em presents were created and appeared anonymously. I think my favorite was a tiny bat complete with batty habitat all housed in a 2 liter Coke bottle- a gift from the Nature Lodge staff for treating all the cuts, bruises, poised ivy rashes and snakebites they produced during the course of the 3 and a half months I was the resident Healer/Hedgewitch/Mom substitute and coffee provider in the Health Lodge. I awoke one morning to find a beautiful, fragrant garland of woodland flowers carefully tacked around the front door to the Health Lodge and a pot of white pine needle tea...now that's how I like to celebrate Summer. ( The fact that I  had earned their respect by successfully treating the sick and injured in ways that were quite a departure from the Red Cross Advanced First Aid Manual and forever instilling an air of mystery and witchiness in the Health Lodge helped, I'm sure. They never knew the U of  D agriculture professor running the Nature Lodge and I were in cahoots when I was doing all these seeming magickal things that were actually homeopathic medicine in disguise and approved by the medical doctor I reported to as the licensed Medical Officer.) A few staples like baking soda, chocolate,vinegar and flat Coke became the stuff of witchery when doled out with mystery and psychology with a bit of psycho-pomp thrown in for good measure. It's good to be the Head Witch sometimes ( *cackle* *snort* *grin*) For every homesick, forlorn first-time  Boy Scout camper, there is a Scout Master ready to succumb to a case of cold feet and camping freak-out at a moments notice.

So go mix honey in the wine, weave a daisy chain circlet, and pick a ripe tomato for me...I'll be here whipping up the next installation of this blog.

Solstice Blessings- and stay away from the fairy rings! They steal people, ya know!