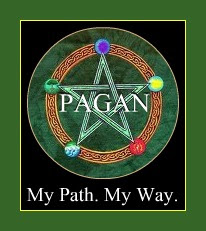 I appreciate a good debate (that is kept civil) because it causes us to grow beyond ourselves, to explore otherwise unknown territory, and go places we might not otherwise go on our own. We in the Pagan community are particularly good at this: we analyze everything. Taking things apart to see how they work is one of the main ways children learn about their world. They take nothing at face value and want to see how the individual parts fit to make the motor run. That's an over-simplified example, but it pretty much says it for me. We deconstruct to understand the end product.  Mostly, that's a very good thing- until it turns nasty and elitist and we start ripping things (and each other) apart. This is our biggest down fall.

Every so often there are hot-button topics that go viral through the Pagan community, and when the initial upheaval dies down, then we can re-visit and discern what was at the center of all the excitement a little more calmly and with our wits about us. You can't say we aren't a passionate bunch, because most of the time whatever is being discussed reaches the volume of mating elephants with a lot of stomping and trumpeting. I usually either join in early and get my opinion in, or hang back and watch what happens. With this latest round of fireworks, I have done the latter. And frankly, I haven't been as engaged as I probably should be by other people's standards, because it's "the responsible thing to do", but the fact is, I've been around the neighborhood with this one a few times, and I feel it doesn't merit as much of my attention because it's not an issue for me. Personally...I have already made up my mind.

The current elephant mating-dance level discussion in our community is whether or not we should continue to call ourselves Pagan. It's an old favorite that seems to get trotted out every few years or so by someone in the community who is attempting to define themselves out of the vast inkiness of our language and thinks the rest of us should join in on chewing on the carcass like so many jackals. But instead of simply saying, "Hey, I'm trying to figure this out", they manage to start such a large fire under the cauldron that
it burns out of control. Instead of enjoying a taste of the soup, we are suddenly bringing in more wood to keep the flames licking at the pot, which keeps things so hot that no one can get close to the real issue without having to shield their eyes from the brightness of the fire. We don't enjoy the simplicity of the broth because we're too busy adding ingredients "to make it better", and what we end up with is a soup so thick it requires chewing rather than mere sipping just to digest it. That doesn't always make it better, it just makes it more complex.; and  while complex ingredients can be appreciated on many levels, it doesn't always make the final dish better or palatable to everyone.

At the risk of sounding like I crawled out of the primordial ooze at the dawn of time, it's been a long time since I made the first serious examination of the main points of my personal path.I pretty much stick with what I've got. The reason for this is because I laid a foundation and built my spiritual house on solid ground, instead of buying a prefab house. I added to it over time all the elements I found necessary to connect me to what I understood as imminent divinity and fed my spirit, the result of which is a rich broth I find tasty and nutritious. Occasionally I adjust the seasonings as my tastes change, but I think that's the beauty of having a good  basic recipe to start with.


What has come out of this is that I am satisfied by what I believe and I am comfortable with my worship today. I realize that not everyone is at that place yet, but frankly, that isn't my business because I am too busy tending to my own formation and growth. I practice as I choose, when I see fit, as I am lead by Spirit. I own no one an explanation, or justification, and frankly, I'm beyond needing validation from others.My Path. My Way. I don't mean that harshly, but I am very serious about it. I know what I like- and it is my choice and my right to do as I please without interference from others.You are free to believe anything you want and have your own opinion about your personal path. I'm open to discussion about what I like and why it works for me with anyone, but if you are here to argue and pick, then get out of my sandbox.

For the most part, I am satisfied with referring to myself as 'Pagan'. I don't dislike the word, even though I wish there were something that carried a little less baggage in mainstream society. Personally, I think that Pagan as an umbrella term pretty much covers all of us who are not adherents of the Abrahamic faiths, including Buddhists, Native Americans, Hindu, Wiccans, polytheists, pantheists and monotheists of many pantheons,   occultists, reconstructionists, and those of alternative religions little known in the mainstream. I am well aware that the Latin Paganus loosely means 'country dweller' or 'peasant', and that to more than a few people it is a pejorative term. Much like the word witch, I do think we need to continue to reclaim and redefine the meaning for the general public.

We are never going to do that, however, if we continue to get into heated arguments and flame fests thinly veiled as legitimate dialogue among ourselves. The general public only requires a few meaningful sentences to define Pagan, not a treatise, because due to human nature, anything else is TMI that will not be processed. If more information is asked for or required, then the conversation can certainly continue, but overwhelming the man on the street with a convoluted history in its entirety  is just going to have most wishing they never asked. I think we need to get it down to an elevator speech, the theoretical time of an elevator ride, or two minutes, tops.

Maybe it's less of an issue for me because I've been a Pagan for over a quarter of a century or because I am also a Unitarian Universalist. The UUs are governed by seven principles and a set of sources which are only meant as a guideline.Chief among the seven principles is the inherent worth and dignity of everyone, acceptance of one another and encouragement for spiritual growth, a free and responsible search for personal truth and acknowledge in the interconnected web of existence. Since I'm only using this as an example, and not trying to make converts, you can check here for more information if you choose:  http://www.uua.org/beliefs

I find these things valid as I define what Pagan is for myself...because I can only define that for myself . I may have my own opinion of what that is, but it is my opinion and matters not one single wit in how another journeys their path even if they identify as Pagan.