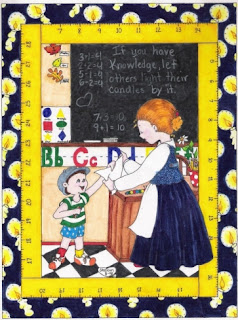 From the first through fifth grades, my art teacher was Mrs. Shaw. She was a small, dark-haired lady with a big imagination, and my inspiration to continue in the arts until I, too, was an art teacher. I haven't thought about her in years, but I still have one of the projects I made in her class- an imaginary animal. It was the first time I'd worked in clay that could be fired. My imaginary animal has a low, flat body with a dog's head and alligator's feet. He's not particularly scary- in fact, he has red lips curled into a smile. He was on display in the principle's office for a couple of years. Right now he's packed away in a box somewhere waiting for both of us to get a new home.

My scholastic career was less than stellar. Being in school was preferable than being involved in all the drama at home, but our little neighborhood school was nothing special. It was just like every other school in the 60's and 70's. So other than art class, nothing really caught my eye-and I don't remember the names of most of my teachers.

What I do have a clear memory of was becoming a teacher- and art teacher, in a private school for children with learning disabilities. I worked with most of the student individually on an individual basis, then gathered all my IEPs and reviewed them with the school psychologist. Charlotte Taylor was a fascinating woman- she'd managed to earn her PhD while quietly enduring the insults of post-polio syndrome. She walked with crutches, but she could drive a car-an Audi. We became fast friends outside of school, and Charlotte was the first person outside the family who had faith in who I wanted to be and what I wanted to do with my life. She encouraged me in earning my post graduate degrees and inspired me to go to seminary...and she introduced me to Al Anon, where I learned to cope with my grandmother's alcoholism and Pop's anger. I owe a huge debt to this woman and I wish she was still in my life, but she's gone to a better place a while ago.

For these two wonderful women who touched my life, I am thankful.

Posted by AmethJera at 2:36 AM