My Reason for the Season 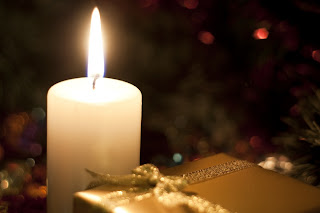 We do not live isolated from one another, nor does our society exist in a vacuum. We are a nation of people from many countries and religious backgrounds. We all have a constitutional right to celebrate and worship as we so choose.  It is in that spirit that I firmly believe that no single group or religious entity has sole sovereignty to dictate how we greet one another in the spirit of goodwill. 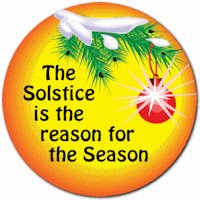 The point is that there are many holidays in December--Christmas being only one of them. Jesus is  the "Reason for the Season" for only a select group in the population. Non-Christians and those who declare no affiliation but are spiritual out-number Christians by two thirds in the world population. That should tone the herald trumpets down just a tad. I admit that I am disheartened and slightly disgusted by the yearly outbreak of  the 'my religion is the reason for the season' hubris. To begin with, the actual, scientific reason for the season is the tilt of the Earth which creates the solstice. Everything else is a matter of faith, dogma and conjecture heaped up by humans. It's all mythology -not a bad thing because our ancestors used folklore to explain natural events. Weaving a metaphysical tapestry to wrap themselves in was comforting. The natural world was less merciless and frightening if there was something humans could relate to in a story.

I will continue to greet my Christian friends with " Merry Christmas", but I will not insult my non-Christian friends- who are Buddhist, Hindu, Jewish, Baha'i, Pagan, Atheist, Humanist and a various mixture of undeclared spirituality-by intoning "Merry Christmas". I will wish those loved ones a tiding of good will that encompasses their faith tradition without compromising my own: " Happy Holidays"

In the same breath I will admit that I have a knee jerk reaction to reply "Merry Christmas" to anyone who says it to me...purely out of doing so for so many years. The issue I have is with individuals who deliberately force the blessing of their God upon others maliciously and knowing full well there is a hurtful connotation to the recipient. There is a difference between an innocent expression of your faith and intentionally using that expression as a theological weapon. My friend Moz is a Rabbi, and as such always wishes me a "Happy Hanukkah ", meant as a lovely gesture which shares the essence of the Festival of Lights between friends. It is not an attempt to force the tenants of the Hebrew faith on me or co-opt my personal religious beliefs. I take it in the spirit that he means to wish me a similar blessing reflected by the story of how a single day's worth of oil continued to burn for eight days. I gratefully accept his wish for prosperity and unexpected abundance, which is exactly how he means it. He is not trying in anyway to make me a Jew or to assault me with a notion of Jewish superiority. The same goes for the majority of my Christian friends who only wish to share the good tiding and great joy of the birth of their God. I can relate to their excitement, because that is happening in my own faith tradition with the return of Sol Invictus. Neither of us are speaking words of conversion, only joy. That is how I believe it should be.

What does raise my hackles is the in-your-face, chip on the shoulder attitude of some overbearing fundamentalist Christians who have been recently using social networks as a means to spout off to anyone within hearing distance about how an imaginary  unnamed authority is trying to force everyone to give up their God-given right to say "Merry Christmas". This victim mentality causes me to have an urge to puke no matter who or which group is doing the whining, because it is unsubstantiated and maliciously conspiratorial. It plays on the public's emotions in an unethical and immoral manner because it is simply another version of the psychological game of "Someone one is out to get me, ain't it awful?", done purely to elict a gut reaction from others who always cheer the underdog. As if this pathetic grab at attention-getting wasn't enough, it also has an underlying selfishness. It is nothing more than a self-serving cry of false victimization.

This is not the message of peace and brotherhood as told through the story of the birth of Jesus. I will name it what it is: a childishly manipulative attempt to force others to submit to the will of another and it is the providence of bullies.

I'll share a little secret here: I personally hated this nattering bit of bullshit  when I was ministering in the Episcopal Church, and a majority of mainstream Christianity feels the same way I did then and still do now.  The braying of jackasses does not contribute to the song of the heavenly chorus. If saying "Happy Holidays" instead of " Merry Christmas" takes Christ out of Christmas for you it's because you allow it.

We live in a diverse world full of celebration, joy and wonder. Being considerate and respectful of religious holidays  observed by others is a way to begin healing our divisions. It is an authentic way to further dialogue in the mainstream faith community. It's the right and loving thing to do, and it is such a small step to take.

Posted by AmethJera at 7:04 PM