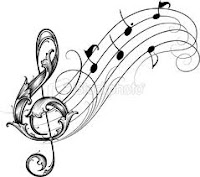 I have always said there was a soundtrack to my life. What I'm doing at the moment or the mood I'm in dictates what I'm listening to-and I listen to all types of music,so it's difficult to pick a genre. It's all inspirational to me- the differences are the level of inspiration.

I grew up listening to some of the best music ever crafted. My grandparents played the music that they loved and was meaningful to them-most of it from the 30's when they were married and the 40's during the war.  We always had a record player of some sort in our house-and it was truly just a record player, not a stereo system. Other than that, music came out of the radio that sat on the kitchen table, or later from the small battery-powered unit in my bedroom. I have memories of being glued to that little box for the entire summer of 1969, so Bryan Adam's Summer of  '69 stands out for me. During the 60's, folk music gave me a social conscience because I became aware of the world around me in a very tangible way- through the freedom marches and the anti-segregation demonstrations. Because I was just kid, my understand of those things were limited, but I knew what was being sung about needed a voice. Later, when I did understand, those songs helped mold my sense of right and wrong-and they still continue to do so today. The simplicity of a Pete Seeger song can still inspire me to examine what is going on around me that needs attention in society.

Like so many in the 70's, I listened to the quasi-country music of John Denver, and later, I had the privileged of working with him. I can tell you that being in a touring company opened my eyes to how music is actually put together and produced before it ever reaches the public. Songwriting is incredibly hard work- the lyrics and music may just flow out of an artist, but arranging what you hear in your head so other musicians can play it is nothing short of miraculous. My two favorite JD songs aren't popular ones-Christmas for Cowboys for the holidays because I have been on a cattle drive in the winter at night with a thousand stars and a cup of coffee by a campfire ,and The Wings That Fly Us Home, because of it's recognition of the dignity in all things human.

I'll admit I have a fondness for 80's music, as cheeky as some of it was. Much of what was  written is about sorting out romantic feelings or relationships, but it was buried under layers of over dubbing and gung-ho orchestration to become dance music. If a pop tune is over 3 minutes long and doesn't have a 'hook' to inspire interest, it's dead in the water, and that was never truer than in the 80's-which is why we're still slap-happily singing Jessie's Girl in karaoke bars 30 years later.

I'll admit that after that period, most of my musical experience gravitated to classical and progressive jazz, because in my opinion popular music became a sort of wasteland after the 80's. I was also paying more attention to the classics because I had graduated from a Christian seminary during the mid 80's, and a lot of Anglican Church music originates from Beethoven and Bach. You can get lost in good classical music, riding the swells and dips- it's quite a roller-coaster if you climb aboard and relax. The Church is where I learned to love the meditative lilt of chant,so later in my spiritual progression as a Pagan, chanting was comfortable and came easily. I was listening to the music of my ancestors out of Ireland and Scotland now because I had a closer connection at a soul-level: Lorenna McKennit, Kate Bush are pretty much my heroes. A tip of the hat goes to John Whelan, because he brought the common tunes of Ireland into the popular genre through the magnificent Riverdance.

So once again, I've made no actual choices, because I embrace so many types of music-For this I am thankful.

Posted by AmethJera at 4:20 AM